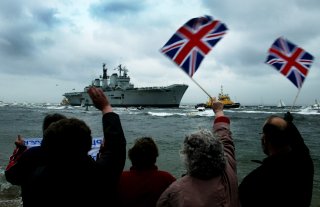 At the risk of inducing vertigo, turn things around once again and project today’s strategic situation in Asia back to the Atlantic in 1900. In this alt-history world the distant marine hegemon, Britain [playing the role of contemporary America], remains the undisputed master of its home waters, at liberty to dispatch fleets where it will. It enjoys fraternal ties with a Canada [Japan] that has built itself into a great seafaring power, hosts Royal Navy fleets, and is determined to preserve British maritime supremacy vis-à-vis a nearby and overbearing United States [China]. And London can court a Brazil [India] eager for help balancing against U.S. overreach in the Caribbean or South Atlantic. Faced with such an imposing coalition, America may never have met the Mahanian standard for naval power. It might have remained in its box for a time—or forever.

Image: People wave as the flagship of Britain's Royal Navy HMS (Her Majesty's Ship) Ark Royal approaches Portsmouth Harbour on the coast of southern England, after operations in the Gulf conflict, May 17, 2003. REUTERS/Michael Crabtree