How America Can Counter China In the Energy Competition 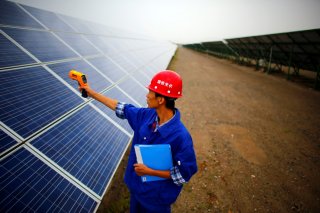 Last Monday two of the World’s most established Newspapers — The Washington Post and the New York Times — published clear unequivocal condemnations of the lie known as “China’s Peaceful Rise;” a false narrative promoted throughout the world by President Xi Jinping, since his arrival in office in 2013. Instead, “Mr. Xi made it clear (in remarks celebrating the 100th anniversary of the founding of the Chinese Communist Party (CCP)), that China under his dictatorial rule will present an escalating threat to the free world and to China’s neighbors – especially Taiwan, the capture of which he termed “a historic mission and unshakable commitment,” according to The Washington Post editorial.

In the New York Times, Bret Stephens was more emphatic yet offered hope in saying “appearances of strength tend to obscure realities of weakness, hidden cracks behind imposing facades. For Beijing, the noteworthy point is that the regime is based on lies. It isn’t just the historical lies, such as Xi’s omission in his speech of any mention of the Great Chinese Famine, the Cultural Revolution, and other atrocities in which Mao killed as many as eighty million of his own citizens. Nor is it merely the political lies, such as Beijing’s aggressive propaganda campaign to hide human-rights atrocities against the Uyghurs of Xinjiang.”

Still, notwithstanding this welcome awakening stimulated by these worthy journals, their alert is late in coming; in less than ten years China has penetrated – and gone far toward dominating – more than eighty sovereign countries. Communist Chinese engineers and students have stolen billions of dollars in intellectual property over two decades. How is such breathtaking aggression possible? And why has it taken us eight years to recognize this new goal of empire let alone to develop a strategy for overcoming it? First a word on China’s methodology.

China understands that armed conflict and the risk of escalation are to be avoided if possible and that a more subtle approach toward conquest must be adopted. Ironically, they have taken a page from America’s playbook known as soft power and corrupted it. Over the past eight years, China has developed the Belt and Road Initiative (BRI), a strategy in which China relies upon seemingly benign offers to build various kinds of infrastructure (i.e. roads, pipelines, railroads, and power plants), and even to provide loans and Chinese labor to carry out the projects. Over time, however, as the host government finds itself unable to service its debt to China, Beijing offers to convert the indebtedness to outright ownership – takeover. Before long China owns and operates the power plant, port, or pipeline, and enjoys a dominant influence on host-government politics. Energy is a special case due to its unique role in determining the stability of any country. Why?

Assured access to clean, reliable energy is fundamental to the survival and prosperity of every sovereign country. Without abundant baseload power nothing grows – there will be no industry no jobs, no farming, schools, housing, science, or healthcare. In short, sovereign control over clean, affordable, resilient energy is the sine qua non of a nation’s survival and the leading measure of its national security and must be seen as such and not simply as an economic and environmental issue. Beijing understands that insufficient baseload power is the most salient vulnerability of free-world countries. China understands that if it can gain control over the supply of a country’s energy, it will control that country. Toward that goal, China has adopted a clever two-stage strategy: first weaken a given country’s energy resilience by, for example, encouraging an over-reliance on renewable sources – built by Chinese solar makers [China wields 70 percent of global solar panel manufacturing now]. Wind and solar power are surely sensible components of every country’s energy mix, but not at the expense of reliability and resilience. Therefore, a nation’s first goal must be to build, deploy and operate systems able to deliver clean baseload power with high-capacity factors (i.e., percentage of round-the-clock delivery of design capacity). These systems must also be capable of powering the unique challenges of each country beyond electricity to include district heating, desalination, process heat, and the development of alternative energy sources (e.g., hydrogen). So where does the free world stand toward achieving these goals?

The good news is that for almost five years an awakening has been underway in the U.S. nuclear energy industry. The sobering truth was unavoidable; large nuclear plants took too long to build and were difficult to finance. This reality has spawned more than a dozen promising initiatives; all of them oriented toward designing smaller modular reactors (SMRs). That is, reactors that will be built in a factory thus enabling components to be delivered to the site for assembly in a third of the time and at half the cost. Further, these new SMR designs will meet the requirement already mentioned for versatility; they will provide reliable baseload electricity 24/7, but SMRs can also deliver process heat, power for desalination, and for making other sources of energy (e.g. hydrogen for fuel cells).

Help is also on the way to put financing these smaller plants within reach for virtually any sovereign country. Look for SMRs to be licensed and available in the United States, Canada, the UK, and beyond within three to five years.

In addition to its focus on energy, China’s BRI is also focused on capturing critical resources (e.g., cobalt and lithium), strategic terrain (i.e., ports, straits, and military basing rights), and assured access to the world’s leading markets (i.e., Western Europe and the United States). Today China is already a full or partial owner of 96 commercial ports in South Asia, the Middle East, Western Europe, and the Americas – we face a strategic juggernaut playing for keeps. China is clearly on the march and as Captain Jack Aubrey would tell us, “There is not a moment to be lost.”

And, the response in the arena need not be to mimic China or Russia’s State-Owned Industries. Rather, by teaming with U.S. allies in technology and by tapping the plentiful capital markets of those allies, the United States can better mobilize innovation and private capital partnerships for clean energy and national sovereignty. Collectively, the United States, UK, and Japan together comprise more than 60 percent of global capital markets. China is less than 5 percent, and Russia is insignificant. The United States has the edge and should use it.

Robert McFarlane is chairman of an international energy company and a former Assistant to the President for National Security Affairs.