How America Can Save Belarus from ‘Europe’s Last Dictator’ 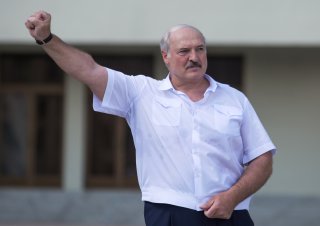 One of my indelible early childhood memories in Soviet Lithuania was joining hands in a human chain of two million people across the three Baltic States protesting Soviet occupation in 1989. Soon after I moved to Los Angeles, but my first brush with freedom of expression and civil society sparked a lifelong study of democratizing states. This Sunday people will organize another human chain from Lithuania’s capital of Vilnius to the neighboring border of Belarus shining a light on the movement for democracy and freedom in the “last dictatorship in Europe.” But the most important hand that could be held out to the Belarusian people must come from Washington and Brussels.

Over the past week, young and old Belarusians have filled the streets in the capital Minsk protesting a rigged presidential election. The protests have only grown in size and spread across the country even as standing President Alexander Lukashenko pursues a ruthless crackdown on the protestors and an internet shutdown. The opposition presidential candidate, Svetlana Tikhanovskaya, found refuge with her children in Lithuania. Her husband remains jailed in Minsk. Still, the Belarusian people have not cowered and Lukashenko has increasingly been striking a cautious and conciliatory tone, which he even expressed during an orchestrated visit to MAZ truck factory after workers began chanting for him to “Leave.”

Vilnius and Minsk are just about one hundred miles apart but represent different worlds. Vilnius is a busy capital in the European Union. Within NATO, it is known for having the fastest internet in the world and for having a vibrant start-up community. It exists in a country that quickly established democratic institutions and a market economy after regaining independence in 1990. Meanwhile, Belarus appears to have been stuck in a Soviet time warp for the past thirty years. It gets by on a semi-planned economy.

Politically, Belarus has been little more than Lukashenko’s personal fiefdom since he won the presidency in the country’s first elections, which were in 1994. Despite occasional flirtations with the EU and China, Belarus remains Russia’s last foothold in Europe and its last allied Slavic nation. Yet, the Belarusians have changed. The population has been experiencing a cultural revival. People no longer see themselves as Lukashenko’s obedient potato growers or as, in his words, “narodets,” which roughly translates to “people unworthy of being called a nation.”

The geopolitical importance of Belarus could not be overstated in the European context. Bordered by EU and NATO countries in the west and Ukraine and Russia in the south and east, it is a missing piece on the chessboard of European democratic states. Neighboring EU and NATO members Latvia, Lithuania, and Poland would particularly like to see Belarus integrate into the European community and thus reduce the perceived security threat from the long-planned Russian-Belarusian integration. Russian plans to build the Astravets Nuclear Power Plant on the border of Belarus and Lithuania, which is a security concern to a region that experienced the fallout from Chernobyl.

In today’s geopolitical and pandemic context, Washington’s interest in Belarus may appear limited at best. Americans are preoccupied with the coronavirus, the economic downturn, and the divisive run-up to November presidential elections. America’s turn towards a more isolationist international policy precedes President Donald Trump and goes back to President Barack Obama after the fatigue of long and unsuccessful wars in the Middle East.  Yet President Donald Trump’s administration should not shed too easily America’s role as the global torch-carrier of freedom.

Belarus will be another test case for America. People will look to see whether the United States still supports the spread of freedom and democracy across the world. Statements such as from Secretary of State Mike Pompeo’s peppered with well-worn words such as “concern,” “regret,” “urge” and “condemn” will not suffice. Additionally, Brussels should play an outsize role in supporting Belarusian society because anything less would highlight the EU’s failure to develop a foreign policy voice even on its own continent. The newly emergent pro-democracy civil society will struggle to survive the crossfire from Lukashenko and Putin and will be facing an uphill battle for years if not decades to transform the country.

Trump, together with allies in Europe, needs to develop a comprehensive and carefully calibrated agenda to support Belarusian civic society and to thwart Putin’s potential military involvement before Belarus risks becoming a flashpoint of conflict or Russia’s geopolitical ambitions. Democratic presidential candidate Joe Biden’s campaign also needs to develop a plan for Belarus. Minsk’s path stands to be quite different from that of Ukraine with the Belarusian population not seeking EU or NATO membership and still favoring ties with Russia—something that Washington and Brussels should understand clearly in their engagement.

Nonetheless, the Belarusians will look to democratic societies for support and inspiration rather than Moscow or Beijing.  Although China’s Development Bank promised Belarus a $500 million loan at the end of 2019, Chinese President Xi Jinping’s decision to be the first to congratulate Lukashenko on his newest “victory” in the polls will have tainted China’s diplomacy among Belarusians.

The Trump administration needs to establish a dialogue with the Belarusian opposition and civil society groups within and outside Belarus. It should consult with Poland, Ukraine, and Lithuania, which benefit from strong government and people-to-people ties with Belarus. In Vilnius, there is a large Belarusian diaspora, opposition representatives led by Mrs. Tikhanovskaya, the exiled Belarusian university EHU, and leading experts on Belarus. The U.S. and EU governments should partner with those businesses that find Belarus an appealing investment destination, especially in the areas of information technology, manufacturing, and science. Elon Musk has already offered to help keep the Belarusian people connected with the outside world in times of political internet disruption and could test in Belarus some of his constellation of satellites, known as Starlink, which could potentially provide internet anywhere on earth.

When the Belarusian people join hands with the Lithuanians across their border on Sunday, it will be the anniversary date of the Molotov-Ribbentrop Pact of nonaggression, which was forged by Adolph Hitler and Joseph Stalin in an effort to divide Europe. Washington and the European capitals should offer their support too. The people of the last dictatorship in Europe will embark on the most difficult task of their generation to transform an authoritarian state-capitalism system into a democratic market economy in an increasingly ambivalent and isolationist world. The parents of this Belarusian generation failed to take this path thirty years ago and their grandparents could not even consider it behind the Iron Curtain and in the aftermath of World War II. Today the Belarusians are ready. But is Washington ready?

Dr. Agnia Grigas, Senior Fellow at the Atlantic Council is the author of Beyond Crimea: The New Russian Empire and The New Geopolitics of Natural Gas.