How America Can Win Iran's Trust 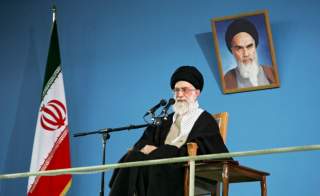 Several days after Iran and P5+1–the five permanent members of the United Nations Security Council plus Germany–announced that they had reached an agreement on the political framework for a comprehensive nuclear agreement; Iran’s Supreme Leader Ayatollah Ali Khamenei finally broke his silence.

Speaking on April 9, Khamenei expressed his typical lack of trust in the United States and skepticism toward the nuclear negotiations. He emphasized that his skepticism is not an illusion, but rather that history has taught him that American leaders deceive, lie, and break their promises.

But Khamenei also expressed his strong support for the nuclear negotiations, and called for finalizing the agreement. He said that he sees the negotiations as bargaining between two equal sides, not as one in which the U.S. dictates its wishes to Iran. Khamenei has allowed the Hassan Rouhani administration to make major concessions to the West, and in his speech he demanded that economic sanctions be lifted as soon as the final agreement is signed.

He said, “If the sanctions can be imposed under other conditions, then why do we even negotiate? Why do we even sit around the negotiations table and argue and debate? We do this because we want the sanctions to be terminated.” Khamenei also said that he will support any agreement that protects Iran’s national interests and dignity, and does not humiliate the Iranian people.

Regime Change as the U.S. Goal

If Khamenei is skeptical about the nuclear negotiations, re-establishing relations with the United States is clearly unjustified to him. In nearly every speech over the last 26 years he has mentioned America’s desire for regime change in Iran. To him, the accusations that Iran has pursued nuclear weapons, violates human rights, and supports terrorism represent only “excuses” for toppling his regime. Khamenei has said that the United States has imposed crippling economic sanctions against Iran in order to provoke the Iranian people to revolt against his regime. Thus, he has always believed that even if the nuclear issue is resolved diplomatically, the United States will find another excuse for regime change in Iran.

Khamenei recalls that the George W. Bush administration rejected the comprehensive proposal by former reformist President Mohammad Khatami in May 2003. That proposal would have limited Iran’s uranium enrichment program to only 3,000 centrifuges. But, the Bush administration, “drunk” with it seemingly “quick” victory in Iraq, was thinking about attacking Iran. Some were saying, “Everyone wants to go to Baghdad; real men will go to Tehran.” Dick Cheney declared that, “We do not negotiate with evil, we defeat them.” The Bush administration did not even rule out attacking Iran with nuclear weapons. The fact is, Washington hawks’ real desire is to change the Iranian regime by force, and a diplomatic deal on Iran’s nuclear program makes that less likely.

Khamenei has reminded President Obama the same in a letter to him. In a speech on April 19 Khamenei repeated that due to Islamic commitments Iran does not and will not pursue nuclear weapons. Nonetheless, the Obama administration still says that the military option is on the table, and U.S. senators threaten Iran with military attacks, while at the same time the United States wants Iran to be defenseless. Khamenei declared that this dual approach is “stupid,” and that Iran is not the aggressor, nor is it a threat against any nation, “close or far.”

The Key to Relations with the United States

But, his most recent speech contained a little noticed, but very important point. Khamenei is looking at the nuclear negotiations as a new experience, one that if it results in desirable results, it can lead to negotiations between Iran and the United States regarding other important bilateral issues. In his speech Khamenei declared:

Now, this [nuclear negotiations] is a new experience. If the other side [the United States] sets aside its bad behavior, this will become a new experience for us, one that will tell us that, well, we can also negotiate with them about other issues. But, if they repeat the same behavior and take the wrong path, it [the negotiations] will only reinforce our past experience.

This statement is critical. Just as Obamacare will be the most important domestic legacy of the president, re-establishing relations with Iran (and resolving the nuclear issue) will be his most important foreign policy accomplishment. President Obama should pursue this goal. Iran’s reformists, moderates, and the Green Movement led by former presidents Akbar Hashemi Rafsanjani Mohammad Khatami, and President Rouhani are also pursuing the same goal. But, to succeed, the United States needs Khamenei’s support.

To gain Khamenei’s support and change his negative view of the United States, a dignified nuclear agreement that quickly terminates the economic sanctions against Iran is essential. In his speech, Khamenei expressed the same views and conditions, and gave a green light for further negotiations. The nuclear negotiations between Iran and the United States have many enemies, including Israel and Saudi Arabia, which are doing everything they can to scuttle the agreement. Attacking Yemen, for example, is part of Saudi Arabia’s effort to scuttle the agreement.

If President Obama really wants a historic achievement in foreign policy, Khamenei has given his green light for it. A dignified nuclear agreement with Iran will become a starting point for re-establishing the relations between the two nations. If the president and Khamenei can overcome the domestic opposition in both countries, then Iran and the United States will be able to become strong allies and resolve the critical issues of the Middle East in a way that will serve the national interests of both countries. Khamenei’s speech on April 19 was very conciliatory. He emphasized that Iran’s military posture is defensive, calling the purported Iran’s attempt to make nuclear weapons a “myth.”

If the nuclear agreement guarantees that Iran will never have nuclear weapons, there will be no excuse for America’s crippling sanctions against Iran that have hurt only ordinary Iranians. Removing the shadow of war and terminating the economic sanctions will be in the interest of the Middle East, as well as the world, and will help Iran to make a peaceful transition to a democratic state that respects human rights and dignity.

There are a number of other reasons why the Obama administration should not fear cancelling its sanctions against Iran.

First, the U.S. will be able to re-impose the sanctions. Thus, the U.S. will have nothing to lose. On April 17 the President said, “How sanctions are lessened, how we snap back sanctions if there's a violation, there are a lot of different mechanisms and ways to do that.” The task, in his view “is to sometimes find formulas that get to our main concerns while allowing the other side to make a presentation to their body politic that is more acceptable,” and the sanctions issue "will require some creative negotiations by John Kerry and others."

Second, the U.S. can test Khamenei’s sincerity in giving a green light for further negotiations about other issues of mutual interest. If the strategic interests of the U.S. are served by having relations with Iran, it is worth taking the risk, even though House Speaker John Boehner hopes that there will not be any deal with Iran, and Republican candidates for the presidential elections are opposed to a nuclear deal with Iran.

Third, Iran’s moderate and reformist groups support re-establishing relations with the United States. The United States should not lose such highly valuable support, as these groups represent the vast majority of the Iranian people and want democracy, not war. As Admiral Michael Mullen (Ret), the former Chairman of Joint Chiefs of Staff, put it, “If [the nuclear negotiations are] successful, it portends historic opportunities for change, not only in Iran but in the Middle East as a whole.”

Finally, the Rouhani administration and its diplomacy have been very successful in presenting a moderate, reasonable and rational image of Iran. They have also made significant concessions regarding Iran’s nuclear program. Thus, if the negotiations fail, the U.S. will be blamed for it. Former Secretary of State James Baker put it this way, “If the U.S. is viewed as cratering the deal because of insufficient domestic support, it will be much easier for our P5+1 partners to diminish or drop sanctions against Iran. We should recognize that some of those countries are eager to resume their business relations there, just as Russia has actually done in recent days by agreeing to the sale of a sophisticated air-defense system to Iran.”