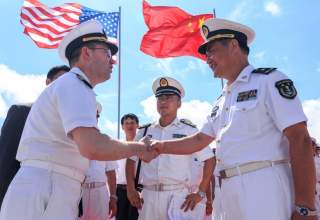 The future of the global maritime commons and the Asian balance of power is at stake in the South China Sea. It’s valuable real estate: half of the world’s commercial shipping and $5 trillion of goods passes through it, connecting the world’s fastest growing economies. Beyond the economic and strategic value of the South China Sea, the matter of how China reacts to international law offers insight into what kind of a rising power China is, and what kind of norms it hopes to shape for the region around it.

In his new book The Pivot: The Future of American Statecraft in Asia, former Assistant Secretary of State Kurt Campbell presents a stark choice for Asia, largely shaped by great power competition between the United States and China. Campbell sees China as the determining factor: will its leaders end up adopting twenty-first-century rules and norms, or will they overtly push for a return to nineteenth-century spheres of influence?

The Permanent Court of Arbitration’s South China Sea ruling came and went mostly as expected, overwhelmingly favoring Philippine claims and ruling against China’s sweeping nine-dash line and “historical rights.” While many pundits have belabored the South China Sea dispute as the litmus test for the United States’s ability to preserve the status quo balance of power in Asia, this echo chamber has muddied the waters and distracted from the larger picture. The South China Sea case was just the first manifestation in a wider contest over international law, values and the future of the global order taking place in Asia.

The headline-grabbing decision by the Permanent Court of Arbitration is about more than rocks and low-tide elevations (LTEs); and it is not, for that matter, about sovereignty, as Chinese commentators have insisted.

Rather, the Philippines, in a deft nod to the nuance of international law, petitioned the International Tribunal for the Law of the Sea to determine whether certain rocks, reefs, and LTEs were entitled to the legal definition of islands, and 200 nautical mile exclusive economic zones (EEZs.)

The court rejected China’s definition of its manmade maritime bases as islands, and nullified its vague claim to the territories within the nine-dash line in which Beijing expresses so-called “historic rights” to fishing grounds far south of its mainland. The ruling also deemed China’s harassment of Philippine and Vietnamese fishermen within those waters as contrary to the UN Convention on the Law of the Sea (UNCLOS.)

We have already seen China thumb its nose at the decision of the UNCLOS tribunal; lean heavily on the Association of Southeast Asian Nations (ASEAN) to drive a wedge in the multilateral institution’s ability to issue protesting statements against Chinese behavior; and ply weaker neighbors with economic enticements to get its way. These are not indicators that Beijing will readily adhere to existing international legal norms.

The current tension will test the durability and flexibility of international law, and of China’s willingness to accept the status quo or whether it will seek to revise the current international order. As Sen. Ben Cardin noted recently in Foreign Policy, “Today is a day for nations to choose between continuing to build a world of rules, law, and order, or a return to a world of growing volatility add great power politics.”

Alongside competition for resources such as fisheries and hydrocarbon reserves and control of strategic chokepoints such as the Strait of Malacca (currently jointly patrolled by Singapore, Malaysia and Indonesia), China and the United States are locked in competition for influence. The two espouse vastly different political systems, values, and worldviews, and these manifest in U.S. preoccupations with Myanmar’s “opening” to democracy on China’s border, Thailand’s turn toward China since its 2014 coup, and the foreign-policy alignment of traditionally neutral countries such as Indonesia and India.

Great power competition also obtains in U.S. support for the Trans-Pacific Partnership free trade deal and its not-so-subtle opposition to the Regional Comprehensive Economic Partnership (RCEP) backed by China. With these competing visions, Beijing and Washington are seeking to write the “rules of the road” for twenty-first-century global trade architecture. Their conflicting ambitions present divergent possibilities for the region’s future, and reconciling these vastly different worldviews remains a challenge for the next generation of Asia hands. Nor will they be easy to retrench, since the governments of China, the United States and the Philippines have staked a high degree of national credibility on claims to national interests in this arena.

China realizes that nationalism is a powerful, unwieldy force, and one that could backfire on the party if it is not careful to manage citizen calls for military action to defend Chinese sovereignty against foreign “aggressors.” As an astute China observer noted in Foreign Policy, “Beijing continues to view threats to the country as originating more from within than from without.”

Pompous and bombastic statements from hawkish voices have been made by those on both sides. PLA-Navy Admiral Wu Shengli warned that “a minor incident. . . could spark war,” and U.S. Admiral Harry Harris has urged Washington to confront Beijing’s “great wall of sand.” However, there are opportunities for constructive dialogue.

China has signaled it is open to dialogue. China’s ambassador to the United States, Cui Tiankai, told an audience at the Center for Strategic and International Studies on the afternoon of the tribunal ruling, “China remains committed to negotiations and consultations with other parties. This position has never changed and will not change.”

For the United States, it will be crucial to vocalize a broader regional strategy that aims to disabuse Chinese perceptions of a containment strategy, while moving beyond the South China Sea security dilemma. Senior National Security Council Director for Asia Daniel Kritenbrink recently told an audience at the Center for Strategic and International Studies: “We have an Asia strategy that includes the South China Sea, and not vice versa.”

Looking beyond the recent arbitration against Beijing’s claims, the United States would do well to engage China’s leadership directly with frank high-level talks while pursuing an open regional dialogue with partners in ASEAN.

Ultimately, it will be important for the two great powers to move beyond the South China Sea issue and deescalate tensions in the wake of the tribunal’s ruling. Both sides should seek to return to safe and predictable behavior. The jointly-signed 2014 Code for Unplanned Encounters at Sea (CUES) forms a good basis for mutually reinforcing responsible actions in this sphere. Beijing and Washington should also resume their long ongoing talks on a bilateral investment treaty (BIT.)

China will likely aim to check more extreme nationalist impulses ahead of the G20 summit it will host in Hangzhou in September (indeed, it has already censored a spike in online messages calling for armed conflict following the South China Sea ruling.) The upcoming summit provides an important window of opportunity to pursue frank and constructive dialogue at the senior-most level.

The balance of power in East Asia hinges on great power cooperation on a variety of international issues, from climate change to international piracy and poverty alleviation. Indeed, as Chinese Admiral Wu Shengli told Xinhua, cooperation is “the only correct option.” It would be a pity if the South China Sea became the impasse preventing continued Sino-American entente and regional stability, which benefits all countries.

Hunter Marston is a contributing member to the Young Professionals in International Affairs Asia Pacific Subcommittee and publishes frequently on Southeast Asia and international affairs. You can follow him on Twitter at @hmarston4.