How America Could Accidentally Push Russia into a Nuclear War 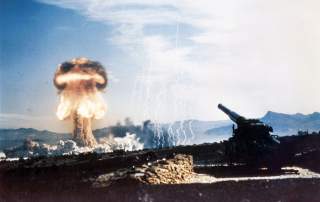 The Trump administration’s Nuclear Posture Review calls for expanding nuclear options to include low-yield nuclear weapons. While there may be any number of good reasons for these force-structure adjustments, the proximate cause appears to be a desire to deter the Russian government from what many in Washington believe to be a lowered nuclear threshold. This line of thinking runs the risk of misunderstanding the context within which the Russian government would use nuclear weapons and likely overestimates our ability to signal anything meaningful to the Russians in a scenario where Moscow is deliberating nuclear first use. Threatening the use of nuclear weapons to deter the Russian use of smaller-yield nuclear weapons will, in all likelihood, be ineffective.

United States and Western commentary on Russian nuclear doctrine often focuses on Russia’s intention to use low-yield nuclear weapons in a conventional conflict, raising the stakes for the West. The implication is that Russia has lowered its nuclear threshold. The NPR states that Russia’s belief in the coercive credibility of its lower-yield nuclear weapons is mistaken and that correcting this perception is a strategic imperative. It’s important to first correct some thinking about thresholds.

A threshold can be best understood as a set of conditions that, when met, trigger some sort of action. In the case of Russian nuclear thresholds, the conditions most frequently cited are when the Russian Federation is facing an existential threat to the state, including a threat from an overwhelming conventional force. The Russian leadership, according to a reading of its published official documents, hasn’t really lowered or raised the nuclear threshold in recent times. What people are misunderstanding is that policymakers in both Russia and the United States have different notions about the conditions under which a conflict meets the nuclear threshold that the Russian leadership is talking about.

Once on that doorstep the Kremlin will understand U.S. intent in only one way—regime change. The Russian leadership have long believed that the United States seeks to weaken, contain, and eventually bring about regime change in Moscow in favor of one that is more compliant with U.S. national interests. This goes back to NATO’s 1999 intervention in Kosovo, against fervent Russian objection. United States and NATO actions against Serbia convinced Russian policymakers that the United States, in pursuit of its foreign-policy goals, would not take Russian national-security concerns into account.

The supplement of new, smaller-yield nuclear weapons envisaged by the NPR is intended to deter this very behavior. Given Russian intent to use nuclear weapons, the United States could signal that it is also willing to go down this path and use nuclear weapons in a limited way, convincing the Russians that they cannot escalate their way out of the conflict. This completely misinterprets the situation.

Deterrence is about affecting adversary behavior. Remember that the Russians, in this scenario, think they are on the verge of defeat. Signaling or using nuclear weapons may be the only way, from their perspective, that they can survive and get the United States to back down from regime change. It is extremely difficult, if not impossible, to deter someone from an action they believe is critical to their survival. If the United States did decide to use nuclear weapons in response to Russian use, then it would likely fail to deter additional Russian nuclear strikes or convince the Russian government to back down. To borrow some military sarcasm about bad situations, nukes will continue until morale improves, i.e. until the threat of regime change is gone.

None of this is to say that we shouldn’t be hard-nosed and doggedly pursue our own objectives in a conflict with Russia. To achieve those objectives, however, we need to understand our adversary. If the Russian leadership decides to use nuclear weapons in a limited way to gain escalation control, then it is likely doing so as a last measure, reacting from a perception that the Russian state is about to fall. If the United States’ objective in such a conflict is to return to the status quo ante and not regime change, then policymakers and those working this issue need to spend time exploring pathways for convincing the Russian government that the United States is not going down this path. This will prove exceedingly difficult given the Russian leadership’s deeply ingrained threat perceptions about the United States.