How America and Its Indo-Pacific Allies Will Redefine Regional Security 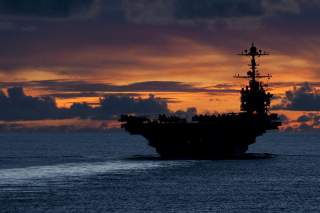 Even before Trump headed off on his Asian grand tour, the shape of things to come started to emerge. The present administration’s foreign policy will place adequate emphasis on Europe and the Middle East, but America won’t be pivoting away from the Asia-Pacific.

Meanwhile, the region presents more challenges than ever. An emerging China is increasingly upsetting the status-quo; North Korea remains as rambunctious as ever, and transnational Islamist terror threats appear ever-present. How the administration manages these problems will go a long way toward determining our status as an Asian power.

A bit of chaos creates opportunity. America has an unprecedented opening to shape the future security architecture of the Indo-Pacific region—and Trump is likely to take advantage of the opportunity.

Too Many Architects, Not Enough Builders

Multinational forums festoon the nations of the Indo-Pacific like umbrellas in a Mary Poppins dance line. The Association of Southeast Asian Nations (ASEAN) includes ten countries. Its East Asia Summit adds the United States, China, Japan, South Korea, Russia, Australia, India and New Zealand. The Beijing-sponsored Shanghai Cooperation Organization consists of eight states, including recently added India and Pakistan. There is also the Asia-Europe Meeting (ASEM), which does not include the United States, and Asia Pacific Economic Cooperation (APEC), which does not include Europe. China’s last Belt and Road forum brought together the heads of twenty-nine states, from the Far East to Western Europe. And, the list goes on.

All these regional organizations and gatherings provide plenty of forums for debate and discussion, but none offers any foundation for building regional peace and security. Something is missing.

No existing regional multinational organization includes every regional player or covers the spectrum of political, economic, environmental and security issues that concern the Indo-Pacific community. More importantly, none can reconcile China’s drive for regional dominance, U.S. presence as an Asian power, European economic power, and a long list of nations who have no interest in being covered by Beijing’s shadow.

An effective security framework might help manage the competing forces that will determine the future of Asia. Building multinational frameworks that can handle such tough tasks, however, is easier said than done.

In times of trouble during the Cold War, the United States tried to erect a series of security frameworks to corral the Soviet Union. Only NATO endured—and for good reason. Michael Doran’s Ike’s Gamble, explains that the U.S.-sponsored Central Treaty Organization imploded because Washington failed to fully understand the interests and goals of players it tried to recruit to the cause. The Southeast Asia Treaty Organization failed for similar reasons. Security architectures are durable only if nations share sufficient interests, a common appreciation of threats, and the ability to sustain these interests over time.

It is premature and presumptive to predict exactly what the framework of Asian security might look like. On the other hand, all the building blocks needed are already there.

Perhaps the safest bet one could make about the future security architecture of the Indo-Pacific region is that it will include America as a regional power. Trump didn’t plan a twelve-day Asian swing because of a yen to travel abroad. Rather, he has undertaken the trip to make clear his personal support for the “pillars of the U.S. presence and explain what they mean in terms of policy.”

For starters, the administration has marked Asia as one of three regions of vital interest to the United States. America can’t afford to see large-scale destabilization in any of these parts of the world. That is key premise in the emerging strategy of the Trump team.

Further, the administration’s view of top threats are remarkably consistent with those of the two previous presidents. All have identified as primary concerns: Russia’s destabilizing influence in Western Europe, Iran’s meddling in the Middle East, managing competition with China in Asia, the danger of war and nuclear proliferation from North Korea, and the danger of transnational Islamist terrorism. The only major change in threat assessment is that the Trump administration rates transnational criminal activity as a higher concern. These criminal networks operate not just in the Western Hemisphere, but in Europe, Africa and Asia.

From the perspective of threats—as well as interests—the Indo-Pacific region will clearly be front and center in American global security strategy. Here are some assumptions that will likely govern the U.S. contribution to an emerging regional security architecture.

In Asia to Stay. This administration thinks that it will be in power for seven more years. Its goal is to apply a consistent, long-term policy toward the region. There will be no effort to contain or isolate China—neither option is possible or desirable in a globalized world. But the United States will be remain present as a powerful force to ameliorate China’s threat as a destabilizing regional influence.

Regional Freedom Caucus. Any regional framework must have a component built around the major democracies: Japan, India, Australia and the United States. Only recently have the world’s two largest democracies—the United States and India—looked more like strategic partners. That development has arisen due to a convergence of interest: concern about China’s drive for regional hegemony. Shared interests are a gravity pulling the great democracies; Democracy is a glue that will help the alignment endure.

While the regional democracies will become a band of brothers, they will likely attract a broader coalition of nations whose political systems share a common commitment to human rights and an interest in regional peace security. This, in turn, will serve to shape other elements of the framework, like the current suite of ASEAN-centric forums, to which Trump is reaffirming American commitment.

Peace through Strength. There will not be an arms race to be won in Asia. The United States currently lacks the military capacity to defend all its global interests in a two-conflict scenario. Trump is committed to fixing that problem. Indeed, many of America’s major friends and allies in the region are looking to strengthen their defensive arsenals. Denuclearization of North Korea remains the objective, but in the meantime, North Korea will face a combination of strategic and conventional deterrence and missile defense that will severely constrain its capacity to make mischief. Over time, China will find its expansion of military influence to be checked and it will discover that its capacity to limit the access that the United States and its allies have to sea lanes or key operational theaters to be significantly challenged.

Over time, the security of architecture of Asia will emerge organically, largely as a matter of consensus among America and its friends and allies. Like the planners who plant grass and put sidewalks where the people walk, the United States will likely let a cooperative structure emerge from the regional players. Still, given what we know of America’s future intent for regional security, some pieces of the future framework would seem to be predictable.

Enter the Quad. Whatever framework emerges will be heavily influenced by a sustained, official quad dialogue—the four discussants being India, Japan, Australia and the United States. The administration has already announced that it will restart this initiative. The four nations reportedly will meet on the sidelines of the East Asia Summit. The four countries are unlikely to drive the conversation alone. This will be a quad “plus” dialogue that will permit other powers to engage and influence the discussion. South Korea, Taiwan, Singapore, Sri Lanka, New Zealand, the Philippines, and Vietnam are some of the countries that will likely move in and out of the discussions.

From the Water’s Edge. Sustaining the capacity to operate in the maritime domain will be central to any effective regional-security architecture. Unlike naval operations of the nineteenth century, when mastery of the seas was all that mattered, operations in the modern maritime domain require the capacity to operate undersea, in space and cyberspace. The framework will integrate all of these and likely start by establishing a common maritime domain awareness picture for all the participants. Efforts will start with confidence-building measures such as joint patrols. Capacity-building initiatives will likely be accelerated as well. Pushing for the production of F-16 jets in India, for example, is the kind of initiative we might see more of.

Global Partnerships. The regional-security architecture of the future will likely have connections that extend beyond the region, because threats like transnational terrorist and criminal networks operate beyond the boundaries of Asia. Further, China’s plans for regional hegemony are partly based on establishing economic dominance through pathways that extend through the Middle East and Europe. Part of the framework will require dialogue and cooperation with key friends and allies in the Middle East and Europe. India’s cooperation with Israel is a good example of the lines of communication and cooperation to come.

Another area of emerging cooperation will involve evaluating Chinese investments that may impinge upon national security. Washington has a process for evaluating foreign investments for these concerns: the Committee on Foreign Investments in the United States. Some other countries, like Australia, have similar mechanisms. In the future, partners in and out of the region will develop similar processes of their own, and they will increasingly share information. This kind of cooperation will typify what grows out of the emerging security architecture.