How America Is Losing the Battle for the South China Sea 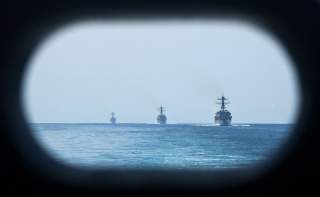 What a difference a year makes. In late summer 2016, there was some hope the July 2016 Permanent Court of Arbitration’s ruling in favor of the Philippine interpretation of the UN Convention on the Law of the Sea regarding the Spratly Islands and Scarborough Shoal would curtail Beijing’s subsequent activity in the South China Sea (despite China’s refusal to even participate in the arbitration case or recognize the court’s jurisdiction, let alone accept the ruling). In fact, some optimists, like Lynn Kuok from the National University of Singapore, have pointed to small developments—such as China this year permitting Filipino and Vietnamese fishing around Scarborough Shoal for the first time since 2012—as encouraging signs that the Hague’s ruling is having a positive effect. But most observers see it much differently, and developments this past summer seem to support a much more pessimistic forecast.

With the U.S. government and the world understandably focused on North Korea and escalating tensions in northeast Asia, China this summer has made substantial progress in further establishing de facto control over most of the South China Sea. Indeed, aside from Secretary Defense Mattis’ strongly-worded speech in June at the annual Shangri-La dialogue in Singapore, and an uptick in U.S. Navy freedom-of-navigation operations in the South China Sea, the administration seems uninterested in reinforcing—let alone more forcefully emphasizing—international law and the longstanding U.S. position that all claimants must take concrete steps in accordance with said law to resolve the disputes peacefully. As Bonnie Glaser from the Center for Strategic and International Studies noted this past July at CSIS’s seventh annual South China Sea conference, the United States seemed surprised and ill-prepared for the Permanent Court of Arbitration’s 2016 ruling, and has yet to devise a comprehensive South China Sea policy or strategy. Freedom-of-navigation operations is simply a policy tool, not a policy in itself.

This isn’t lost on Beijing or the ten Association for Southeast Asian Nation (ASEAN) states. As the diplomatic winds blow harder in China’s favor, Beijing’s next move could very well be a security power play, like declaring maritime base points and strait baselines from the islands and shoals it has occupied and militarized. Or perhaps it could establish an air defense identification zone (ADIZ) over the same area. Furthermore, U.S.-China relations are worsening over North Korea and trade, and, following the Nineteenth Party Congress in late October, Chinese president Xi Jinping may see, from a position of greater domestic strength, both an opportunity and a need to make that very type of play.

What China Got During Its Summer Vacation

China scored two important victories this summer in the South China Sea confrontation, and this barely got any notice in mainstream Western media. First, after a hotly divided politburo debate in Hanoi in July, Vietnam yielded to a Chinese threat of force and suspended drilling in block 136/3, which is licensed to Vietnam’s state oil company, the Spanish firm Repsol S.A., and the Mubadala Development Company in the United Arab Emirates. China had first tried to pressure the Spanish government, as Repsol S.A. provided the drilling vessel and started the onsite project in June. When that didn’t work, Chinese Gen. Fan Changlong, deputy chair of China’s Central Military Commission, explicitly threatened force if Vietnam did not cease the project (block 136/3 is inside China’s South China Sea maritime rights claim, or the Nine-Dash Line) while on an annual border-exchange visit to Vietnam. Let’s be clear on just what exactly happened: Vietnam began a legal resource extraction operation inside its exclusive economic zone, and China, opposing it on dubious historical and legal grounds (grounds that the Hague’s PCA firmly rejected), threatened war if they didn’t cease the project. Beijing didn’t threaten to take Vietnam to court in the Hague, or raise the matter before the United Nations in another forum, or try to apply greater diplomatic and economic pressure. The Chinese government instead threatened military action. And Vietnam took the threat seriously and complied. And the United States and the rest of the world essentially registered no serious rebuke.

Second, China hit the trifecta at the ASEAN foreign ministerial in Manila on August 8. As expected, all ten ASEAN nations and China signed a framework for an eventual South China Sea code of conduct. For those not paying attention at home, this might sound like meaningful diplomatic progress. It was not. Instead, it was a completely vacuous exercise because it no more than restated principles all had agreed to fifteen years earlier, and China still refuses to enter into a binding code of conduct. Just to get to a framework for a nonbinding code took well over a year, so long one has to wonder whether the whole effort amounted to little more than a charade.

Vietnam at least lobbied hard for more forceful language in the post-ministerial joint statement, and after much wrangling it was agreed that language expressing concern about “reclamation” and “militarization” in the South China Sea be added. Then, in a breathtaking breach of protocol, the Philippines’ foreign secretary, Alan Peter Cayetano, told the press he agreed with China’s criticism of the joint statement, which included a bold-faced canard that China hasn’t engaged in reclamation since 2015. Cayetano trashed the ASEAN joint statement as if ASEAN were some nascent assembly of nations unnecessarily picking a fight with China, and not the fifty-year-old prestigious, diplomatic and economic grouping currently chaired by the Philippines. As one of China’s long-standing strategic goals is to divide ASEAN and deal with each SCS claimant bilaterally, this certainly saw champagne corks popping in the Chinese Foreign Ministry. Not quite the coup de grace, perhaps, but a powerful blow to ASEAN unity.

Finally, during and after the ASEAN ministerial in Manila, U.S. Secretary of State Rex Tillerson seemed to be focused on everything but the South China Sea, in marked contrast to not only Mattis’ June speech but also to Tillerson’s own statement on the South China Sea at the ASEAN summit in May. Tillerson instead praised China’s foreign minister after China joined in a unanimous UN Security Council vote to enact more sanctions on North Korea following that regime’s late July ballistic-missile test. This is understandable, of course, but even implicitly signaling to Beijing that the U.S. position on the South China Sea, Taiwan or any other issue is a potential bargaining chip for China’s cooperation on North Korea is a major win for China. China likely believes denuclearizing North Korea through economic and diplomatic pressure without causing state collapse is all but impossible, but if it can advance its interests elsewhere by giving the United States the impression that it is ready to finally take North Korea to task, all the better. The United States would be wise to steer clear of this quid pro quo trap. Instead, it should insist China meet unconditionally its international security responsibilities as a permanent member of the UN Security Council.

Following China’s recent South China Sea victories, the table is now set for an even bolder move to further cement Beijing’s de facto control of its expansive Nine-Dash Line claim. This could come in many forms, such as declaring an ADIZ or maritime base points from various occupied islands and shoals, as mentioned above, or by simply beginning routine military operations from its occupied reefs. The U.S. Navy has increased its South China Sea patrols (on pace for nine hundred days in 2017, up from seven hundred in 2016), and its freedom-of-navigation operations near Chinese-claimed and occupied territory. And, Vietnam sent its defense minister to Washington in August and subsequently agreed to host a U.S. aircraft carrier on a port visit. But neither will deter China from pressing forward more aggressively in the South China Sea this winter and into 2018.

China is getting much more comfortable challenging the U.S. Navy. Each year the Chinese Navy grows in size, capability, and proficiency. U.S. freedom-of-navigation operations are simply going to become a lot more risky in the future, to the point where the potential cost to continue them may outweigh the benefit. As for Vietnam, China knows Hanoi remains ambivalent about getting too close to the United States and will prefer to hedge its relationship, considering its proximity to China and its close defense relationship with Russia. Unlike with the Philippines, the United States has no formal security relationship with Vietnam. Pulling the Philippines even partly out of the U.S. orbit is far more valuable to China than a few more U.S. Navy port visits is to Vietnam.

Threatening war with China over the South China Sea is not credible. But that does not mean the United States should not step up its efforts to make China pay a more serious price for such a flagrant disrespect for international law. As Ely Ratner so thoughtfully pointed out recently in Foreign Affairs, the United States has yet to employ many tools in this regard, and its lack of a comprehensive policy underscores how confused and inconsistent its approach has been over the past decade or so. In many ways, the South China Sea is no less a supreme test of U.S. leadership than the Korea crisis. Trade disputes come and go, given the ephemeral and complex nature of global economics. Giving up on the South China Sea will cast a much longer shadow on the viability and credibility of international law.