How America Picks Its Next Move in the South China Sea 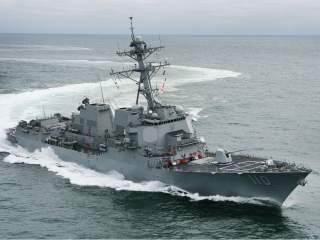 On May 10, 2016, the USS William P. Lawrence conducted the United States’ third recent South China Sea freedom of navigation operation (FONOP). Many in Washington had been expecting a FONOP for several weeks, because the last FONOP was over three months ago and a defense official previously committed to conduct two such operations per quarter. Reports suggested that a FONOP was rescheduled last month for unknown reasons, so an operation appeared overdue.

Nevertheless, the FONOP surprised many observers by targeting Fiery Cross Reef. Both of the previous FONOPs were conducted as innocent passages because they were directed against features that are entitled to territorial seas under the United Nations Convention on the Law of the Sea (UNCLOS). The first FONOP was conducted near Subi Reef, which is below water at high tide, but is within twelve nautical miles of a feature that by its proximity provides Subi Reef with a territorial sea. The second FONOP was carried out near Triton Island, which is above water at high-tide and therefore merits its own territorial sea. As a result, U.S. Navy vessels had to transit “innocently” through these features’ territorial seas without maneuvering or conducting military operations.

The recent Fiery Cross Reef FONOP was similar to these two previous operations, in that the William P. Lawrence transited under innocent passage within twelve nautical miles of the reef. Fiery Cross Reef is claimed by China, Taiwan, Vietnam and the Philippines, and this operation challenged attempts by China, Taiwan and Vietnam to require prior permission or notification of transits through territorial seas. In response, China reportedly dispatched two J-11 fighter jets and a Y-8 warning aircraft, as well as a destroyer and two frigates.

Some experts looking for a stronger signal of U.S. resolve in the South China Sea had hoped that after the first two FONOPs, Washington would target Mischief Reef to show that the United States will not treat low-tide elevations as rocks or islands simply because China has created land on top of them. Mischief Reef is believed to be a low-tide elevation, meaning that it merits only a five-hundred-meter safety zone, rather than a twelve-nautical-mile territorial sea. Although China has created over five million square meters of land to house an airfield and port on Mischief Reef, UNCLOS clearly states that islands and rocks must be “naturally formed.” Thus, the United States is legally entitled to conduct normal military operations within twelve nautical miles of Mischief Reef, which would signal that the United States will not alter its operations in response to Chinese land reclamation.

This leads to an important question for experts trying to understand U.S. decisionmaking: why did officials in Washington choose Fiery Cross Reef rather than Mischief Reef? There are two primary hypotheses, both of which could explain why the administration has once again eschewed such an operation.

First, some experts have argued that the White House is simply risk-averse, and determined to avoid any potential crisis with China in President Obama’s last year in office. These critics suggest that the White House sees innocent passages as less escalatory and has therefore avoided Mischief Reef, which would require the U.S. ship to conduct military operations during its transit near the reef. Since the administration had already challenged Subi Reef, which houses one of the three new airfields in the Spratly Islands, operating near Fiery Cross Reef (home to another airfield) was the logical next option if Mischief Reef (site of the third airfield) was ruled out.

Alternatively, the White House may be waiting to operate within twelve nautical miles of Mischief Reef until the Arbitral Tribunal issues its decision in the case the Philippines has brought against China. The tribunal may rule that Mischief Reef is a low-tide elevation, rather than an island or a rock. This would make it more difficult for China to claim that a U.S. FONOP that includes the conduct of a military activity near Mischief Reef is provocative. Therefore, some U.S. leaders may believe that delaying a Mischief Reef FONOP until the legal case is resolved ensures that Washington is on the right side of international law, and gives the United States an opportunity to reinforce the tribunal’s decision.

It would make logical sense for the administration to wait until after the ruling to conduct a Mischief Reef FONOP, as long as the White House can avoid the perception that it is unwilling to accept risk to uphold the prevailing order. It is critical that the United States continue to follow through on its promise to conduct routine FONOPs so that the individual operations do not become political footballs. Just like surveillance operations in international waters and airspace, the United States would be better off if these operations were seen not as major political decisions but minor operational details. Regular U.S. patrols are also vital because if Washington doesn’t challenge China’s illegal claims, it is hard to imagine smaller states doing so.

China will criticize the United States regardless of the details of the operation. After the May 10 operation, for example, China’s Foreign Ministry spokesperson said that the FONOP “threatened China’s sovereignty and security interests, endangered the staff and facilities on the reef, and damaged regional peace and stability.” The Ministry of National Defense called it “gravely provocative” and accused the United States of “sabotaging peace and stability.” This type of response is to be expected, but it is a small cost to pay for upholding the rules and norms that undergird the international order.