How America and Russia Could Start a Nuclear War 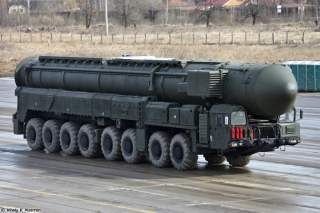 A few weeks ago, I directed Harvard Extension School’s “Crisis Game,” in which students had to play out a hypothetical Cold War crisis involving nuclear weapons. The realization that a crisis could escalate to nuclear war shocked younger students who had never given much thought to this issue, especially when they found the game sliding from an exercise in negotiation toward nuclear doom. (“I was literally sweating,” one of the players later said.)

But is a nuclear war between Russia and America possible today? After all, there is no longer a Cold War, the Soviet Union and its military alliance were dismantled long ago, and both Russia and America have slashed their nuclear inventories. What could cause a nuclear conflict? How would such an exchange start, and how would it progress?

Unfortunately, nuclear war is still possible. Now, as during the Cold War, the keys to a strategic nuclear exchange are rigid military planning, political misperception, and natural human frailty.

Part of the problem is that Russia now openly considers the use of nuclear weapons in any scenario in which they begin to lose to a superior force. In an ironic reversal of the situation during the Cold War, NATO is now the dominant conventional coalition in Europe, while Russia is a weak state with a large but less powerful army. The Russian Federation has no significant ability to project power far from its borders, and likely cannot sustain a major conventional engagement with a capable opponent for any prolonged period.

As a result of this imbalance, the Kremlin has embraced a doctrine of “de-escalation” in which Russia would threaten to use nuclear weapons during a conflict in order to deter an opponent from pursuing further military gains. (While China maintains a public pledge never to be the first to use nuclear arms, Beijing likely has a similar plan should war with the Americans go badly.)

How might this doctrine come into play during a crisis? There is far less at stake between Russia and the West now, and the Russians are not commanding a global empire dedicated to a revolutionary ideology. That does not mean, however, that Russian leaders, including President Vladimir Putin, accept the outcome of the Cold War.

And so imagine, in the wake of Russia’s successes in Ukraine, that the Russian leadership under Vladimir Putin decides to test its belief that NATO, as a political alliance, can be broken with a show of force. To this end, the Kremlin attempts to replicate the 2014 Ukraine operation, only this time in a NATO nation, perhaps in the Baltics or Poland. “Little green men” begin assisting “separatists” in isolating a slice of NATO territory.

This time, however, the target responds forcefully: instead of the hapless and disorganized Ukrainians of 2014, the Russians find themselves facing troops with better training and superior Western weapons, who briskly dispatch the Russian “volunteers” and showcase an array of captured Russian arms.

(Recommended: 5 Most Lethal U.S. Weapons of War Ever)

The Kremlin, now watching its plans unspool, doubles down. Clinging to the assumption that NATO will fracture and abandon the victim to Russian aggression, the men in Moscow send in Russian regulars to help their “brothers” in the struggle. NATO leaders, contrary to these unrealistic Russian expectations, activate Article V of the NATO charter. Now it’s a real war, and after they clear the skies of inferior Russian aircraft, Western jets soon begin pounding Russian soldiers and obliterating Russian equipment in numbers that defy even the most pessimistic assumptions of the Russian General Staff.

Russian losses, viewed instantly and globally across the internet, are heavy. The Russians soon realize they face the prospect of a humiliating defeat. Worse, they may fear a counter-offensive that could spill into Russian territory. The idea of NATO stepping even an inch into Russia fills the generals and their president with dread, especially as the Russian public watches their soldiers being cut to pieces in a foreign country.

The Kremlin, at this point, threatens to use nuclear weapons. The West responds by reiterating its demands that the Russians leave NATO territory, by initiating a renewed offensive against the invading forces, and by increasing U.S., British, and French nuclear readiness.

What happens next is too hard to predict in political terms. If the Russians pull back and borders are restored, the crisis is over. If, on the other hand, they decide to go all in on what was supposed to be a bluff, they might launch a limited number of tactical nuclear strikes against NATO targets, such as a small number of airfields or command posts, in order to “de-escalate” the situation. (If all of this sounds crazy, remember that this is exactly the scenario the Russians exercised in 1999—while the far more pro-American Russian President Boris Yeltsin was still in power—and have repeatedly practiced since.)

As the world reels from the news that nuclear weapons have been detonated in Europe, the Kremlin then issues a warning: everything stops right here, right now, with all forces left in place. Or else.

Before the ink dries on the Russian demand, NATO’s response is quick, calibrated, and forceful. A few symbolic targets are chosen: a Russian naval formation in the Black Sea or in the Baltic are destroyed with submarine-launched nuclear weapons. Russian territory is not breached (Yet.) All Western strategic forces are on full alert, ready to strike the entire Russian nuclear infrastructure, including Moscow. The Russians, likewise, are ready to strike hundreds of North American ICBM sites, along with U.S., British, and French submarine pens and bomber bases.

If the Russians respond with another round of nuclear strikes inside NATO, a combined Anglo-American (or even Anglo-Franco-American) attack on targets inside Russia near the fighting might be the West’s last ditch to convince the Russians to pull away from their failed gambit. Once a nuclear weapon explodes on Russian soil, however, Russian hardliners, civilian and military, will demand a strike on America or Britain, or both, as revenge and as a show of resolve.

If the crisis goes beyond this initial exchange of nuclear force, with hundreds of thousands of people already dead and injured from nuclear strikes in multiple countries, we can expect all sides to execute their Cold War-era plans, since they’re really still the only ones anyone has. Driven by fear and military logic, the United States and Russia will attack each other’s strategic nuclear capability as quickly as possible, including command and control centers located in or near major cities like Washington and Moscow.

Carefully crafted nuclear war plans, with all their elegant, complicated options, will fall apart in the midst of chaos. Even taking into account weapons destroyed by surprise, rendered inactive by flawed orders, or neutralized by some kind of technical malfunction, a combined total of several hundred nuclear weapons will fall on each country, including a fair number on Canada, the United Kingdom and France.

In the United States, much of the eastern seaboard will burn. Even a limited strike will require the immediate destruction of Washington along with Navy nuclear installations from Virginia to Florida. In the west, San Diego and Seattle will suffer the most. Omaha, the home of the U.S. Strategic Command, will be gone, along with missile bases and airfields in the mountain states. Fallout will kill many more to the east of all of these targets, and irradiate large swaths of America’s agricultural heartland.

In the immediate aftermath, governors will take control of their states as best they can until something like a U.S. government can reconstitute itself. National Guardsmen, along with state and local police forces, will be forced to cope with a terrified and gravely wounded population. Soldiers and cops will find themselves doing everything from protecting food stocks to euthanizing doomed burn victims. Along with the grisly human cost, the damage to the fragile, electronically-based U.S. infrastructure will be massive.

Areas that were untouched in the strikes, from Northern New England to the Deep South, will drown under an influx of refugees. Civil disorder will eventually spiral out of the control of even the most dedicated state military organizations and police forces. Martial law will be common and persistent.

In Russia, the situation will be even worse. The full disintegration of the Russian Empire, begun in 1905 and interrupted only by the Soviet aberration, will finally be complete. A second Russian civil war will erupt, and Eurasia, for decades if not longer, will be a patchwork of crippled ethnic states led by strongmen. Some Russian rump state may emerge from the ashes, but it will likely be forever suffocated by a Europe unwilling to forgive so much devastation.

I am not enough of an expert on Chinese strategy to know if this situation would be replicated in the Pacific. I cannot help but wonder, however, if the weak and insecure Chinese state, faced by a stunning conventional loss, might panic and take the nuclear option, hoping to shock America into a cease-fire. The devastation to America might even be worse in this case: in order to achieve maximum effect, the small Chinese strategic nuclear force is almost certainly targeted against American cities, from the West Coast inward. The United States of America, in some form, will survive. The People’s Republic of China, like the Russian Federation, will cease to exist as a political entity.