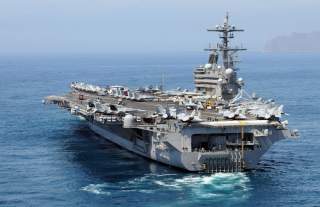 For decades, Chinese leaders have followed Deng Xiaoping’s strategy of “hiding one’s capacities and biding one’s time.”  Since Xi Jinping came to power, however, Chinese policymakers have been employing slogans that suggest the adoption of a more assertive strategy, emphasizing China’s “dream of a strong nation” and the need to “actively strive to accomplish something.”  Nowhere is this new and more active doctrine more apparent, and potentially dangerous, than in the disputed waters of the South China Sea.

Since the end of the Chinese Civil War, Beijing has laid claim to the entire South China Sea, all the way down the coasts of Vietnam and the Philippines to the shores of Borneo 1,700 miles away.  A glance at a Chinese map of the “nine-dash line” delineating Beijing’s claims shows what a vast area this is.  China is not just claiming open water, however.  Over five trillion dollars’ worth of shipping passes through the South China Sea each year, and it is full of productive fishing grounds and potentially vast energy resources that nations might be willing to fight for.  The strategic value and importance of the area is clear.

This is why China’s increasingly provocative actions in the South China Sea are so alarming to its neighbors and to the United States.  The U.S. has called on all parties to the dispute to avoid actions that might exacerbate tensions, but China has continued to use its Navy and Coast Guard vessels, as well as other non-military assets, to harass the vessels of other nations, install oil rigs in disputed waters, and construct artificial island outposts that form what our Pacific Fleet Commander has memorably dubbed the “Great Wall of Sand.”  The remarkable growth in the size and capability of China’s fleet of “white hull” paramilitary vessels—which is now larger than the Coast Guard fleets of Japan, Vietnam, Indonesia, Malaysia and the Philippines, combined—and the striking speed and extent its land reclamation efforts suggest that China is not going to cease its efforts any time soon. Indeed, it seems clear that Beijing is pursuing a deliberate and well-resourced strategy to achieve de facto control, as a precursor to sovereignty, over the South China Sea.

While we wish to avoid becoming embroiled in the region’s multilateral territorial disputes, it is becoming clearer that the People’s Republic of China’s increasingly assertive actions in the South China Sea require the U.S. to develop and articulate a coherent response, backed up by military power.  While the United States welcomes China’s socioeconomic development, we must make clear through words and deeds that the use of force and coercion will be strongly and resolutely opposed.  It is encouraging to see that that the President appears to recognize the seriousness of the situation, and that the Department of Defense is considering military options as part of a broader “whole-of-government” approach.  I believe this is appropriate given China’s own use of its military and paramilitary muscles in pursuit of its objectives, but careful thought must be given to how we employ our military forces to deter and counter China’s activities without escalating the situation further.

(Recommended: Could the Ukraine Crisis Spark a World War?)

The U.S. should make clear its steadfast support for freedom of navigation and the peaceful, multilateral resolution of these disputes by maintaining a continuous naval presence in the region and by sending our ships and aircraft through the international waters and airspace that Beijing is falsely claiming as its own.  Not doing so would send a message that we recognize the artificial islands as sovereign Chinese territory.  To support these continuous efforts, we will likely need to adjust our global naval force posture and deployment patterns, and allocate additional resources to naval forces that are already overtaxed by other missions.  We should also encourage and support others nations in the region that are opposing China’s unilateral actions, while discouraging them from taking any escalatory steps to assert their own claims.  Meanwhile, we should seek to multilateralize the issue still further by encouraging international organizations and states such as Japan that have no claims to the disputed waters to pay it greater attention.  Encouraging ASEAN to develop a united front on the issue, even if only to insist that it be resolved in a court of law, would also go a long way towards demonstrating to China that their coercive behavior will be met with a response.

More broadly, the United States must demonstrate to our friends and allies that we are committed to maintaining a balance of power that will not allow China to dominate the region or unilaterally achieve its aims with force and coercion.  As egregious as China’s island building and paramilitary aggression is, an outright military conflict between China and its neighbors would be far worse.  Thus far, American military superiority has deterred China from crossing that threshold.  Looking ahead, we must sustain that superiority, and the escalation dominance it provides, in the face of China’s rapid military modernization.   Among other capabilities, we will need air and naval forces that can overcome China’s growing anti-access and area-denial systems (A2/AD) and intervene decisively in any case of aggression against the United States’ allies and partners.  The ongoing territorial disputes in the South China Sea are a regional issue with global importance, and continued American leadership and military superiority are required to keep this and other disputes in the Asia-Pacific region from getting out of hand.

Rep. J. Randy Forbes is the Chairman of the House Armed Services Seapower and Projection Forces Subcommittee and Co-Chairman of the Congressional China Caucus.