How America Succeeded in Securing the Palestinian Authority 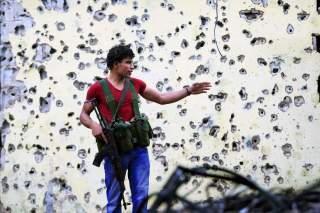 In early January 2006, a U.S. diplomatic cable warned that the Palestinian Authority was having “difficulty asserting its authority in Gaza and the West Bank.” It was being challenged by a plethora of groups, including internal rivalries, Hamas, Palestinian Islamic Jihad, and other militias affiliated with Fatah activists. Washington was worried. Then, in late January, Hamas won the Palestinian legislative elections and took over the Gaza Strip in November 2007. In the end, the Palestinian Authority (PA) survived these threats largely due to U.S. investment in training its security forces.

Today the Palestinian security forces are a pillar of stability in the West Bank and have helped prevent the chaos of the Arab Spring, the rise of Islamic State and other threats. They also coordinate with Israel and Jordan and have helped ensure that—despite the numerous crises between Jerusalem and Ramallah, which is where the PA government institutions are located—relative peace continues. As Israel approaches its seventieth independence celebrations and the U.S. embassy is scheduled to move to Jerusalem, it is prudent to note that the model of the Palestinian security forces is one that the United States has adopted in partnerships with Iraq, Syria, Niger, Afghanistan and elsewhere.

A new study published by the Washington Institute for New East Policy looks at the evolution of the Palestinian Authority Security Forces (PASF) between 1994 and 2018. This is the most comprehensive study to date of these forces. Prior to 2007 these forces were the remnants of various structures the Palestinians had created dating back to Yasser Arafat’s return from Tunisia in the 1990s. During the Second Intifada the Palestinian security forces were mostly disarmed and many of their bases and headquarters were damaged in fighting. As the intifada ended in an Israeli victory, the Palestinians entered an election season.

Holding elections was in line with George W. Bush’s democratization agenda. Iraq and Afghanistan held parliamentary elections under United States and coalition military security in 2005. What quickly became apparent was that democracy without institutions—and specifically without security institutions—would not end the chaos and instability in these countries. Iraq would limp from crisis to crisis until the Islamic State took over a third of the country in 2014. The Palestinian areas almost suffered the same fate. Hamas exploited the elections and won, much as the Muslim Brotherhood won in Egypt in 2012.

Even before the instability unleashed by elections without a security framework in place became apparent, Washington already knew there was a dilemma. Thomas P. M. Barnett published The Pentagon’s New Map: War and Peace in the Twenty-First Century in 2004. He argued that the United States faced a world divided into a “functioning core” and a “non-integrated gap.” In the gap there was instability and this represented a swath of geography across the Sahel in Africa to the Middle East and towards South Asia. The dilemma is how to prevent institutions such as the Palestinian Authority from becoming less stable. If they become less stable and terrorist groups are able to exploit them, then that leads to threats to states around them, such as Jordan and Israel, which in turn threatens the region and can eventually threaten the world, as ISIS did from Syria and Iraq.

The office of the United State Security Coordinate (USSC) was created in March 2005 and has been led by several U.S. generals. Its first commander, Lt. Gen. William “Kip” Ward, was deprived of a real budget. His successor, Lt. Gen. Keith Dayton, helped turn it into a uniquely influential role. “It was then, under Dayton’s leadership, that the USSC appropriated the role, size and, crucially, budget it would take forward into subsequent years,” Zilber and al-Omari note. Since 2007 it has received between $50 and $100 million via the US State Department’s Bureau of International Narcotics and Law Enforcement Affairs. The USSC focused on training Palestinian security forces. Dayton called them the “new men” and said that they “believe that their mission is to build a Palestinian state.”

Zilber and al-Omari note that by 2017 nearly twenty-nine thousand Palestinian personnel had been trained either at a base in Jericho or by transporting men back and forth to Jordan. “US officials often state that the training component of the USSC mission is near completion. Tentative plans, moreover suggest moving all training from Jordan into the West Bank by 2020, a decision that will require a significant Israeli political decision.” Zilber and al-Omari also conclude that “the United States needs to emphasize that security in general and the USSC in particular, must be buffered from the vagaries of the peace process. Washington must, in turn, refrain—and make clear to the parties that they themselves refrain—from using security as a lever in restarting peace talks or influencing their course.”

The larger context of the problem the United States faces in the USSC is one it has faced in Afghanistan, Iraq and elsewhere. Once a local security force becomes dependent on U.S. funding and training it is difficult to wean it off of the partnership. Inevitably this creates a catch-22. The more you train and fund, the more you are needed. If you drawdown then any instability that follows is pinned on the withdrawal.

A related issue is that the Palestinian security forces are part of its broader “military first” or what the Pentagon calls “by, with and through,” strategy to counter terror and instability in the Middle East, Africa, and Asia. As the United States has moved on from democratization frameworks of the early 2000s to partnering with local security forces, it sees these forces as a pillar of policy, but also a goal unto themselves without a clear end. In May 2017 testimony to the House Armed Services Committee Gen. Raymond A. Thomas III, commander of U.S. Special Operations Command said that the current methodology “is more comprehensive than simple counter-terrorism, and is an important part of an overarching whole-of-government approach to advance broader notional security objectives.” He asserted that confronting threats required focusing efforts to “secure and hold our gains by empowering local entities within and among the populations terrorists exploit.” Special forces were deployed in eighty countries he said. The Palestinian Authority is not widely seen as connected to that overall U.S. security policy, but it very much is. The PA security forces were the first major success of the post-9/11 era at moving from civil society and institution building to security first.

The problem now facing the U.S.-trained security forces in the West Bank is that they must balance security cooperation with Israel, a key U.S. ally, with the desires of their Palestinian constituents. “The PASF is often viewed by critics as treasonous ‘collaborators’ or ‘subcontractors for the occupation,’” note Zilber and al-Omari. At the same time the USSC must coordinate with Israel to acquire equipment for the Palestinians. For instance, in November 2008 Dayton met with Israel’s Central Command to ask that the Palestinians be allowed to import helmets for their soldiers. The Israelis said they didn’t mind helmets that would protect against 9 mm rounds but not 5.56 mm rounds, the standard M-16 caliber used by Israel’s forces.

In February two Israeli soldiers drove into Jenin, a PA controlled city in the West Bank, by mistake. Palestinian security forces managed to extricate them. A Palestinian official told The Jerusalem Post that “we intervened because we do not want anyone to die, regardless of their background.” He also noted that his forces were protecting Palestinians by aiding the soldiers because if the soldiers were harmed the Israel Defense Forces would “wreak havoc in Jenin.” This was a sign that despite the tensions between Israel and the PA and the controversy over Washington’s decision to move the embassy to Jerusalem, the security forces were executing their mission effectively.

In the coming months and years the “military first” U.S. security model will be tested in the PA, where it first gained traction. Palestinian political leader Mahmoud Abbas has upped his rhetoric against the Trump administration, calling the U.S. ambassador the “son of a dog.” Abbas also faces a transition crises without a successor and Palestinian elections have been postponed. The peace process seemed stalled forever and reconciliation with Hamas in Gaza was harmed when terrorists tried to assassinate Palestinian prime minister Rami Hamdallah and his intel chief Majed Faraj. Whatever happens, the investment in the security forces has been a successful one so far, buying the Palestinian Authority more than a decade of peace and relative security.