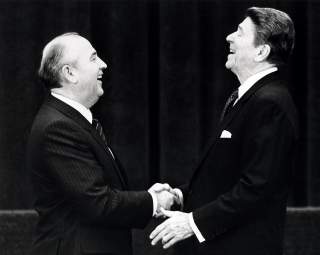 Starting in the mid-1980s, the U.S.-Soviet summits in Geneva (1985), Reykjavik (1986), and Malta (1989) have stood for a special segment of twentieth-century history—the phasing out of the Cold War. These summits helped bring to a close the unremitting competition between irreconcilable worldviews and political systems, which left not a single corner of the world untouched.

Malta was where U.S.-Soviet relations crossed the Rubicon. The Malta summit between Mikhail Gorbachev and George H.W. Bush on storm-tossed seas stood for the end of the global communist project and the Soviet superpower. Today, looking back at the vertiginous history of the 1980s, one can trace the path toward Malta back to Ronald Reagan’s historic address on March 8, 1983, to the National Association of Evangelicals, where Reagan defined the Soviet Union as an “evil empire.” Consciously or not, Reagan was echoing his predecessor, Harry Truman, who in 1949 declared a head-on struggle against the “false philosophy” of communism, whose aims where completely opposite to those of democracy.

Reagan made a significant move on March 23, 1983, when he declared the development of a new kind of weapon capable of protecting American skies from a Soviet missile strike. Such missile defense would render Soviet nuclear capabilities and delivery vehicles useless. The principal aim of the Strategic Defense Initiative, which was known popularly as “Star Wars,” sought to demoralize the Kremlin leadership. Add to this a massive military buildup. While for America, the military expenditures on SDI represented an investment into a technological breakthrough, matters were rather different for Moscow. For the Soviet planned economy, the new arms race was an irrecoverable loss, which overlapped with a dramatic drop in oil prices. In short, Reagan imposed on the elderly Soviet leadership the excessive burden of his Cold War strategy and to a great extent helped the rise of Mikhail Gorbachev (who was the youngest member of the Politburo).

By 1994, Washington’s strategy was unexpectedly proven right, when the head of the Soviet legislative delegation, Gorbachev, revealed during a meeting with British Prime Minister Margaret Thatcher his great zeal for disarmament. The Iron Lady saw potential in Gorbachev, with whom she “could do business together.” Based on this judgment she urged Ronald Reagan to start a dialogue with Gorbachev, and played a crucial role “in prompting Reagan to follow Thatcher’s example.”

Her recommendation helped to forge a positive relationship between Reagan and Gorbachev.” In my view, Reagan skillfully deployed his acting skills during the first meetings in Geneva (November 1985) and in Reykjavik (October 1986) to play the role of an unwavering adherent of SDI, while Gorbachev’s attitude fully confirmed the key significance of this tool for exerting pressure on Moscow.

Indeed, Gorbachev wrote in his memoirs about the quasi-Shakespearean passions in Reykjavik, when “just one step separated us from a triumphal outcome, but the SDI was the stumbling block.”

During this time, the two Anglo-Saxon leaders played the game of “good cop, bad cop.” In this informal “Big Troika” Thatcher was a charming and efficient moderator. Hence the SDI turned out to be the key incentive for Gorbachev’s perestroika or New Thinking policy which called for a “rejection of certain assumptions, which previously seemed unshakable.”

Three months after Geneva meeting, speaking at the 27th Convention of the CPSU Gorbachev stated that “the interests of social development rank above all else,” and defined the ideal of socialism as: “a world in which each people freely chooses its path of development, its way of life.” He also promised, “in the nearest future, to withdraw the Soviet troops stationed in Afghanistan.”

Gorbachev’s book Perestroika and New Thinking (1987) was another significant step toward Malta. His Manifesto of the Cold War declared that “‘all-human values’ had precedence over ‘class values.’” According to Henry Kissinger “this approach, deprived Soviet foreign policy of its rationale” and was “a complete reversal of established Leninist orthodoxy and historical Marxism.”

By recognizing “the right of each people to choose their social system at their own,” “and to have their own foreign policy,” and by claiming that “any interference in internal affairs, any attempts to limit the sovereignty of states are inadmissible” Gorbachev de facto questioned the value of the “Brezhnev Doctrine.” Moreover, by signing the U.S.-Soviet Intermediate-Range Nuclear Forces Treaty, Gorbachev, two years before Malta, jettisoned Communist ideology of the Cold War.

Finally, another key development, which happened in Moscow before Malta, was the 19th All-Union Conference of the Communist Party of the Soviet Union. Its revolutionary outcome was the CPSU’s voluntary surrendering its monopoly on ideology and power by deciding to hold alternative elections for deputies to the supreme body of state power. None of the 4991 delegates of the Conference voted against these five resolutions. That meant that the Communist Party rejected the Communist identity of the Soviet Union, and this fact inevitably led to the political death of the USSR, though some people even today tend to explain the disintegration of the USSR by Gorbachev’s “betrayal” and U.S. “encroachment.”

Reagan’s visit to Moscow in May 1988, has confirmed the historical significance of the 19th Party Conference. Using the Red Square as a podium he declared that the USSR was not the evil empire anymore. The supreme irony of history was that the leader of the West made this end of the Cold War declaration exactly at the same spot where in 1918 the Communist leadership had declared war on the West. In fact, Lenin’s Mausoleum was right behind Reagan as he spoke.

On December 1, exactly one year before the Malta summit, the aforementioned Soviet resolutions acquired the force of law: the Soviet constitution and electoral law were appropriately amended. This was the silent coup, which overthrew the communist legal and political system of the USSR.

On December 7, speaking at the United Nations, Gorbachev stated: “Freedom of choice is a universal principle to which there should be no exceptions.”

On March 26, 1989, for the first time since 1918, when the Constituent Assembly was elected, the USSR had its first free elections. On July 6, 1989, in a speech to the Council of Europe, Gorbachev abandoned “not only the Brezhnev doctrine, stipulating the right of Soviet intervention in Eastern Europe, but the satellite orbit itself, by renouncing ‘spheres of influence.’” Meanwhile, the very existence of socialism in Europe was the only proof of the veracity of Lenin’s theory of Revolution and legitimacy of the Communist rule in the USSR. On November 9, 1989, the Berlin Wall fell, and the history of German and European division was over.

On December 2-3, George W. Bush and Gorbachev held their summit in Malta. However, for President Bush it was not that important: after all, he was just finishing the game his predecessor played. Bush wanted “to find a way to distinguish his policy from Reagan’s.” And he found his man to make the difference. In September 1989, Boris Yeltsin, who had secured the support of more than 90 percent of Muscovites, met the U.S. President.

Only three months were left till elections of People’s Deputies in Russia and other Soviet Republics: fifteen sovereign political nations of the USSR were about to be created. The age of the single-handed rule of Gorbachev in the Soviet Union was coming to an end.

The emergency summit with the forty-first U.S. president was vital for Gorbachev, who was widely expected to be elected President of the USSR in March 1990 without universal suffrage. Malta was supposed to show the West that Gorbachev had no alternative, and television pictures of the summit were presented as the most important development since the 1945 Yalta Conference in order to dissipate doubts of Gorbachev’s friends and foes.

Meanwhile, the leaders of Great Britain, France, and Germany had been lobbying for the Malta Summit, since they badly wanted to preserve the continuity of the U.S. policy toward the USSR. Gorbachev was for them the guarantor of the new political realities in Europe. The Bush administration reaped all the potential benefits from the summit. This was particularly true if one took into account that on December 24, Alexander Yakovlev, a mastermind of perestroika, presented to the Congress of People’s Deputies his report on the Molotov-Ribbentrop Pact. That report showed that Estonia, Latvia, and Lithuania were annexed under provisions of the Pact.

After the Manhattan Project, the SDI was the second most efficient U.S. super-weapon in the twentieth century. However, officially the Cold War ended thirty years ago at Malta, during the first joint press-conference of the U.S. and Soviet leaders. It was here where the history of the post-Soviet states began.