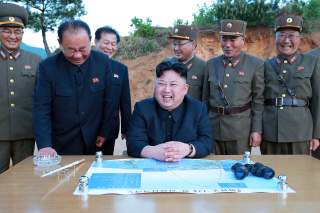 On Friday, North Korea tested its second intercontinental ballistic missile (ICBM) in just three weeks, bringing the regime one critical step closer to its goal of being able to hit the United States with a nuclear weapon. While the North’s rapid progress may tempt some to believe that there is no choice but to recognize Pyongyang as a nuclear power, the real reason the North has come so far is because there are so many holes in the sanctions regime that is supposed to keep it isolated. While the United States has finally moved toward a policy of “maximum pressure,” the deficient efforts of America’s friends and allies play a key role in enabling further progress, such as yesterday’s ICBM test.

For more than a decade, under both George W. Bush and Barack Obama, the United States tolerated and sometimes even contributed directly to the deficiencies of sanctions on Pyongyang. During the Obama years, the euphemism for this do-nothing approach was “strategic patience.” Not surprisingly, this passivity signaled to other countries that there was little need to get tough on North Korea.

Across the globe, glaring examples of lax or negligent enforcement continue to emerge. Earlier this year we learned that Belgian authorities allowed sanctioned North Korean banks access to SWIFT, the secure financial messaging service that is indispensable for transferring money across borders. This helps to explain how North Korean hackers could attempt to steal $1 billion last year from the Bangladesh central bank by using SWIFT. The hackers only made off with $81 million, which is hardly comforting.

In another case, Austria claimed that ski equipment for Kim’s chalet was not a violation of the luxury goods ban that the UN imposed in 2006. As part of its policy of maximum pressure, the Trump administration needs to make it clear to allies that such behavior is intolerable.

Likewise, there are several friends and partners in the Middle East who need a wakeup call from Washington. Earlier today the Associated Press reported that Kuwait, Oman, Qatar and the United Arab Emirates all employ North Korean workers in slave labor conditions. Previous analysis has shown that North Korea receives at least $500 million a year from overseas laborers, with at least 6,000 of the reported 50,000 in the Middle East. Furthermore, the UN clearly stated that North Korea uses the revenue from its slave laborers for its nuclear weapons and missile programs.

Just this week, Congress sent a bill to the president authorizing new sanctions against those who employ North Korean laborers. The AP noted that North Korean laborers had participated in the expansion of Al-Dhofar Air Base in the UAE, which is home to U.S. troops fighting ISIS. In addition, another 1,000 North Koreans are set to arrive shortly. The Trump administration should quietly tell the Emiratis and other Gulf states that it will use the new sanctions law against them unless they send the North Koreans home.

In Asia, Singapore is among the U.S. partners complicit in sanctions evasion. Last week, NK News reported that a Singaporean company has ties to North Korea’s leadership and serves as a conduit for providing luxury goods to keep the elites happy. This is not Singapore’s first foray into North Korea sanctions evasion; two years ago, Singapore’s Chinpo Shipping was charged with facilitating a North Korean arms shipment as well as helping to process over $40 million in illicit financial transactions through the U.S. financial system.

Of course, putting pressure on friends doesn’t mean letting adversaries off the hook. There’s no question that China is the worst offender when it comes to undermining sanctions and Russia is an increasing source of concern.

We’ve recently learned that Chinese banks processed at least $2.2 billion in transactions through the U.S. financial system on behalf of North Korea. But the clearest evidence of Beijing’s complicity is that North Korea’s ICBMs are transported on trucks made in China.

Despite frequent caricatures of North Korea as an isolated Hermit Kingdom, Kim Jong-un depends on globe-spanning illicit networks to provide the foreign parts that keep his missiles working, the luxury goods to keep his elites happy and the revenue to sustain the illusion of prosperity in Pyongyang. The Trump administration has the tools to squeeze North Korea, but the time to use them is running out.

Anthony Ruggiero, a Senior Fellow at the Foundation for Defense of Democracies, was the nonproliferation advisor to the U.S. delegation to the 2005 rounds of the Six-Party Talks and spent more than seventeen years in the U.S. government. Follow him on Twitter @_ARuggiero.