How Asia and Europe Will Exploit the Fed’s Rate Hike 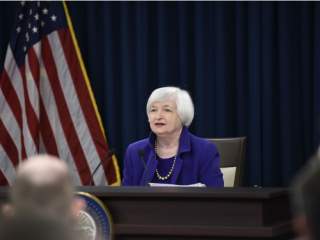 On Wednesday the Federal Reserve finally moved the target range for the federal funds rate higher for the first time since the financial crisis. With this decision, the United States took a significant step in testing its ability to operate with a bit of normality. Just what exactly constitutes “normal” for the United States and the rest of the global economy, however, is an open question. Other central banks seem poised to use the Fed’s rate hike as a springboard to accomplish their own goals.

Days before Wednesday’s decision, the People’s Bank of China intimated a shift from referencing the yuan against the dollar to a basket of thirteen currencies. It has done this before and little has changed in practice. But this time may be different. The divergence of the Fed from other central banks should cause the dollar to rise. By dislocating the yuan from the dollar ahead of the FOMC decision, the PBoC gives itself room to continue depreciating the yuan and perhaps reduce the use of reserves in its defense. Though the timing seems devious, this would be a prudent move from the PBoC’s perspective. However, the yuan re-reference in the face of Fed divergence could cause the dollar to strengthen, slowing the U.S. economy.

Japan and Europe have also been looking forward to this moment. Both are struggling to pull-out of disinflationary growth patterns, and both have undertaken substantial easing policies. Most recently, Mario Draghi and the European Central Bank increased the length of their stimulus package, expanded the breadth of assets purchased under the program and pushed interest rates further into negative territory. Even so, people were expecting more from the ECB. A divergent Fed now gives the ECB more potency in its policy. The Bank of Japan is facing a similar scenario, and has already proven its willingness to alter policy around Fed announcements. With both central banks struggling to meet their targets, the willingness to take the risk of sparking a surge in the value of the dollar may be strong.

It is worth noting that the Fed is only raising the front end of the yield curve. A large portion of economic activity is derived from the long-end of the curve (including mortgage rates), and long rates probably cannot increase too much without stifling economic activity. With U.S. potential probably somewhere between 2 and 2.5 percent, it will be difficult to sustain long rates that rise to any great extent.

Normality for the United States does not change too much with the first rate hike. Interest rates—especially on the long-end—are likely to remain relatively low for an extended period of time. This is partially because the U.S. economy could tip near or into recession with a sharp jump, but also because the Fed is going to be hyper-vigilant. The Fed has been tightening since tapering, and financial conditions are relatively tight for such a low Fed Fund’s rate. Tipping the United States into a recession would destroy any remaining confidence in the Fed, and cause more saber rattling from Congress about using a monetary policy rule.

The U.S. economy is not going to grow at a blistering pace—2 percent seems reasonable, but the further depreciation of the yuan will pressure commodities further by making them more expensive in yuan terms. This, in turn, will slow the global economy as commodity producers continue to struggle. Not to mention that the global adjustment to China’s new development path is probably behind schedule.

Raising rates is a necessity, but the rest of the world has its own plans. And this may come back to haunt the Fed. The Fed balance sheet remains elevated, and the pace of the balance sheet taper could be altered, but reversing course would destroy confidence—and there are few tools left at the Fed’s disposal.

More than anything, Wednesday's announcement show that the Fed’s work to normalize policy is only just beginning—and that the rest of the world is watching intently.