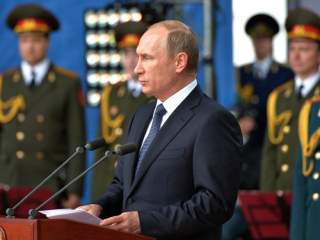 Like a cancer, international terrorism is dangerous because of the risk of metastasis, and its appearance in a certain place or in a certain time is just as difficult to predict. The worst scenario for Russia would be a collapse of a weak and poor Central Asian state, and its transformation into an uncontrollable territory ruled by armed groups with their own interpretation of Sharia law. This prospect is especially dangerous today, when Russia has fewer resources to support its allies than it did four years ago; its sharp reduction in investment for Kyrgyzstan is the first symptom.

The main buttress against this Central Asian scenario is the Russian economy. Revolutions and civil wars have their own demographic dynamics, and as long as young men from Tajikistan, Uzbekistan and Kyrgyzstan may come and earn their living in Russia, they will not join jihadi movements to overthrow political regimes at home. The first symptom of the emergent threat will be not domestic political events in poor post-Soviet republics, but statistical growth in sectors of Russian economy that traditionally rely on mass unskilled labor, like construction, retail and wholesale trade, housing and communal services.

With the slowdown of growth in Russia’s construction sector, the most difficult situation in 2016 will be in Tajikistan, where the current leadership is exacerbating tensions by cracking down on the Islamist opposition. This measure is considered a violation of the status quo, a set of peace rules that ended the 1992–97 civil war in that country. At that time, allowing Islamists into political life was among the most important conditions of ending the confrontation. The Tajik authorities have been escalating their opposition to the Islamic Renaissance Party, creating the threat of a tactical union with more radical groups. The possibility of a new civil war in Tajikistan would inevitably force Russia to intervene.

The Situation in Nagorno-Karabakh

The Nagorno-Karabakh conflict remains one of the most dangerous challenges in the Caucasus. Each side in the conflict has entered 2016 without any sign of compromise over the key issues—namely, the status of Nagorno-Karabakh and some other Azerbaijani territories controlled by Armenian forces, as well as the problem of refugees.

The possibility of exacerbation in the Nagorno-Karabakh conflict scares both Russia and the West. A “defrosting” that would lead to the deployment of international peacekeeping troops also bothers Iran, which claims that the conflict should be settled without the participation of any nonlocal powers. However, the Russian-Turkish confrontation, given the strategic cooperation between Azerbaijan and Turkey as well as between Armenia and Russia, raises the risk of a conflict that spreads well beyond the Caucasus region.

For Russia, a breakdown of the fragile status quo will have appalling consequences. First, it will bring into question the prospects of the Eurasian integration projects (the CSTO and EEU), for there is no consensus among their members concerning political and military support for Armenia. Second, it may sharpen the conflict of interests between Moscow and Baku, and even repeat the Georgian scenario of 2008. Third, the weakening of Russia’s position will inevitably lead some to suggest a wider internationalization of the peace process, which will ensure that Russian influence decreases.

Two main conditions are required for the negative scenario to develop in Nagorno-Karabakh: the deterioration of the Russian-Turkish confrontation, and an unprovoked escalation as a result of snowballing incidents on the border. The conflict with Moscow may push Ankara to increase its military support for Azerbaijan in order to press harder, not only on the unrecognized Nagorno-Karabakh, but on Armenia itself. Still, the military and political balance between Yerevan and Baku will not let either side achieve an overwhelming advantage, and will contain the conflict.

The dynamics of a potential Ukrainian crisis in 2016 will be defined by the political situation in Kyiv. In implementing the Minsk Agreements, the ball has long been in Ukraine’s court. In the first half of the year, Ukraine will be adopting amendments to its constitution that will establish a special status for the Donbass within the state and set rules for local elections in some areas of the Donetsk and Luhansk regions. Theoretically, the Ukrainian leadership may agree to settle the conflict, although throughout last year it was trying its best to avoid doing so. In practical terms, it remains highly unlikely.

The latest municipal elections demonstrated that President Petro Poroshenko has already moved past the point when he had free hand for enacting reforms. Now his approval rating is slowly sinking, the ruling coalition is getting weaker and the position of Poroshenko’s key parliamentary ally, Prime Minister Yatsenyuk, is openly disputed. Even if he wanted to, the president would not be able to gain the necessary support in the Rada for a compromise over the Donbass. Ukrainian politics will undoubtedly radicalize with the central government’s progressive political weakening.

Two symptoms of the Donbass crisis will drag on until the second half of 2016. The first one will be the failure to adopt amendments to the constitution proposed by the president. These amendments do not comply with the Minsk Agreements; nonetheless, the Ukrainian authorities have been referring to them as proof of their commitment to Minsk. If the Rada does not approve them in the current session, it will not be able to discuss amendments to the constitution for another year.

The second one is a vote on the bill concerning elections in the Donbass, which is supposed to be approved by the sides of the conflict (Kyiv and the rebels). Judging by the situation today, the two sides’ positions are incompatible, and it is difficult to imagine it will be approved—not to mention the Rada vote, where the same factors arise that have hindered the introduction of the president’s constitutional reform.

Most likely, in February or March it will become obvious that a settlement, or at least meaningful steps towards it, will not happen in the first half of 2016. This implies that the key question will be whether Ukraine is ready to resume hostilities.

A new full-scale war in the Donbass is hardly expected. The outcome of previous armed clashes between Kyiv and the People’s Republics does not leave much hope for the former. Besides, it is of particular interest for Russia not to let Donetsk and Luhansk lose. The western European partners among the “Normandy Four” are also against war, which Paris and Berlin see as a threat to security of the continent. Still, there is a possibility that Kyiv will decide to launch a new offensive in the Donbass because of renewed internal political struggles in Ukraine.

In case the war resumes, the Donetsk and Luhansk People’s Republics (DNR and LNR) have a clear political goal: to gain control over the whole territory of Donetsk and Luhansk regions. For Kyiv, the key military risk is losing new towns in the Donbass, should a new campaign fail. Moscow’s decision to limit the counteroffensive of the Donbass militia will depend on two conditions. The first is how valuable in the critical moment it will find the positions of its Ukrainian partners, whom it tends to listen to. The second is whether Moscow will achieve mutual understanding with Berlin and Paris on recognizing Kyiv’s responsibility for unleashing the hostilities.

We should stress that neither the Donbass nor Moscow wants a new war. It would cause great risks and huge, inevitable losses. Owing to its Syrian operation, Russia has started to find a new modus operandi in its relations with the West, and it knows the value of this achievement. The Kyiv authorities are still too popular with Western Europe for it to recognize their responsibility for the civil war. Ukraine realizes that its diplomatic positions are deteriorating, and will hardly dare to start a new war in such uncertain circumstances.

At the same time, Kyiv will struggle to find allies that would support such a war against the Donbass—except for the United States. The involvement of Turkey, much discussed in Ukraine, is rather doubtful. Naturally, Ankara will do everything to scare Moscow by supporting radical Crimean Tatar organizations or Kyivan hawks. However, it is hard to believe that Turkish military involvement in Ukraine will find understanding in Washington; this is something that the alliance can live without.

A fast settlement to the Ukraine crisis is highly unlikely, but so is war. It seems that the situation of 2015 will repeat itself in 2016: Kyiv will continue pressuring Donbass by means of bombardment and siege, avoiding meaningful negotiations on a settlement. The most patient actors will prevail.

Security threats in East Asia will be defined by the U.S.-China rivalry. Tensions are growing in relations between Beijing and the most important military allies of Washington in the region, Japan and Australia. East Asia’s most vulnerable security points in 2016 will be the Taiwan issue and the growing frictions in the South and East China Seas.

The victory of the Democratic Progressive Party in Taiwan’s presidential elections has left much unsettled. If the DPP publicly rejects the principle of one country or declares Taipei’s independence, Beijing will have nothing to do but to use military power to suppress what it sees as separatists. The risk of this scenario for the first time in four years has encouraged Washington to resume military deliveries to Taiwan: in 2016 the plan is to deliver arms adding up to $1.8 billion. Beijing considers this step a direct signal of support to the Taiwanese authorities, and has promised a harsh reaction. It is highly expected that China will not only introduce sanctions against major arms suppliers to Taiwan, but will also pressure U.S. companies that operate in the Chinese market.