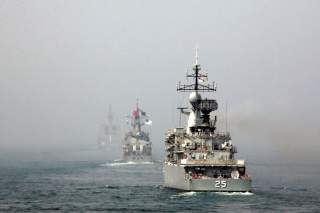 With U.S. strategy and attention increasingly shifting from the Asia-Pacific to the Indo-Pacific, the long-neglected states of South Asia and the Indian Ocean not named India and Pakistan will assume greater geopolitical significance in the years ahead. They include the landlocked Himalayan kingdoms of Nepal and Bhutan to India’s north and the island nations of Sri Lanka and the Maldives to the south. The largest and arguably most important of the group, however, lies to the east: Bangladesh.

The eighth largest country in the world in terms of population, Bangladesh has as many citizens—165 million—as Britain, France and Canada combined. It also has the world’s fourth-largest Muslim population, behind only Indonesia, India and Pakistan. (A helpful reminder that most of the world’s Muslims live outside the Middle East).

Good news rarely makes for good headlines in Washington, which may explain why Bangladesh receives so little attention. Bangladesh is growing fast. Very fast. Economic growth reached 7.1 percent last year and has exceeded 6 percent for two straight decades, lifting fifty million people out of extreme poverty in the process. Looking ahead, PricewaterhouseCoopers expects Bangladesh to be one of the world’s three fastest-growing economies through 2050, trailing only India and Vietnam.

Although the economy is humming along, the issue forefront on the minds of most Bangladeshis at the moment is the humanitarian crisis prompted by a brutal military campaign in neighboring Burma. Beginning in late 2016, attacks by the Burmese military on the Rohingya minority have prompted more than 650,000 refugees to flee to temporary camps in Bangladesh. Last November U.S. Secretary of State Rex Tillerson accused the Burmese government of pursuing “ethnic cleansing” against the Muslim-minority Rohingya.

Bangladesh is straining to provide for this massive influx of refugees and is appalled at what it sees as an orchestrated campaign by the Burmese military. Dhaka has expressed gratitude to Washington for the support it’s provided during the crisis but insists that international pressure on the Burmese regime must continue. Burma and Bangladesh are currently negotiating a repatriation deal that would allow for the gradual return of Rohingya refugees to transit camps in Burma but the details have yet to be finalized. Dhaka remains concerned a voluntary arrangement will not be upheld without sustained international pressure.

Like Pakistan, Bangladesh is over 90 percent Muslim. Unlike Pakistan, the current government in Bangladesh has adopted a zero-tolerance approach to Islamist terrorism. That wasn’t always the case. Islamist groups operated much more openly in Bangladesh during the tenure of the Bangladesh Nationalist Party, which ruled the country from 2001 to 2006. The party has been accused of harboring links to radical groups like Jamaat-e-Islami and of turning a blind eye toward more violent extremist groups like the Jamaat-ul-Mujahideen Bangladesh.

The Awami League government, which is now in power, has taken a much tougher stance toward Islamist groups—even more so since the July 2016 terrorist bombing of a Dhaka café that claimed twenty-two lives, the deadliest terror attack in the country’s history. Nevertheless, a number of terrorist and extremist militant groups with transnational linkages continue to pose a threat to Bangladesh and the region.

Public polling indicates that Bangladesh’s population is one of the most pro-American in the region, and officials in Dhaka are generally enthusiastic about further strengthening ties with the United States. They are particularly eager to increase bilateral trade, ease trade restrictions, reduce tariffs, and encourage more U.S. investment in the energy and power sectors. America is already the top importer of Bangladeshi goods, and the two have a Bilateral Investment Treaty and Double Taxation Avoidance agreement in place.

Clothing and textiles account for 80 percent of all of Bangladesh’s exports, yet its textile exports to the United States are subject to tariffs as high as 32 percent. Dhaka is seeking the type of duty-free market access the United States has extended to some of the poorest countries in Africa. A small proportion of Bangladesh’s exports received such treatment under the Generalized System of Preferences, but the Obama administration suspended Bangladesh’s status in 2013 to press Dhaka for judicial and labor reforms.

U.S.-Bangladesh defense cooperation, meanwhile, remains an area of strength and potential growth. The two currently have a high-level Partnership Dialogue and Dialogue on Security Issues in place. America transferred two coast guard cutters to Bangladesh in 2013 and 2015, while the Bangladesh Navy has engaged with U.S. Pacific Command for CARAT naval training exercises.

It’s not just relations with the United States that are on the upswing. Bangladesh has made significant strides in recent years improving ties with neighboring India. In 2015, the two countries signed a historic land-swap border agreement. A year earlier, Dhaka and Delhi accepted a UN tribunal decision delimiting their disputed maritime boundary.

In 2016 Bangladesh’s shipping minister insisted his country needed “stronger bilateral relations with India to save Bangladesh from any external aggression,” noting that Pakistan was “hatching a conspiracy against us.” India and Bangladesh currently conduct joint military training exercises and in 2017 agreed to further increase defense cooperation.

Ironically, Bangladesh also enjoys fairly robust ties with China. To be sure, it is a far more transactional and business-like relationship than China’s “all-weather” friendship with Pakistan. Nevertheless, some 80 percent of Bangladesh’s arms imports are Chinese-origin. In 2016 Chinese warships made their first-ever visit to Bangladesh, and in recent years Dhaka has purchased several Chinese corvettes, patrol boats, and a pair of Ming-class submarines. (India has offered to train the submarine crews).

China’s Belt and Road Initiative (BRI) looms large over the region. Bangladesh, still one of the poorest countries in the world, is naturally eager to promote infrastructure development and regional connectivity. It is seeking large-scale investments where it can find them and, for now, China is one of the only games in town.

However, there is also some skepticism in Dhaka about the broader strategic implications of the BRI, of the pitfalls of becoming ensnared in a Chinese “debt trap,” and of the underhanded tactics employed by Chinese firms. Just last week Dhaka blacklisted the giant Chinese state-owned enterprise, China Harbor Engineering Corporation, after the firm reportedly tried to bribe Bangladesh’s communications minister.

In nearby Sri Lanka, the corporation has been accused of illegally funneling $200 million to help re-elect Sinophile president Mahinda Rajapaksa in 2015. Back in 2006 Dhaka blacklisted another Chinese firm, Harbin Electric International, for its work (or lack thereof) in constructing a power plant in Bangladesh.

Notably, Japan recently won a bid to construct a multi-billion dollar port, LNG terminal, and coal-fired power plant at Matarbari, undercutting Chinese proposals to construct or upgrade ports at Chittagong and nearby Sonadia.

With the Trump administration promoting a new Free and Open Indo-Pacific (FOIP) strategy, Bangladesh will have new opportunities to diversify its sources of investment, strengthen ties with the United States, and position itself as a net contributor to security in the Indian Ocean. The latter concept should come naturally to Bangladesh, which is already the world’s largest contributor to UN peacekeeping missions.

In this regard, Dhaka should consider explicitly endorsing the Trump administration’s FOIP strategy, as well as its vision for regional infrastructure. That vision emphasizes transparency, responsible financing and high-quality standards—all things the BRI has been criticized for lacking.

For its part, the Trump administration should consider increasing the number of port calls and high-level defense exchanges with Bangladesh as well as bilateral and trilateral military exercises, potentially to include India and/or Japan. Bangladesh might also be considered for observer status at the annual India-U.S.-Japan Malabar exercises. Tokyo, a key U.S. partner in the FOIP strategy, recently announced it would be deploying “mobile cooperation teams” to Sri Lanka and Djibouti to promote cooperation on maritime security, and Bangladesh could be an ideal candidate for an expanded program.