How Bashar al-Assad Won the War in Syria 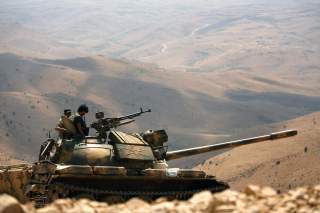 On August 21, 2013, the international community awoke to a scene of absolute terror. Broadcasted on television screens around the world were pictures and video of men, women, and even small babies sprawled on the floor, gasping for breath. Many were already dead from exposure to the sarin gas that was delivered from the Syrian army’s surface-to-surface missiles. The attack in the rebel-held suburbs of Damascus, which left an estimated 1,400 people dead according to U.S. intelligence community assessments, was the most gruesome chemical weapons strike since former Iraqi dictator Saddam Hussein gassed Kurdish civilians in the town of Halabja in 1988. Four years later, I still remember the New York Post cover page the next morning, dead Syrian children on one side and a grinning Bashar al-Assad on the other.

To the world’s credit, the 2013 chemical attack was so visually upsetting and such an appalling violation of international law that the United States and Russia, by then in complete opposition to how to manage the Syrian dictator, came together (with the endorsement of the U.N. Security Council) to force Assad to give up his declared chemical weapons stockpile and to enlist Syria as a signatory to the Chemical Weapons Convention. The first international chemical weapons inspectors were deployed on Syrian soil a short time later—and despite the enormous stress of working in a war zone and dealing with Syrian government officials who were less than truthful, managed to remove and destroy 1,300 tons of chemical weapons. “Never before,” the OPCW’s director boasted at the time, “has an entire arsenal of a category of weapons of mass destruction been removed from a country experiencing a state of internal armed conflict.”

Of course, what we now know—and should have recognized when the chemical weapons were being transported to ships in the Mediterranean—was that the Assad government didn't declare all of its stockpile. Indeed Damascus may still be producing chemical munitions somewhere in the country. As an exhaustive investigation from Reuters last week showed with alarming precision, Assad’s regime has lied, obfuscated, deceived and provided international inspectors with so much inaccurate information that the world will never know the full extent of the Syrian government’s chemical weapons program. In one case, OPCW inspectors were made to wait outside a facility while the government was suspected of cleaning the building of chemical remnants. In another instance, Syrian military officials told government witnesses being interviewed by the OPCW to change their stories.

The account described in Reuters has all the hallmarks of a regime so intent on saving its own skin and winning the war against its armed opponents that it’s willing to use some of the world’s most indiscriminate weapons in the field, regardless of the target—and then go to great lengths to cover it up and largely get away with it.

And yet, while all of this is a disturbing indictment of Bashar al-Assad’s leadership and his regime’s criminal behavior, it also exposes how wily, clever, and street-smart Assad’s government has been since the civil war began in 2011. Assad has been nothing but a survivor; President Barack Obama’s numerous warnings that it was only a matter of time before the dictator fled into exile has proved to be a wildly rosy assessment about as accurate as the Bush administration’s allegations of a Saddam Hussein connection with Osama Bin Laden.

In the summer of 2012, it did look as if Assad was on his way out. Thousands of Syrian troops were deserting the army out of disgust for the regime’s tactics or out of an abiding sense of fear that they would be killed or captured by the rebels they were sent to fight. Aleppo, the country’s cultural and economic capital, went from a regime-held city somewhat insulated from the revolution to one that was divided and on the frontline. The only thing keeping the regime afloat during this period were foreign Shia militia volunteers, discounted fuel prices from Iran, the overstretched 4th Armored Division led by Assad’s younger brother and constant Iranian weapons shipments.

Five years later, Aleppo is back in Assad’s control and it is the armed opposition now at its weakest point in the conflict. Whether we like it or not, the UN Security Council’s internal division, Iran’s organization and training of pro-Assad militias and Russia’s bombing campaign have produced a situation where the Assad family clan will be in charge for some time to come.

However, as critical as Russia and Iran’s military and financial support has been, Assad himself deserves much of the credit for staying in power. The way he has prosecuted the war has been as effective as it has been inhumane. So desperate he is to perpetuate the political order his father has built that he has pulled out all the stops, from deliberately releasing hardcore Islamists out of prison in order to infect the rebellion to destroying entire cities. Understanding that they had far too few troops to occupy rebel-held cities and towns after clearing them out, Assad’s generals and field commanders decided instead to adopt the kind of medieval starve-and-siege tactics that requires less manpower. Surrounding entire city districts, depriving everybody inside of the food, water, and medicine to survive, and bombarding them relentlessly until they surrender unconditionally turned out to be a faster way to reclaim ground. As illegal as these tactics are, the mass displacement of civilians, forced depopulation and the re-population of that newly-acquired territory with regime supporters worked. If they didn't, Assad would either be dead, facing a war crimes tribunal, or enjoying a new life in Russia.

At the present time, the United States, Europe, and most of the Arab world who would rightly prefer a more democratic and peaceful alternative to the current administration in Damascus are now forced to reckon with the hard reality that Bashar al-Assad will continue to be Syria’s president. Regime change in Syria, partly due to Washington’s unwillingness to get fully involved in a proxy war with combatants that increasingly operate with similar brutality, partly due to the the support of Syria’s allies, and partly due to Assad’s tactics, is now a dead letter.

The Trump administration has no choice but to figure out a policy that addresses these realities. Whatever that policy turns out to be, Syria will be a fractured, broken, chaotic, and violent country for a long time to come.