How Bibi and Obama Can Stop the Drama 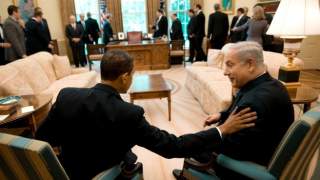 For the first time since the divisive debate on the Iran nuclear agreement, President Obama will meet today with Israeli Prime Minister Netanyahu. No one is under the illusion that after so much bad blood over the past seven years, and particularly after the past nine months, these two leaders will ever consider each other friends. But both have an interest in ending the drama and pursuing a quiet final year together.

The president has many other priorities during his last year in office, including tackling climate change, fighting ISIL, responding to an aggressive Russia and implementing the Iran agreement. He does not need the distractions and political headaches that come with a continued fight with the Israeli prime minister. This tension has also caused major fractures within the American Jewish community—a key Democratic constituency heading into an election year. The president and his party want to see this infighting end and the healing begin.

Meanwhile, the prime minister has also signaled in recent public statements that he is ready to move forward. He has taken great criticism in Israel for his handling of the U.S.-Israel relationship, from opposition politicians and from former security officials. A healthy relationship with the United States is critical to Israel’s security, particularly in light of the Iranian threat.

Getting the relationship back to business as usual should start with a common agenda that focuses on preventing Iran from obtaining a nuclear weapon, countering Iran's activities in the Middle East and deepening U.S.-Israel security cooperation.

Iran's nuclear program was the core of the public dispute between the American president and Israeli prime minister, and thus bridging that gap must be the starting point for future cooperation. One of Israel’s greatest concerns with regard to the nuclear agreement is that Iran will abide by the agreement in the early years of implementation, but that as the world turns elsewhere, it will start to cheat and eventually obtain a nuclear weapon. Another Israeli misgiving is about the second decade, when many of the constraints on the Iranian nuclear program will be lifted. At that point, Tehran will be able to cross the nuclear threshold in a very short time. These concerns are shared by the American administration too.

To cope with the joint nuclear threat, the two leaders can restart the type of cooperation on Iran that was so effective in the early years of the first Obama administration. They should reinvigorate a U.S-Israel high-level dialogue on a joint strategy to prevent a nuclear-armed Iran in the aftermath of the JCPOA. The dialogue should focus on coming to a joint understanding on how the nuclear deal with Iran will be implemented, how violations would be handled and what could be done outside the JCPOA to provide additional incentives for Iranian compliance.

The two allies can also open an intelligence and military dialogue focused on improving detection of any possible Iranian attempt to develop nuclear weapons and how they might respond jointly under various scenarios. This would include agreement on even deeper intelligence collaboration, aimed at detecting as quickly as possible any Iranian violation—as well as joint military planning focused on contingency scenarios, such as responding to the detection of a covert Iranian enrichment facility, new Iranian efforts at weaponization or other clear indicators that Iran has begun a breakout to a nuclear weapon.

Ideally, these steps could be codified as part of a formal side agreement, though that may be too ambitious given the current relations between the leaders. Nevertheless, the United States has a long history of providing meaningful side assurances to Israel outside of formal agreements.

This dialogue will serve the interests of both countries. It will provide Israel with greater clarity on American plans to enforce the nuclear agreement. And given Israel’s intense suspicion of Iran’s nuclear behavior, it will be useful for U.S. policymakers in finding weakness and vulnerabilities in their own plans and improving them.

The second challenge that should be addressed is Iran’s regional policy. Israel expressed a serious concern about Iran allocating some of the money it expects to receive to increase its support of terrorism and empower its proxies. This is also a concern for the United States and its Arab partners.

Obama and Netanyahu should leverage U.S.-Israel cooperation to counter Iranian support for its surrogates and proxies, particularly Hezbollah, the most direct Iranian-supported threat to Israel. It can also target IRGC activities in the Golan Heights and interdiction of Iranian weapon shipments to Gaza. Such collaboration should include high-level strategic dialogue, intelligence sharing and, where appropriate, joint covert action. Indeed, the United States and Israel have a strong history of working together on such matters as evidenced by the alleged joint operation to kill Hezbollah’s International Operations Chief Imad Mughniyah in 2008.

Lastly, the United States should also re-engage Israel in deep consultations about future bilateral security cooperation. The most important element would be to fast-track negotiations on a new 10-year memorandum of understanding regarding American military aid to Israel. The current agreement provides Israel with $3.1 billion per year in financing and is due to be renewed in 2017. But moving the date up and increasing the spending level would send a very clear signal to Israel and the rest of the Middle East that despite the tensions in the relationship over the past couple of years, the U.S.-Israel alliance remains a core component of American strategy in the Middle East.

In addition to the overall agreement, American aid should deepen support for Israel’s multi-layered missile defense architecture, including continued and increased investments in the Iron Dome, Arrow-3 and “David’s Sling” systems.

The United States can consider sales of new conventional weaponry that improve Israel's independent capabilities to counter its enemies. This will be important to alleviate Israeli anxiety that in the aftermath of the nuclear agreement with Iran, the United States will sell arms to Gulf partners that threaten Israel’s qualitative military edge. But more important than the new weapons, the United States can provide Israel reassurances that Washington’s aid to the Gulf States will focus on countering Iran’s low-end asymmetric activities, which require training and special forces collaboration—not high-end weapons systems such as the Joint Strikefighter.

Still, the Israeli-Palestinian conflict may be the one major potential bump in the road that could upend what most American and Israeli officials hope will be a final year of business as usual. But here, the White House seems to recognize that there is little hope for progress in the near future given the mutual mistrust between Israelis and Palestinians.

Instead, the focus for the next year should be on preserving the two-state solution in the future by convincing both sides to refrain from the types of steps that would make it impossible. This means intervening to mediate and tamp down violence, convincing Israel to forgo the types of settlement activity that could make a future agreement impossible, and strengthening Palestinian government institutions, or at a minimum, preventing their collapse. These objectives should be achievable without major strains on the U.S.-Israel relationship.

In the end, it seems quite clear that both Obama and Netanyahu are resigned to spending one last year together avoiding drama and tolerating each other. Certainly that is what the security and political establishments are both hoping for, as well as most Israelis and the American Jewish community. But the Middle East is a messy and unpredictable place, and we should not discount the possibility that despite best efforts on all sides, events might again intervene and put these two leaders at loggerheads.

Ilan Goldenberg is the Director of the Middle East Security Program at the Center for New American Security. Avner Golov is a Harry S. Truman Scholar at the Fletcher School of Law and Diplomacy, Tufts University, a researcher at the Center for New American Security, and a research fellow at Israel's Institute for National Security Studies in Tel Aviv University. They are two of the co-authors of a recent report on U.S. Strategy after the Iran Agreement, from which this article is derived.