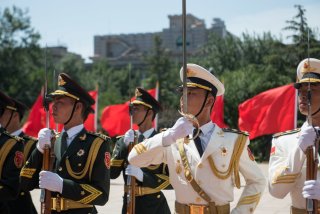 The Biden administration’s new National Security Strategy (NSS) attempts to explain how the United States can win a global struggle for democracy over authoritarianism. In doing so, the document reveals a wide gulf between Washington’s ambitions and its capabilities—a gulf which threatens to drive America into years of dangerous, likely-futile attempts to decisively “shape” the global order and “win” the coming era of great power competition.

The Biden administration argues that America and the world are engaged in a critical struggle with “powers that layer authoritarian governance with a revisionist foreign policy.” The NSS states that Russia and China (“the largest autocracies”) threaten the interests of even non-democratic states by “…waging or preparing for wars of aggression, actively undermining the democratic political processes of other countries, leveraging technology and supply chains for coercion and repression, and exporting an illiberal model of international order.” The NSS suggests the adversarial elements of U.S. security policy are primarily aimed at only two powers; in other words, the core dynamic driving Washington’s grand strategy today is really great power competition, not ideology per se.

For the Biden administration, it appears the only relevant difference between Russia and China lies in their level of power, or ability to seriously threaten the United States, the West, and the world order. Both nations apparently pose dire threats, but China is “…the only competitor with both the intent to reshape the international order and, increasingly, the economic, diplomatic, military, and technological power to advance that objective.”

Despite the Biden administration’s avowed belief in a genuine and critical need to cooperate with China on common threats such as climate change, pandemics, and nonproliferation, the NSS reaffirms the Trump administration’s basic assessment that China and Russia have

…concluded that the success of a free and open rules-based international order posed a threat to their regimes and stifled their ambitions. In their own ways, they now seek to remake the international order to create a world conducive to their highly personalized and repressive type of autocracy.

It is hard to see how such a zero-sum characterization of the presumably dire threat that China (and Russia) poses to the world can be squared with the document’s assertion of a need to constructively engage with China in combating what it correctly calls the “existential” threat posed by climate change. China is unlikely to join U.S. efforts while Washington is working hard to limit Chinese development, as reflected in Commerce Department’s recent restrictions on Chinese companies’ access to advanced semiconductors and other cutting-edge technology. There is a tension between these aims that the NSS does not confront.

The document brings a polemical edge to defining Chinese interests. For example, it states that China seeks only to undermine “…the autonomy and rights of less powerful states…” while the United States seeks only to “…support every country, regardless of size or strength, in exercising the freedom to make choices that serve their interests.” In reality, neither nation is without fault in defending the autonomy and rights of smaller powers and upholding the rules of international regimes. But rather than acknowledging this fact and stating a commitment to work with China to reach mutually acceptable norms and rules, the NSS approaches the problem as a Manichean struggle over freedom in which China’s goals are virtually unmovable and threatening while the United States is the arbiter of what constitutes a just and free order. Such a zero-sum framing of the Sino-U.S. competition excludes the possibility that in many areas there might actually be room for U.S.-China agreement on needed reforms or, failing that, for genuine compromise.

Across Europe, Asia, the Middle East, Africa, and Latin America, countries are clear-eyed about the nature of the challenges that the PRC [People’s Republic of China] poses. Governments want sustainable public finances. Workers want to be treated with dignity and respect. Innovators want to be rewarded for their ingenuity, risk-taking, and persistent efforts. And enterprising businesses want open and free waters through which their products can be traded.

There are certainly important shortcomings and abuses in China’s record of overseas engagement, but the NSS ignores a similar history of U.S. shortcomings and abuses. More importantly, the one-sided characterization of China’s record as malicious in intent—rather than admitting the far more complex reality of contending interests that shape Chinese behavior—undermines the possibility of working with China to improve its practices. It also tends to offend the leaders of the many countries that maintain productive economic relationships with both China and the United States.

Many of these countries have signaled loudly to Washington that they dread the possibility of being forced to choose between the two powers, and the NSS reflects the fact that the administration is listening to these concerns. As the document states, “We also want to avoid a world in which competition escalates into a world of rigid blocs.” This, together with the NSS’s renunciation of military force to remake other societies, marks a significant and welcome break with the Trump administration’s dangerous intimation that the United States intends to overthrow the Chinese Communist Party.

Yet the NSS’s characterization of Chinese motivations as malign and its unvarying criticism of Chinese behavior across the full range of statecraft both indicate clearly to Beijing that Washington regards Chinese success as unwelcome. The United States certainly should apply pressure and criticism—many Chinese practices are objectionable, and some are unacceptable. But if the pushback is not accompanied with an equally robust path for mutual adjustment, cooperation, and shared achievement, it will be very difficult to avoid the disastrous great power conflict that the NSS professes to eschew.

Jake Werner is a Research Fellow at the Quincy Institute.