How Biden Can Foster Real Peace in the South Caucasus 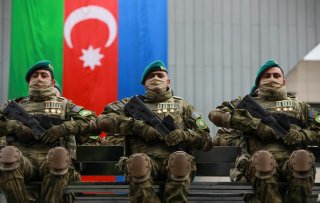 Nagorno Karabakh (known as “Artsakh” to Armenians) was attacked by Azerbaijan on September 27, 2020. After forty-four days of war, in which Turkish drones and jihadist mercenaries shaped the battlefield in Azerbaijan’s favor, more than 4,000 Armenians were killed. Sidelining the West, Russia’s President Vladimir Putin brokered ceasefire terms on November 9, calling for Armenia to relinquish territory in Azerbaijan. The ceasefire also called for the deployment of Russian peacekeeping forces.

Columbia University has just completed a thorough implementation review of the ceasefire terms between Armenia and Azerbaijan, as well as Russia’s role.

While Armenia withdrew its forces as called for by the ceasefire terms, Azerbaijan continued its provocative and aggressive actions. It seized 41 square kilometers of Armenian territory on May 21, 2020, and launched another cross-border operation on November 14, seizing thirteen villages adjoining the city of Gabriel south of Artsakh, the southern Syunik region, and along the Armenia-Azerbaijan border near Lake Sev. 40,000 displaced Armenians are presently homeless as a result of these recent operations.

In addition to Azerbaijan’s continued cross-border aggression, the situation is aggravated by its failure to return Prisoners of War (POWs). Outside the terms of the ceasefire, Azerbaijan and Turkey now publicly demand a sovereign corridor through Armenia connecting Azerbaijan and Turkey which would be the death knell of independent Armenia. It would also eliminate the remaining Armenians of Artsakh. President Ilham Aliyev continues his war-mongering and racist hate speech. The regime of Recep Tayyip Erdogan is now pursuing negotiations with Armenia through special envoys, instead of simply establishing diplomatic relations.

Armenia’s Prime Minister Nikol Pashinyan proposed stationing Russian troops on the border between Armenia and Azerbaijan to deter ceasefire violations. Armenia filed a lawsuit with the UN International Court of Justice (ICJ), accusing Baku of violating the International Convention on the Elimination of All Forms of Racial Discrimination. The ICJ instructed Azerbaijan to "take all necessary measures to prevent the incitement and promotion of racial hatred and discrimination including by its officials in public institutions targeted at persons of Armenian national or ethnic origin.

Further roiling tensions, Aliyev maintains that large parts of Armenia including the capital Yerevan should be included in Azerbaijan. This claim is a bargaining tactic as the countries start talks on border demarcation and transportation agreements. But it fits the authoritarian pattern of promoting false historical narratives to maintain corruption and power. Today, Azerbaijan has occupied 41 sq km of Armenia proper and frequently takes hostages. It continues to fire into Armenia without counterbalance from Russian peacekeepers who are supposed to stop such acts.

While Russia is tasked with peacekeeping and the mandated mediators including the United States and France are excluded, Russia and Turkey established their own ceasefire monitoring center. The initiative is problematic because Turkey was not a signatory to the ceasefire. As a party to the conflict, Turkey backs Azerbaijan politically and militarily.

According to Sergey Naryshkin, head of the Russian Foreign Intelligence Service, “We know the work of Turkish intelligence, and we see certain elements of its work.” He also indicated that Russia had obtained confirmed intelligence about the participation of Syrian mercenaries on the battlefield. “We have precise information about the presence of terrorists in the combat zone in the Karabakh region, from the Middle East, and from Syria primarily.” Turkish officials are boasting about Turkey’s role in defeating Armenians.

The Lachin corridor, which connects Armenia and Artsakh, is a flashpoint. It is patrolled by Russian peacekeepers and Azerbaijani soldiers, but there have been incidents, including explosions and the killing of Armenian civilians.

Russian peacekeepers restrict access to the Lachin corridor by international media and humanitarian organizations. Transportation talks collapsed after Azerbaijan insisted on building the Zangezur corridor through Armenia, connecting Azerbaijan and the Nakhichevan Autonomous Republic, an Azerbaijani enclave in Armenia.

POWs recount mistreatment beginning immediately upon detention. They were beaten, tortured, and humiliated by the military personnel who had taken them captive, with abuses continuing during interrogations and the duration of their time in custody. POWs were denied sufficient food or water. They were subject to sleep deprivation and minimal medical attention.

Russian peacekeepers initially played a useful role, preventing further aggression by Azerbaijan. At this stage, however, a multilateral approach would be more effective. In 1994, the Organization for Security and Cooperation in Europe established the Minsk Group co-chaired by Russia, France, and the United States. The Minsk Group can ensure greater transparency and more effective peacekeeping operations.

The Minsk Group should accelerate talks over border demarcation and transportation agreements, while establishing buffer zones that are enforceable and effective. It can also take the lead on monitoring, calling out the perpetrators, and naming parties responsible for escalating violence.

The Minsk Group must not turn a blind eye to Turkey by allowing Ankara to establish a broader footprint in the South Caucasus. A direct transport link through Nakhichevan to Baku will destabilize the region and must be prevented. Turkey is a party to the conflict, unqualified to participate in peace enforcement. The joint Russian-Turkish peace monitoring center should be disbanded.

The Biden administration should insist on the return of all POWs and accountability for their captors. France could call on the European Court for Human Rights to play a role, which would deter future crimes.

A multilateral approach would limit Russia’s role in the post-Soviet space. It also presents an opportunity for the United States and Russia to work together on a regional conflict where their interests overlap.

David L. Phillips is Director of Columbia University’s Program on Peacebuilding and Human Rights. He served as a Senior Adviser and Foreign Affairs Expert at the State Department during the administration of Presidents Clinton, Bush, and Obama. He was also chairman of the Turkish Armenian Reconciliation Commission and authored the diplomatic history monograph on the Protocols for normalizing relations between Armenia and Turkey.