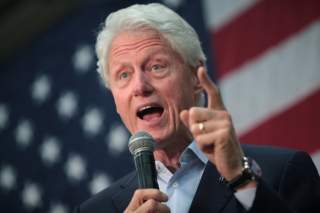 On October 22, 1996, President Bill Clinton, running for reelection, made what the New York Times characterized as “a rare turn to foreign policy on the campaign trail.” Speaking in Detroit, he called for NATO to extend full membership to a group of former Soviet bloc nations by the following spring. Thus did Bill Clinton move his nation into a new era of foreign policy based upon a dangerous philosophy of American hegemony justified by American exceptionalism.

This philosophy also drove Clinton’s intervention in war-torn Serbia (under NATO auspices). These initiatives, from an administration notable for its concentration primarily on domestic issues, constituted a major turning point in U.S. international relations. So much of what has happened since—the United States’ penchant toward regime change in countries deemed troublesome, the rancorous relations with Russia, the cultural wildfires of the Middle East—emanate from the frothy humanitarian vision of the Clinton presidency.

And Hillary Clinton embraces this turning point with a view that it represents America’s status as the world’s “indispensable nation.” If she becomes president, the outlook that captured Bill Clinton’s presidency will be more entrenched than ever in America’s foreign-policy firmament. That poses a question: What precisely is that outlook, and how did it lead America astray in its global missions?

When Bill Clinton issued that call for NATO expansion in October 1996, he was facing pressure from his Republican opponent, former Senator Bob Dole, who suggested Clinton was a bit of a wimp for not boldly embracing NATO expansion. Even after the president’s Detroit speech, Dole chided him for “dragging his feet” and added, “We think it’s time for the foot dragging to stop.” Hence, it seems that Clinton’s action, or at least the timing of it, was influenced in part by political considerations.

When Reagan began his momentous outreach to Mikhail Gorbachev in 1985, he outlined his principles of action in dealing with the Soviet leader. First, he acknowledged that Gorbachev wouldn’t be acting on his own but at the behest of his politburo. Thus, the president recognized that Gorbachev couldn’t do anything inimical to his country’s fundamental interests. Second, a top priority was to alleviate the distrust that had festered for decades between the two nations. As former U.S. ambassador to Moscow Jack Matlock has noted, this reflected a Reagan understanding that no progress could be gained on any major issues without this alleviation of distrust. Third, whatever breakthroughs he could reach, they must not be hailed as victories because, as Matlock explained, “that will simply make the next achievement more difficult.”

The first President Bush continued these principles in dealing with Moscow after the end of the Cold War and through the collapse of the Soviet system. The big questions, for both Russia and the West, surrounded the matter of German unification. In pressing for Russian acceptance, Bush administration officials suggested the West had no interest in “exploiting” the Cold War victory by moving NATO eastward—even, in early conservations, into the former East Germany itself. In early February 1990, Secretary of State James Baker asked Gorbachev a crucial question: “Would you prefer to see a unified Germany outside of NATO, independent and with no U.S. forces, or would you prefer a unified Germany to be tied to NATO, with assurances that NATO’s jurisdiction would not shift one inch eastward from its present position?” Gorbachev’s reply: “Certainly any extension of the zone of NATO would be unacceptable.”

Clearly, Baker and his boss were playing on presumed Russian fears of an independent Germany untethered from NATO protections—and diplomatic constrictions—and also (hint, hint) free to develop its own nuclear deterrence. But Baker clearly signaled to Gorbachev that the United States and the West would forgo eastward expansion in exchange for Russian acceptance of German reunification. Baker confirmed this in notes he took during the conversation.

But Baker had committed a diplomatic gaffe, since NATO jurisdiction covering only part of Germany was unworkable. Western diplomats had to walk back the Baker framework so the alliance would protect all of Germany. This ultimately was accepted (with a bundle of Germany cash going to Russia as part of the agreement)—but implicitly within the context of the earlier Baker assurance that NATO would not move “one inch eastward” beyond the agreed upon shift to include the old East Germany.

We see here what might be called the old foreign-policy outlook at work. It encompassed balance-of-power thinking, buffer zones and recognition of all nations’ fundamental interests. The Reagan principles remained intact—mutual trust, limits of diplomacy based on respective national imperatives, no diplomatic gloating.

Bill Clinton rejected all that. In 1999, he brought about the first round of NATO enlargement when the Czech Republic, Hungary and Poland joined the Atlantic Alliance. George Kennan, one of his generation’s most distinguished diplomatic thinkers, warned in 1997, “Expanding NATO would be the most fateful error of American policy in the entire post-cold-war era.” He said it would “inflame the nationalistic, anti-Western and militaristic tendencies in Russian opinion” and would “restore the atmosphere of the cold war to East-West relations.”

But Clinton’s action was only the beginning, rendering the Kennan warning all the more trenchant. Under his successor, George W. Bush, NATO expanded further to include Bulgaria, Estonia, Latvia, Lithuania, Romania, Slovakia and Slovenia. Russian President Boris Yeltsin cried foul, warning, “This is the first sign of what could happen when NATO comes right up to the Russian Federation’s borders. . . . The flame of war could burst out across the whole of Europe.” But Russia under Yeltsin was too enervated to do anything about it, and so the Russian people seethed in silence until Vladimir Putin became president—and the West proposed to move NATO right up to wide expanses of the Russian border by pulling into NATO both Georgia and Ukraine.

That’s when Putin decided to act—on the basis that no nation can allow other powers to dominate territory right next door. The potential vulnerability to security is just too great. Thus, when Georgian leader Mikheil Saakashvili sought to reincorporate two separatist regions, Abkhazia and South Ossetia, Moscow invaded Georgia and brought the two regions under its protection. Years later, when the United States under Barack Obama and the West fostered a street revolution against an elected Ukrainian government that favored Russian interests over the West’s, Putin moved once again to protect what he viewed as Russian security. He invaded Crimea, with its key Russian naval base at Sevastopol and a population that was 60 percent ethnic Russian. He also supported ethnic Russians in eastern Ukraine who resisted being pulled into a Ukrainian plunge to the West.

And so we now have a powder-keg nation between Russia and the West, simmering in the heat of ethnic tensions and beset by a proxy war between East and West that could detonate a global clash at any moment. It’s difficult to see how this could have happened if Clinton had continued the foreign policy outlook he inherited from Reagan and H. W Bush—and then passed it along to the George W. Bush and Obama administrations. Victoria Nuland, the U.S. assistant secretary of state for European and Eurasian affairs, has estimated that the United States invested more than $5 billion to support Ukraine’s pro-Western forces between 1991 and 2013. That’s a lot of involvement in another country’s internal politics. The University of Chicago’s John J. Mearsheimer, a leader of the country’s foreign-policy realists, lamented this kind of intrusive foreign policy activity in a blistering 2014 piece in Foreign Affairs. His title: “Why the Ukraine Crisis Is the West’s Fault: The Liberal Delusions That Provoked Putin.”

But Clinton helped set the stage for this tweaking of Russian sensibilities also by fostering the seventy-eight-day NATO air campaign against Serbia in 1999. A Russian client state for generations, Serbia had been trying to pacify its Kosovo region, which was in revolt against Belgrade and bent on seceding from Serbia. Once Serbian leader Slobodan Milosevic capitulated to Western nations in response to the devastating bombing of his country and assurances from NATO that Kosovo would not become an independent nation, NATO sent in a ground force to secure Kosovo and turn it into an autonomous region of Serbia run by majority Albanian Muslims under United Nations auspices. (The West later forced Serbia to accept full Kosovo independence.) NATO, created at the dawn of the Cold War as a defensive alliance, had invaded a sovereign nation under the banner of humanitarian interventionism and Western universalism.

The NATO bombing campaign accentuated the post–Cold War pattern of Western inclinations to trample upon Russian sensibilities. After Yeltsin’s angry protests against NATO’s initial expansion moves in 1999, the West extended to Russia three assurances: that NATO’s military intentions would remain entirely defensive, that it would become essentially a political alliance dedicated to the spread of democracy and capitalism, and that it would invite Russian participation in matters involving European security. “The war in Yugoslavia,” wrote Johns Hopkins University professor Michael Mandelbaum, “gave the lie to all three.”