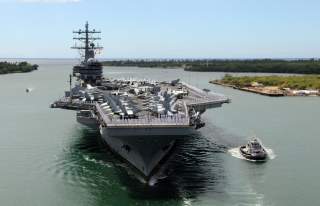 Editor's note: The following is a translation of Chapter 14 of the book If the U.S.and China Go to War《假如中美开战》 by the author and analyst Chen Pokong. The current volume was published in Chinese in 2013 and was later translated to Japanese.

The chapter sketches the hypothetical beginnings of a conflict scenario between the United States and China. In it, the U.S. responds to provocative Chinese cyberattacks by launching one of its own, tearing down the Great Firewall. In response, Chinese authorities clamp down Internet access completely, which America quickly responds to. Ultimately, regime-organized street violence endangers the lives of American consular staff, and U.S.-China relations quickly descend from the current modus vivendi to outright hostilities.

While both the United States and China can be expected to avoid going to war, it’s by no means difficult to imagine a scenario in which such a war might break out. Let’s consider such a development from the perspective of a young Chinese computer technician named Xiaolu:

After returning home from work one Friday evening, Xiaolu follows his usual practice of turning on his home computer and preparing to access his favorite overseas websites through proxies that will help him break through the Chinese government’s internet firewall. To his great surprise, he finds himself able to freely browse the Voice of America website without a proxy. He tries the BBC Chinese-language website, and then Radio Free Asia, Epoch Times, Boxun, the Chinese-language websites of the New York Times and the Wall Street Journal. . . surfing all of them with ease, he wonders if there’s some bizarre fluke in the system. He quickly telephones a friend and tells him to give it a try, and the friend reports the same experience. Overjoyed, Xiaolu contacts all of his friends and tells them to log onto the internet as fast as they can.

The situation continues the next day, and China’s streets and microblogs are abuzz with the news. People wonder if the Chinese government has suddenly decided to lift its internet blockade, and if this means political reform has also been launched.

Xiaolu stays glued to the internet all the next day and evening, too excited to sleep until he finally drifts off near dawn. By the time he awakens, the sun is high and the clock shows that noon is approaching. Luckily it’s still the weekend, and Xiaolu doesn’t need to be at work. Rolling groggily out of bed, he slouches over to his computer and goes online again, only to see a blank wall. Not only the foreign websites, but even China-based websites have disappeared and have been replaced with a uniform message of “Page not found.” Shocked, disheartened and angry, Xiaolu wonders what happened. He turns on his television just in time to hear a CCTV presenter read out this news bulletin:

“The United States has used the pretext of alleged Chinese hacker attacks on American websites to blame on the Chinese government and People’s Liberation Army. These baseless accusations originate from the pathological fantasies of certain individuals in the United States, and we have always categorically refuted them. The United States is now using the pretext of ‘freedom of information’ to interfere with China’s normal internet operations and oversight. This is a genuine cyberattack and a blatant cyberinvasion. It is a plot to overturn the Chinese government.

Interfering with and sabotaging China’s internet is a brazen violation of Chinese sovereignty and dignity. It is a last-ditch effort by American hegemonism to obstruct China’s rise following its failure to impose ‘peaceful evolution.’”

Xiaolu now understands that his earlier access to overseas websites was due to the United States playing a technological wild card that destroyed China’s internet blockade. His current inability to go online is due to the Chinese government taking the drastic step of cutting off all internet access after losing its “Great Firewall” to America’s technical superiority.

Through his shortwave radio, Xiaolu hears an announcement by the U.S. government:

Related reports and discussion show that the cyber operation, codenamed “Airborne Freedom” and launched by the United States, is in fact retaliation for a cyberattack by China. China has for some time been carrying out cyberattacks and cyberespionage against U.S.-based websites, and repeated warnings from Washington to end the attacks have met with only temporary pullbacks by Beijing, followed by renewed onslaughts. Reaching the end of its patience, the United States has finally decided to take action, and a full-scale cyberwar has been launched between China and the United States.

With internet access cut off, Chinese netizens begin taking to the street to express their indignation, their eyes directed straight forward or upward to signify their silent protest. The Chinese government issues an announcement: “The relevant departments have cut off internet access only as a temporary measure and as the only option. The United States, which launched a cyberattack to interfere with and sabotage normal internet operations in China, must take full responsibility.”

On the third night, internet access is miraculously restored. Strangely, however, unlike before, only overseas websites can be accessed, and almost no China-based websites. Xiaolu is initially baffled, but after surfing overseas websites, he gains an understanding of how the situation has developed.

It turns out that after the Chinese government cut off all internet access, the United States used satellite technology to provide wireless internet service to China. Operation Airborne Freedom has entered its second phase. The U.S. government explains its rationale: “We first of all need to ensure that American organizations in China as well as the U.S. Embassy and consulates can continue to access the internet. . . . At the same time, we are helping the Chinese people to freely access information. . . .”

The Sina and Sohu microblogging websites that Chinese netizens normally use have ceased operation, and have been replaced by internationally dominant social media such as Facebook and Twitter. The Chinese Baidu search engine has stopped working, but Google is available as a substitute, and Chinese netizens rejoice.

The next day, the Chinese government plays a new card. The State Council issues a “Notice Regarding the Suspension of Internet Access”:

“Malicious interference and sabotage by hostile overseas forces resulting in severe chaos in the arrangements for our country’s internet management has aroused mass outrage among the people. In order to ensure state security and normal information access, from this day forward the relevant departments will carry out comprehensive inspection, maintenance and rehabilitation of the internet. During this time, internet access will be suspended throughout the country.

Specific provisions are as follows:

1. Any work unit or individual who without authorization accesses the internet will be subject to confiscation of his computer, a fine, dismissal from employment or other penalties.

2. Any individual who uses the internet to create or spread rumors or to transmit reactionary information, and in particular any individual who incites opposition or subversion of the government, will be held criminally liable.

3. All internet cafes will be temporarily closed until further notice.

4. Sales of computers must be registered under the purchaser’s name. . . .”

Over the next few days, China’s netizens continue to enjoy access to overseas websites, and there is an explosive increase in satirical comments about the Chinese government on Facebook, Twitter and overseas Chinese internet forums. Rumors spread of police in some localities going door-to-door to examine internet browsing histories. Official media begin reporting on some people being investigated and having their computers confiscated. Overseas media report that rights defenders are being summoned and warned by the police, while some dissidents have been placed in criminal detention on allegations of using the internet to create or spread rumors to incite subversion of the government.

Mobilized by netizens through Facebook and Twitter, increasing numbers of people begin standing in the streets with their eyes directed forward or upward in what come to be known as “stand-ins.” Internet posting proclaim: “The Chinese people have stood up!” As another day passes, police are mobilized in a massive operation during which they physically push people away from “stand-ins.” Some protesters who resist are arrested. Four police officers grab Xiaolu by his arms and legs and carry him off as he struggles and yells out, “The Chinese people have the right to stand up!”

China’s PLA Daily publishes a commentary entitled “Cyberinvasion is a War of Aggression,” which states:

“We must point out that cyberinvasion is a war of aggression. We sternly warn the American hegemonists that today’s China is not the China of 1840; today’s China is not a China that can be bullied or trampled upon. Under the leadership of the great Chinese Communist Party, we have achieved economic liftoff and military modernization that will bring about the great revival of the Chinese people. Our country and our people have the capacity to defend our homeland. In the face of serious provocation, the full force of the Chinese People’s Liberation Army will resolutely follow the Party’s command and is prepared to go to war at any time in retaliation against any who dare aggressive action against our country’s sovereign rights and interests. We are prepared at all times to fight and to emerge victorious in repelling a frontal assault by the invaders. . . .”