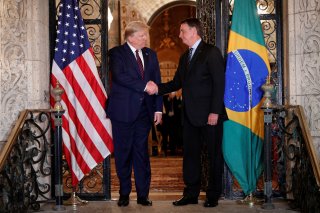 President Donald Trump’s March 7, 2020, dinner meeting with Brazilian president Jair Bolsonaro at Mar-a-Lago will be remembered primarily for bringing the U.S. leader into direct contact with Brazilian government officials who subsequently tested positive for coronavirus, potentially putting the U.S. president at risk. That was not the intended takeaway. Rather, Bolsonaro, a self-described Trump admirer, had hoped to use the meeting to bolster support among his own domestic political base while also seeking to undergird the bilateral relationship with concrete steps that, until the election of both presidents, would have been virtually unthinkable. Coronavirus aside, observers will miss a major, transformational development in hemispheric affairs if they overlook the pro-American shift that Bolsonaro seeks in the bilateral relationship.

Anyone looking at the U.S.-Brazil relationship for more than thirty seconds quickly comes to the realization that, while the potential for cooperation is huge, the reality is starkly different. Despite its size, wealth, democratic traditions, and global ambitions, Brazil has generally not been viewed in strategic terms by most U.S. policy planners, who have simply not devoted adequate time at the most senior levels of government to develop the relationship. This is due in part to Brazil’s physical location in South America, its limited hard power capabilities, and its generally cool institutional relations with the G7 and North Atlantic nations, pillars of the traditional U.S. alliance structure.

For its part, over the years and various administrations, Brazil has viewed its core strategic interests through a South American lens. Therefore, rather than seeing itself primarily as a partner with the United States, Brazil has sought to limit U.S. influence in the region and to use international institutions including the United Nations, the Organization of American States, and various sub-regional groupings to balance the asymmetrical capabilities of the United States to project power and to shape the hemispheric narrative.

In practical terms, this meant that, especially under Workers Party governance, Brazil was at times working actively against U.S. interests in the region, particularly in its support for the Castro regime in Cuba and in the active enabling of the Chavez/Maduro regime in Venezuela, among others. It also meant the breakdown of the Free Trade Area of the Americas, engineered by Brazil some fifteen years ago so as not to have to operate within a trade and economic context dominated by the United States. Brazil’s economy is relatively closed, and bilateral trade and economic relations have been fraught for years. The rise of China this century, now Brazil’s top trade partner, and Brazil’s (mis)alignment with the China-dominated BRICS, provided additional freedom of economic action as Brazilian leaders worked to check U.S. ambitions across Latin America and the Caribbean as a means to strengthen their own.

Within this historical context, Bolsonaro’s new vision for bilateral relations is revolutionary. At Mar-a-Lago, he and his senior officials made clear their desire for enhanced political and economic relations with the United States. They want closer military and technology cooperation and see themselves politically aligned. For example, the Bolsonaro government has completely reversed Brazil’s approach to Venezuela, a top White House priority in Latin America, moving from engagement and support for Maduro to an adversarial approach, even announcing the closure of Brazil’s embassy in Caracas. There are limits, however, including military action to remove the odious Maduro regime. Call it the “Meatloaf Doctrine” because Brazil would now do anything for the United States but they won’t do that. Meanwhile, Bolsonaro has also spoken openly about his skepticism of both China and also the new government in Argentina, although he has now walked back from earlier comments. There is even talk of a bilateral free trade agreement, a long-sought goal of many in the binational business community.

For the Trump administration, such rhetoric and indeed actions have been a Godsend. To have the leader of the most populous, largest economy and democracy in Latin America do a 180 and now intentionally pursue a close political and economic relationship with the United States could not have been better scripted.

But rhetoric is one thing; reality quite another, particularly on trade. And the reality is that the United States is now in the midst of a coronavirus pandemic, with the stock market deep in the bear market territory, during an election year. As a result, the desire expressed by both presidents at Mar-a-Lago, to have a new bilateral economic relationship developed this calendar year, would seem to be, in diplospeak, ambitious. Even in the best of times, the appetite in Washington to conclude a bilateral trade agreement with Brazil is uncertain, as parochial and protected interests, long-standing trade disputes, and business climate complications quickly overwhelm any strategic vision. In the current environment, it would be that much more difficult. It is also unclear how Brazil itself would be able to navigate a negotiation with the United States, given its own requirements within the MERCOSUL context that binds its trade diplomacy to Argentina, Paraguay, and Uruguay.

But wait, as the old Ginsu knife commercials implored, there’s more. Anything that requires Congressional approval in the United States will likely run into a wall of opposition. Democrats tend to be more skeptical of generic trade deals than Republicans, although presumably trade negotiations between the United States and Brazil would take as a point of departure the US-Mexico-Canada Agreement, which received significant Democratic support. Nonetheless, not much of significance will move through Congress this year as both parties will key on the November elections in anticipation of gaining a renewed political mandate.

Equally importantly, observers have watched with growing alarm as the Bolsonaro administration has taken a seemingly cavalier attitude toward protection of the Amazon, relaxing regulations, encouraging logging, and downplaying the significance of environmental damage. They are also mindful of the bombastic and derogatory pronouncements of the president and those in his inner circle targeting indigenous people, Afro-Brazilians, and women, just to name a few, and his stated nostalgia for the days of military dictatorship. Having just returned to Brazil from Mar-a-Lago with several in the traveling party who subsequently tested positive for coronavirus, Bolsonaro raised eyebrows further by encouraging and then participating in a pro-government rally in Brasilia on March 15. And indeed, the president himself has now been tested a second time.

Rightly or wrongly, trade is often seen as a means to promote American values in addition to reducing barriers to the flow of goods and services. Under current circumstances, it is unlikely that a Democrat-controlled Congress would support a bilateral trade agreement with a Bolsonaro-led Brazil, even if an agreement could be struck on some very complicated trade and economic issues. It’s a potent mix leading to a powerful irony: at just the time in history when Brazil finally sees it in its own self-interests to pursue closer trade and economic relations with the United States, it is the United States that may find it inconvenient to reciprocate.

Of course, there is also another consideration, which is that neither the Trump nor the Bolsonaro administrations will last forever. When both have yielded to their respective successors, in what condition will they leave the relationship between the Western Hemisphere’s two largest, strategically-important democracies? Will it be a strong, vibrant relationship built on shared values and common interests, or a transactional pairing held together tenuously by the politics of the moment? All of Latin America, and China, too, will be watching.