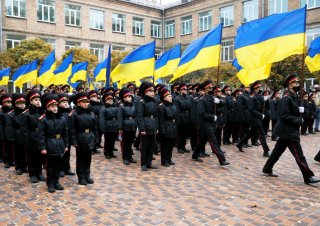 There will be no peace in Ukraine until its domestic politics are brought into conformity with its cultural reality.

Ukraine’s independence in 1991 created a nation-state whose two predominant cultural constituencies were unevenly divided between urban and rural, between wealthier and poorer regions, and between the more and less educated. The historical disbalance in favor of the Russian-speaking in each of these groups automatically made the status of the Russian language in Ukraine an issue of political contention.

Political elites from the westernmost region of Ukraine—Galicia—who before 1939 had been part of Poland, and before that of the Austro-Hungarian Empire, argued vehemently that for Ukraine to become truly independent, the use of Russian had to be restricted. State policy, they argued, should aim at creating a Ukrainian national identity based on their own Galician identity which, given the oppression of the Soviet era, was now the only authentic Ukrainian identity. In those halcyon days many Russophone Ukrainians, seeking to distance themselves from the legacy of communism, also supported a gradual Ukrainianization. As Ukraine’s first president Leonid Kravchuk explained to them in the run-up to the independence referendum, they would be “full-fledged owners” of the country, and they would always be guaranteed “preservation of full-blooded, unhindered ties with Russia and other sovereign states of the former Union.” With this understanding, they voted in large numbers for Ukrainian independence at the end of 1991.

But the vastly divergent historical memories of Eastern and Western Ukraine quickly led to mutually exclusive visions of Ukraine’s future.

In the Galician narrative, Russia is the root of all evil. The reason there is corruption in Ukraine is that Russia has imposed its slave mentality on Ukrainians; the reason the country is not more prosperous today is because of Russia’s colonial trade practices; the reason Ukrainian politics continue to be unstable is that Russia is always intervening. Since all problems point to Russia, the solution is to sever all ties with Russia.

By contrast, in the Maloross narrative, which predominates in the half of the country that lies East of the Dnieper river, Ukraine is a distinct nation with indelible cultural and religious ties to Russia. Many Maloross Ukrainians see Russian and Ukrainian ethnic identities as interchangeable and still believe, as Vladimir Zelensky did in 2014 and Vladimir Putin does today, that the two are one people. Rather than blame Russia for Ukraine’s woes, Maloross Ukrainians blame the policies of the Ukrainian government. They see the solution not in separating Ukraine from Russia, but in restoring their close ties.

For more than two decades these two regionally based competing national identities managed a tense co-existence by alternating the presidency between them and stymieing the parliament’s ability to function as an effective check. This prevented either region from achieving absolute political dominance.

Many observers say that this gridlock thwarted economic and political reform in Ukraine. This is true, but it was also Ukraine’s way of avoiding civil war, which many assumed would erupt as soon as one side gained enough control to turn its own cultural identity into a litmus test of loyalty.

This is precisely what happened in February 2014, when President Yanukovych was ousted by a revolt led and manned by Western Ukrainians up to a quarter of whom, according to surveys taken at the time, identified with the radical nationalist parties. According to Volodymyr Ishchenko, Deputy Director of the Center for Society Research (Kiev), “tolerance of the far-right against the ‘greater evil’ of Yanukovych allowed Svoboda to play the most visible role in Maidan protests and later helped to de-legitimize them for the majority of the population in southeastern Ukrainian provinces, thus forming the ground for the civil war.”

Yanukovych’s ouster was thus seen as a violation of the delicate balance that had been established between Eastern and Western Ukraine, and a direct threat to the core interest of Russophone Ukrainians. They responded by challenging his ouster on constitutional grounds. Immediately after Yanukovych’s removal, some 3,700 local elected officials from every region of the East and South (but none from the West), convened in Kharkov to condemn what they saw as an illegal coup d’état. The delegation from Crimea even called for a national assembly to come up with a new federal constitution for Ukraine.

The new government in Kiev responded by consolidating all levers of power—executive, legislative and military—in the hands of the former head of Ukrainian security forces,  Aleksandr Turchinov. The stage was thus set for a confrontation between Western Ukraine, where the overthrow of the government was seen as an expression of the people’s will, and Eastern Ukraine, where it was seen as a nationalist coup.

The same scenario was already brewing in another zone of historical conflict, Donbass, but there Russia responded very differently. When the rebels scheduled a referendum there, President Putin urged them to stand down. When rebel leaders went ahead with the vote anyway (66.8% of the total population in Donetsk supported “self-rule,” while 77.8% of the total in Lugansk supported “independence”), Russia said that while it respected the will of the people, it would not recognize the results.

Second, after conducting military exercises near the Ukrainian border in late February, Russia returned troops to their barracks in late April, after the beginning of Kiev’s anti-terrorist campaign, clearly signaling that it had no intention of involving its troops in this conflict. Finally, on June 24, just as the Ukrainian military campaign in the East was ramping up, the Russian parliament recognized Petro Poroshenko as the new president of Ukraine and rescinded Putin’s authority to use troops outside Russia.

After assuming office, Poroshenko pledged victory in the East in a matter of hours, but after his offensive suffered a catastrophic defeat at Ilovaisk at the end of August 2014 he was forced to negotiate directly with the rebels. A second disastrous defeat at Debaltsevo in February 2015 led to the Minsk peace accords which, despite persistent violations, have not been repudiated because neither side sees any realistic prospect of a military victory.

What is the end game, and why has it been so elusive?

As I said at the outset, any solution must bring Ukrainian politics into conformity with cultural reality. There are two ways to accomplish this.

The first is to create a pluricultural Ukraine in which minority communities can retain their different cultural and religious identities within the framework of a common Ukrainian civic identity. The second way is to create a culturally homogeneous Ukraine in which Russophone Ukrainians are subordinated by law, and will thus be powerless to change their status.

The pluricultural option has been rejected by the current president, and by the current majority in parliament. Thanks to the war in the East, the monocultural option has become more viable than ever before. That is because there are now six million fewer Russophone Ukrainians under Ukrainian government control than before the Maidan. This is a 28 percent reduction in the number of local voters. Furthermore, as a direct result of the local nature of the military conflict, Maloross Ukraine has lost 43 percent of its GDP, and 46 percent of its export capacity compared to 2012.  The ten Russophone regions that were once able to sway national politics in their favor, thanks to their higher levels of wealth, education, and economic productivity, are simply no longer capable of doing so.

With everything pointing toward the establishment of a monocultural Ukraine, the question now being debated in the Ukrainian media is how to treat the remaining Russophone population, which still constitutes a third of the population. Should they have the right to use Russian in public? Will they be allowed to educate their children in Russian?  Do they even form part of the indigenous population of Ukraine? A spate of legislation passed in the last few months has answered all of these questions negatively.

Prominent nationalist intellectuals have argued that Russophone Ukrainians simply need to be re-educated into a proper appreciation of their suppressed Ukrainian identity, or forced to leave. Donetsk University professor Elena Styazhkina calls this “positive, peaceful colonization.”  Others, like the Deputy Prime responsible for Reintegration of the Temporarily Occupied Territories, Alexei Reznikov, have argued for a more direct approach—expelling those who are disloyal and limiting the rights of Ukrainian citizens from those regions to participate in political life for 25 years.

I, therefore, expect the region will continue to resist until the government in Kiev gives them either meaningful autonomy or independence. As for the rest of Maloross Ukraine, it remains to be seen whether the population there will assimilate, leave the country, or remain within it as a disgruntled minority.