How Can We Prevent Nuclear War in Ukraine? 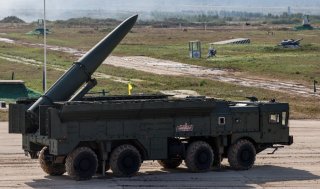 The chance that Russia will use nuclear weapons in Ukraine may be low, but it is rising. And the consequences would be devastating. That makes the current situation extremely dangerous. In fact, this may be the closest we’ve been to the use of nuclear weapons since 1962. As President Joe Biden said earlier this month, for the “first time since the Cuban missile crisis, we have a direct threat of the use [of a] nuclear weapon if in fact things continue down the path they are going." If you are not worried, you are not paying attention.

Russian president Vladimir Putin has been threatening to use nuclear weapons ever since he ordered his brutal invasion of Ukraine almost eight months ago. Since then, the Biden administration has been walking a fine line between supporting Ukraine enough to fight back against Russia, but not so much as to provoke Putin to escalate the war and “go nuclear.” So far, Biden’s balancing act has worked.

But now Russia’s war has entered a new, more dangerous phase. Ukraine’s success in pushing Russian troops back in September has forced Putin to face the fact that he is losing. But rather than admit defeat, in desperation Putin doubled down and drafted 300,000 additional troops in Russia and annexed four contested regions in southern and eastern Ukraine where he has now declared martial law. Most chilling of all, Putin said he would defend these new territories and “we will certainly make use of all weapon systems available to us. This is not a bluff.”

The United States and Ukraine have made clear that they consider Russia’s annexations as illegitimate and a “sham,” and rightly so. Ukraine, with U.S. support, will continue its military campaign to push Russia out of these regions—thereby crossing Russia’s redline for using nuclear weapons. This is a horrifying game of nuclear chicken, and there could be a head-on collision soon. We could be facing the first use of nuclear weapons in war since the United States dropped atomic bombs on Japan in 1945.

What can the Biden administration do? Less than you might think. There is no way to prevent Russia from launching a nuclear attack against Ukraine. Russia has far too many nuclear weapons in its stockpile (about 4,500) for the United States to even consider any kind of pre-emptive attack. Nor could missile defenses reliably intercept a Russian attack against the United States or Ukraine.

Therefore, U.S. officials are seeking to “deter” Putin from using nuclear weapons. Deterrence is the art of making counter threats so Putin decides for himself that a nuclear attack against Ukraine would be detrimental to his interests. Yes, you heard that right. The best we can do is try to persuade Putin not to attack. (Biden also tried to deter Putin from invading Ukraine in the first place and we saw how that went.)

Just recently, Biden’s national security advisor, Jake Sullivan, warned of “catastrophic consequences.” Secretary of State Antony Blinken warned of “horrific” consequences. Asked what he would say if Putin were considering the use of nuclear weapons, Biden said, “Don’t. Don’t. Don’t. It would change the face of war unlike anything since World War II.” Biden said the U.S. response would be “consequential” and that Russia would “become more of a pariah in the world than they ever have been. And depending on the extent of what they do will determine what response would occur.”

The current situation is highly dangerous because, deter as we might, the decision to use nukes is ultimately up to Putin, not us, and we do not know what he is thinking. “To be clear, the guy who makes that decision — I mean, it’s one man. There are no checks on Mr. Putin,” U.S. Defense Secretary Lloyd Austin told CNN. “Just as he made the irresponsible decision to invade Ukraine, he could make another decision.”

As Austin implies, deterrence works only if leaders are making rational decisions and make no mistakes. But Putin’s decision to invade Ukraine was a major miscalculation bordering on delusion. He expected Kyiv to fall quickly and for the Western response to be divided, and yet the exact opposite has happened. We cannot expect Putin to suddenly become wise when it comes to nuclear weapons. Depending on deterrence to work with Putin is taking a dangerous gamble.

Right now, deterrence is all we have, so we will roll the nuclear dice again, just as we did sixty years ago during the Cuban Missile Crisis. Back then we got lucky and avoided nuclear war. But as any gambler knows, at some point our luck will run out. As Robert McNamara put it, “The major lesson of the Cuban missile crisis is this: the indefinite combination of human fallibility and nuclear weapons will destroy nations.”

If we are fortunate enough to get out of this crisis, we need to get serious about reducing nuclear arsenals and weaning ourselves off nuclear deterrence and replacing it with something better—before it’s too late.

Tom Z. Collina is director of policy at Ploughshares Fund, a global peace and security Foundation.