How China Accidentally Turned THAAD into a Political Weapon 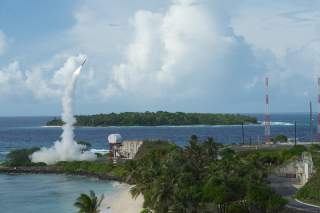 The South Korean decision to install the Terminal High Altitude Area Defense (THAAD) missile defense system has prompted a major Chinese reaction. The Chinese government has used a wide range of economic pressure against South Korea to reverse its decision. It has severely restricted tourist travel to the country, cancelled cultural events, pursued fatuous regulatory action against the company (Lotte), which sold the land to the South Korean government on which THAAD will be stationed, and, in a move worthy of the “freedom fries” of yore, staged a public bulldozing of bottles of the Korean national alcohol soju.

This effort is simultaneously ridiculous and clever, campy and serious. On the one hand, it is preposterously obvious that these “protests” are staged. Once again, the Chinese Communist Party (CCP) has demonstrated how woefully out of touch it is with modern democratic opinion. The same apparatchiks who mistake “praise” of North Korean dictator Kim Jong-un in the Onion as the real thing are those who think that a video of a bulldozer driving over soju bottles might somehow appear authentic. If China’s increasing bullying of South Korea over THAAD were not so serious, these hijinks would be comedy material. Indeed, my students here in South Korea laugh over this in discussion even as they worry about it.

On the other hand, this a wise way to pressure South Korea if the CCP is absolutely dead set against a THAAD emplacement in South Korea, which it appears to be. South Korea is a midsize economy with a few very large exporters selling to a few very large markets. This makes it highly sensitive to the politics of its biggest export markets, of which China is one. Japan, too, has been targeted in this way by China, but it is more economically diversified than South Korea and has more flexibility to ride out Chinese displeasure. China has also used these tactics in Southeast Asia.

The CCP also retains plausible deniability by routing this pressure obliquely through nongovernmental actors. There has been little overt, “Track 1” pressure, likely because Beijing is hoping South Korea will back down without an open breach. But the mercantilist-dictatorial state can “encourage” patriotic action in an economy where about 80 percent of firms have some amount of state ownership.

Countries with an open media can surely see through this charade of independent action. But in China itself, this can be marketed as the outrage of the Chinese people, rising up against encirclement by the Americans and their lackeys. And in global public opinion, there is surely enough hostility to the United States in places like Russia or the Middle East that this will sound somewhat plausible, or at least be marketed that way by anti-American elites.

Now South Korea Cannot Give In

In South Korea, the recent impeachment of conservative President Park Geun-hye has opened the door for the left to take power in the upcoming special election on May 9. The left has broadly opposed THAAD. In the wake of Park’s final approval of it last year, several opposition parliamentarians jetted off to China to express their discontent (or appease) as the conservative press howled. The likely winner on May 9, Moon Jae-in, has previously expressed skepticism over THAAD. The other left-wing candidates—there are no serious right-wing candidates given how badly the Park scandal has discredited the right—have been even more hostile.

I am very doubtful that Moon or any of the candidates, barring the least likely winner on the far left, will remove THAAD. Indeed, there is still a debate over THAAD’s technical merits. While I believe the case for THAAD is solid, and South Korean opinion generally supports it now given the sheer velocity of North Korean missile testing, there remain coherent arguments in opposition. For example, one argument is that THAAD is merely symbolic given that North Korea could use other weapons to devastate South Korea, or that the missile defense system might simply encourage North Korea to build even more missiles to overwhelm it.

But such technical issues are increasingly irrelevant. The time to debate that issue was a year or two ago. Back then, the United States and South Korea had made extensive Track 1, Track 1.5 and Track 2 outreaches to China on THAAD, to explain its capabilities and consider China’s concerns. All were rebuffed. Instead, China has dug in its heels rather deeply. It has been signaling to South Korea for more than a year not to deploy THAAD, threatening all sorts of retaliation. This has increasingly turned THAAD from a technical-functional issue of missile defense to an expression of South Korean national security sovereignty: does South Korea have the right to make national-security decisions without China’s approval? The South Korean media, even on the center and left, are increasingly framing the tussle this way.

Hence, this is the curious—but deserved—outcome for Beijing. Just as a South Korean government, which agrees with China on THAAD, is likely coming to power, Chinese bullying has painted the country into such a tight corner that a leftist president would likely retain the missile defense system. At this point, THAAD is not about THAAD anymore; it is about whether China has a veto over South Korean foreign policy. No South Korean president can assent to that.