How China and America Can Make a Serious North Korea Deal 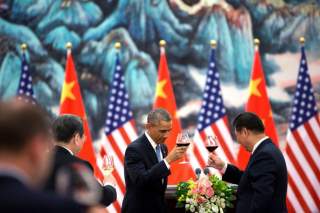 During the first presidential debate, Donald Trump stated that “China should solve that problem for us. China should go into North Korea. China is totally powerful as it relates to North Korea.” The Washington Post wondered if this means that Trump is calling for China to invade North Korea. While Trump’s suggestion for how to deal with North Korea is not more likely to be adopted than a few of his other ideas, the challenge of North Korea is real enough. In effect, there is a strong case to be made that the greatest threat to U.S. security that the new president will have to confront is that of North Korea. It may well, in the near future, possess intercontinental missiles tipped with nuclear warheads. The development of these weapons—whose maximum range may be up to six thousand miles, and thus may be capable of targeting Los Angeles—is being pursued by a country whose leader, Kim Jong-un, is notoriously bellicose and erratic.

The United States and its allies have not found a way to rein in North Korea’s accelerating nuclear program that is much more promising than Trump’s peculiar suggestion. Instead, we get political theater. Each news item about more advancements of the North Korean program is followed by statements from U.S. officials that call on Pyongyang to behave better and on the UN to pass resolutions, with requests that China help rein in Pyongyang. These hollow gestures supposedly demonstrate that our leaders did not ignore the news and are doing something, but have no discernible effect. Thus, we read that the Security Council condemned the latest missile launches as a “grave violation” of North Korea’s international obligations, which showed “flagrant disregard” for previous Council resolutions and statements and called for other member countries to “redouble their efforts.” But the United Nations left open the question of how to get tougher. David Ignatius observes that “the U.N. sanctions seem to have had no effect in curbing these provocative actions.” Other reports indicate that North Korea views efforts to tighten sanctions as “laughable” and that “it has proven adept at skirting them, thanks largely to China, its ally and biggest trading partner, which has enforced them only laxly.”

China is the only power that has the capacity to force North Korea to change course. It is North Korea’s only ally, as well as its biggest trading partner, and its largest supplier of food, weapons and energy. Hence, a common response to news that North Korea is moving more quickly than expected toward developing long-range missiles and miniaturized nuclear warheads is to “urge” China, or otherwise try to shame China into acting. Secretary of Defense Ashton Carter recently said, “China shares important responsibility for this development and has an important responsibility to reverse it.”

Governments can be shamed and are willing to make some concessions to shore up their reputations and soft power. However, there are severe limits on the extent to which one can motivate governments, in particular authoritarian regimes and rising powers such as China, to absorb the kinds of costs and challenges involved in this case, solely on the basis of Western exhortations. The costs to China if it were to move to rein in North Korea are considerable. China views living with a Communist-ruled nuclear-armed state on its border as preferable to the chaos of its collapse. Shi Yinhong, a professor of international relations at Renmin University in Beijing, explained that the “Chinese leadership is confident that North Korea will not turn its weapons on China, and that China can control its neighbor by providing enough oil to keep its economy afloat. The alternative is a strategic nightmare for Beijing: a collapsed North Korean regime, millions of refugees piling into China and a unified Korean Peninsula under an American defense treaty.”

How can the salience-based bargaining method be applied to Sino-U.S. relations? First, the United States needs to rank its interests (not necessarily publicly). As I see it, stopping additional development of the North Korean missile and nuclear program—or, better yet, rolling it back—is very high on this list for obvious reasons. The question then is: what interest is salient enough for China to assume the high costs of pressuring North Korea to cap or cut back its program? And can the United States accommodate these interests at a low cost to itself? The best approach is to ask China what it would take to ensure its cooperation. (Its initial response may well be treated as an opening bid in a negotiation, and not the final offer.) However, for the sake of this exercise, let me try to figure out what China might seek and what the United States could quite readily afford to grant.

Second, China might well be very interested in the United States committing itself not to install the Terminal High-Altitude Area Defense (THAAD) missile defense system, which is currently due to be installed in 2017 in South Korea. THAAD, the United States says, is intended to defend South Korea against North Korean missiles, and is not aimed at China. The system “does not change the strategic balance between the United States and China,” President Obama said after meeting with Xi Jinping in Hangzhou recently. But China is not persuaded. Chinese officials argue that the THAAD radar can detect Chinese missiles on the mainland, undermining its nuclear deterrent. Once North Korea’s nuclear missile program is no longer an acute threat, the United States should be quite willing not to place THAAD in South Korea.

China may well ask for more. The United States may find that it can agree to stop the almost daily reconnaissance flights up and down China’s coast lines, which China finds very troubling and which are of little value to the United States. Most of the intelligence collected in this way is of value only if one plans to attack the mainland within weeks or months. It reveals which Chinese military units are in place, who their commanders are, how they communicate and so on. However, most of these details change over time, and thus are of limited value if one believes—as most military analysts agree—that China is at least a decade away from being ready to confront the United States. China may also ask for U.S. planes to comply with the Air Defense Identification Zone (within which all planes are required to identify themselves), which China has declared it seeks to enforce over most of the South China Sea. China may have other items it considers salient that the United States does not. These are best revealed through bargaining. My purpose here is not to guess what such a bargain will look like in the end, but merely to illustrate what I mean by a bargain based on salience differentials.

Moreover, both sides may wish to add other items to the negotiations. For instance, as I see it, the second greatest concern to the United States in the region is the risk that terrorists will get their hands on nuclear weapons in Pakistan. There have already been six such attempts, and Pakistan’s nuclear arms are not well protected. China has much more leverage over Pakistan than does the United States because it is a major supplier of arms to Pakistan; in fact, over half of Pakistan’s weapons imports come from China. China also has much more substantial investments in Pakistan, possibly twenty times higher than those of the United States. What China will seek in return one can only guess, although it may well include the United States ceasing to arm countries that border China.

Those who wonder if such deals can be struck should note, for example, that the United States and China have long agreed, albeit informally, that China will not to use force to integrate Taiwan into the mainland and that the United States will not recognize Taiwan as an independent state. So far, both sides have lived up to this understanding. Granted, there is no guarantee that the United States and China can strike a salience-based deal. However, it seems worth trying and that it is a hell of a lot more promising than trying to cajole China, lecture it, or shame it into absorbing the kinds of costs and risks it would incur in order to rein in North Korea’s nuclear program.