How China Avoids War in the South China Sea 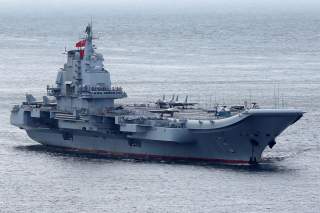 Seven East Asian nation-states are currently laying territorial claim on often overlapping areas in the South China Sea. The claims are over different portions of the sea and various small, mostly uninhabited islands. Possessing the territories is just a matter of national prestige, as the South China Sea contains an estimated 11 billion barrels of untapped oil, 190 trillion cubic feet of natural gas, and over $3 trillion worth of trade passing through annually.

China is claiming the lion’s share, through its Nine-Dash Line, a maritime demarcation line China created that encompasses almost the entirety of the South China Sea (around 85-90 percent). So far, China has built 3000 acres of new land in the South China Sea, some within disputed areas, on which it placed numerous military installations, including radars, surface-to-air missiles and paved runways capable of accommodating fighter jets.

China is currently in the process of modernization its armed forces, which is a part of the government’s national rejuvenation plan. In terms of conventional forces, China has the largest armed forces in the world in sheer manpower, with approximately twice as many active and reserve personnel than the United States. China also has nuclear capabilities, with an estimated 260 nuclear warheads. Albeit Beijing’s stockpile much smaller than that of America’s or Russia’s, it is gradually growing. For instance, U.S. intelligence estimates that of the 260 Chinese warheads, 100 of them will have long-range missile capabilities by 2020, which will have the ability to reach the United States. However, compared to the approximately 6500-7000 warheads Russia’s and America’s arsenals consist of, China’s seems rather meager.

As China’s military capabilities grow so does its confidence in dealing with neighboring countries. For example, China’s coercive tactics with the use of maritime forces in the South China Sea continue to occur. One instance of this is the Scarborough Shoal, in which China has increased its activity, following a U.S. arms sale to Taiwan in 2010. China’s officially disclosed military budget grew an average 8.5 percent every year between 2007 and 2016, and government leaders are devoted to this path of continuous increases in military spending in the future. This has worsened the already negative opinion of China among many of its East Asian neighboring countries.

Finally, in the 2018 U.S. Department of Defense’s Annual Report to Congress regarding China stated that the “United States will adapt its forces, posture, investments, and operational concepts to ensure it retains the ability to defend the homeland, deter aggression, protect our allies and partners, and preserve regional peace, prosperity, and freedom.” This report shows that the relations between Washington and Beijing are not built on mutual trust, despite high levels of trade. Moreover, the report states that the modernization of the Chinese armed forces, and the increased assertiveness and role of China outside of its immediate periphery, are factors that have increased concerns among its East Asian neighbors. Beijing’s increased focus on military capabilities are, according to the report, means to further Chinese interests farther from the Chinese mainland. This would indicate that China is concentrating on its power projection capabilities, which are vital in achieving the status of regional hegemon. This makes sense as great powers need to be able to retain and control satellite states and fully protect its sphere of influence.

Furthermore, a recent legal case between China and the Philippines resulted in the Permanent Court of Arbitration in The Hague ruling against China on all fifteen points that were laid out. Chinese claims of historic rights to the South China Sea within the Nine-Dash Line were ruled against since it was found that China had never held exclusive control over the areas the demarcation line encompasses. Under the point of “Lawfulness of Chinese Actions,” it was ruled that China had violated the sovereign rights of the Philippines. The ruling stating that:

Having found that certain areas are within the exclusive economic zone of the Philippines, the Tribunal found that China had violated the Philippines’ sovereign rights in its exclusive economic zone by (a) interfering with Philippine fishing and petroleum exploration, (b) constructing artificial islands and (c) failing to prevent Chinese fishermen from fishing in the zone. The Tribunal also held that fishermen from the Philippines (like those from China) had traditional fishing rights at Scarborough Shoal and that China had interfered with these rights in restricting access. The Tribunal further held that Chinese law enforcement vessels had unlawfully created a serious risk of collision when they physically obstructed Philippine vessels.

China’s position throughout this case has been to refuse participation in the arbitral tribunal process. On January 22, 2013, when the case began, the Philippines gave China a note verbale (a sort of diplomatic document of protest or disagreement). However, China rejected and returned the note on February 19, 2013, stating in a government white paper that the “Chinese Government has […] reiterated that it will neither accept nor participate in the arbitration thus initiated by the Philippines.”

China has been able to avoid an all-out conflict in the region by taking only small bursts of actions that are unlikely to cause any detrimental fallout from neighboring countries. This strategy of below-the-threshold expansion allows China to acquire strategic territories, since Chinese actions are calibrated to avoid full-on war, despite very negative responses from its neighbors. Russia’s President Vladimir Putin, as an exception, has expressed his support for China’s territorial claims, stating that Russia does not recognize the fact that the Court of Arbitration ruled against the Chinese claim of the Spratly Islands, nor that China has violated the sovereign rights of the Philippines by intervention.

Despite the ruling of the Permanent Court of Arbitration, the outcome ultimately is in China’s favor, as a bilateral agreement between China and the Philippines enables China to retain the artificially built islands. This is just one example of a case that highlights China’s growing confidence and influence in the region. This is arguably a long-term gain for Beijing since China has built artificial islands in the disputed areas and restricted access for Filipino fishermen and oil exploration vessels even inside the Philippines’ own exclusive economic zone.

China is likely trying to gain enough influence in the region to challenge and push out the United States completely from the South China Sea. Beijing does not try to provoke a war with its neighbors as it would be too costly and counterproductive. This is especially because the cost of a war with America and its East Asian allies would not be worth the potential territorial gains. Instead, China is operating from a rational standpoint and conducts its actions based on calculated consideration of the consequences. At the same time, it is increasingly evident that China is not interested in maintaining the pro-American current status quo in the regional balance of power.

Nicolai Fogth Gjøde Nielsen holds a master’s degree in International Relations - European Studies and a bachelor’s degree in Language and International Studies, both of which were obtained from Aalborg University in Denmark. His research primarily focuses on the foreign policies of Russia, China and the EU.