How China Can Really Help on North Korea 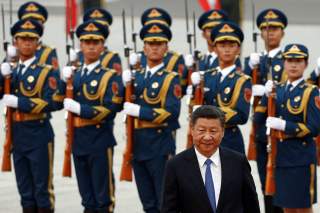 China has condemned North Korea’s latest nuclear test, one Pyongyang claims was a hydrogen bomb and which may have exceeded by five or six times the size of its last detonation, in September 2016. Yet Beijing predictably followed its condemnation with a call to return to diplomatic talks as the only way to defuse the crisis. If Xi Jinping is serious about helping curb North Korean dictator Kim Jong Un, he will drop the idea of new negotiations, and instead join the Trump Administration in a new policy of deterrence and containment.

The first step in this process is for the United States similarly to drop its long-held goal of “complete, irreversible and verifiable denuclearization,” as most recently outlined by Secretary of Defense Jim Mattis and Secretary of State Rex Tillerson, in the Wall Street Journal. The Trump administration should not make the mistake of thinking we are in 1994 or 2005, and that negotiations, no matter how unlikely, have an actual chance of succeeding.

North Korea has pursued a nuclear capability for more than a quarter-century. No negotiations, threats, or inducements have diverted it from that path. There is no reason to believe that it will suddenly abandon that dream on the doorstep of seeing it realized. Moreover, since coming to power in late-2012, Kim has dramatically increased the pace of both nuclear and ballistic missile testing. Just last week, North Korea launched what most observers believe was an intercontinental ballistic missile over Japan in yet another test of his launch capability. Combined with the successful test in July, Pyongyang may well be able to target the U.S. homeland, not to mention Hawaii and other territories in the Pacific Ocean. Kim is thus within striking distance of having both a powerful nuclear weapon and the means to deliver it.

There is still a long way to go for Pyongyang to field a fully capable nuclear arsenal. There remain questions about whether it has successfully miniaturized its nuclear packages, thus turning them into weapons. It remains equally unclear whether it has manufactured warheads that can survive re-entry into the atmosphere, let alone whether it has the guidance mechanisms to get the missile where it wants it to go.

But all of these are technical issues that sooner or later will be resolved. What is clear is that North Korea is on the threshold of being a nuclear power in fact. Thus, the U.S. position that it will never accept a nuclear North Korea refuses to recognize reality. Here is where Trump and Xi Jinping could change the dynamic of the crisis.

First, Washington should acknowledge that North Korea is a nuclear weapons-capable state, either now or at some point in the near future. Arguments that such a declaration would shred the nuclear nonproliferation regime are putting the cart before the horse; North Korea is shredding the regime, and global public opinion understands that. Acknowledging Pyongyang’s capability is by no means an endorsement of its program or a claim that it is abiding by the responsibilities of the regime.

Once that is done, China can get on board in a constructive way. Xi can announce that China no longer supports negotiations, but rather will join with the United States in deterring and containing North Korea. That means a joint policy of responding to any North Korean nuclear blackmail or use of its weapons. Given the strained relations between Beijing and Pyongyang, such a policy would actually be in China’s interests. This is the third time that North Korea has conducted a test before or during a major Chinese diplomatic event, this time during the BRICs summit in Xiamen.

Concurrent with the above two steps, Beijing and Washington could announce a strict nonproliferation initiative aimed at North Korea, to prevent it from receiving or exporting any materials that can be used to further its program. Along with this, sanctions that are punitive in nature, and not designed to lure Kim back to the negotiating table, should be jointly announced.

If China took these steps, in conjunction with a new U.S. approach, the world would enter a new era. North Korea would have nuclear weapons, but it would be well and truly isolated, as well as at risk of great power intervention should it try to use its nukes in any way, even as a bluff.

None of this is likely to happen, however. Before the world congratulates China for its condemnation of the North’s latest nuclear test, it should remember Beijing’s complicity in helping Pyongyang achieve its nuclear dream. This complicity includes repeatedly watering down or ignoring UN sanctions, while also propping up the North Korean economy  for decades (90 percent of North Korean trade is with China), either directly or by allowing numerous Chinese financial and other companies to trade with the North. Some reports indicate that China may have helped Pyongyang with its mobile launch technology, and Beijing’s firm opposition to the deployment of enhanced U.S. missile defense technology to South Korea has encouraged the North. If China gets plaudits for now being on board with tougher sanctions, it spent years helping ensure that there was no real cost to Pyongyang for its illicit activities.

Since coming to power, Kim Jong Un has moved to make himself less politically dependent on Beijing. He dramatically executed his uncle, Jang Song Taek, soon after taking control. Jang was China’s main conduit into the Kim regime, and his execution revealed the limits of Beijing’s influence in North Korea. Numerous reports that Kim has refused all requests by Xi Jinping to visit China, also indicate the lack of trust between the two sides.

Yet despite such tensions, Beijing has failed to put real pressure on Kim, at least until very recently. But China’s call for more negotiations is best seen as a tactic to preserve the status quo, whereby endless negotiations absorb all of Washington’s energy while doing nothing to actually resolve the crisis. Kim and his father before him used all previous negotiations as a respite to push forward on the nuclear and missile programs, and there is no reason to think a new round of negotiations will have any different result.

For years, observers in Asia and the United States have claimed that China “holds the keys” to solving the North Korean crisis. If so, Beijing has once again shown its disinterest in doing so. More likely, it has less influence than the world thinks, and has as few ideas for dealing with Kim as do the Americans. Nonetheless, China could help in controlling North Korea if it decided to work with an equally realistic United States to contain and deter Pyongyang. There is little reason to believe it will do so.

Michael Auslin is the Williams-Griffis Fellow in Contemporary Asia at the Hoover Institution, Stanford University, and the author of The End of the Asian Century (Yale).