How China Can Recover from Its Month of Humiliation 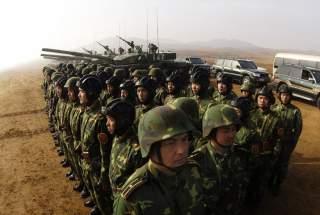 Forget April—July has shaped up to be the cruellest month in recent memory for the Chinese leadership.

Beijing is faced with a trifecta of problems. Most gut-wrenchingly, the Hague-based Permanent Court of Arbitration handed down the decision in Philippines v. China that ruled against Beijing, removing any legal basis for China’s territorial claims in the South China Sea. As a follow-up punch, South Korea agreed to the deployment of the Terminal High Altitude Area Defense (THAAD), a United States Army anti-ballistic missile system with radar penetration that weakens China’s offensive missile capabilities. Lastly, and surely agitating historical wounds, Japanese national elections gave Prime Minister Shinzo Abe’s Liberal Democratic Party (LDP) and their allies a supermajority in parliament, opening the door for Japan to expand their military capabilities.

How China chooses to weather the storm will have implications for China’s role in tomorrow’s world.

The events of July pose a threat to the reputation and legitimacy of the Chinese Communist Party, and with the economic situation at home undermining that power base, strategic losses are a bitter pill to swallow. But, despite a Chinese leadership that seems to have a winner-take-all mentality and realist perception of global politics, Beijing must realize that it is not these events alone that will dictate China’s reputation on the international stage. Instead, it will be what comes next—which narrative China chooses when viewing these outcomes, and how reputation can be safeguarded as China plans to move forward.

Narrative One: Recent Outcomes Are a Result of Chinese Behavior

The first narrative is that Beijing would view their recent behavior as the explanatory variable that has led the series of unfavorable reactions in the region. First, they would see their assertive behavior in the South China Sea as provoking its neighbors to move against Beijing; both militarily and legally. The nine-dash line, island building, the physical blocking of Filipino fishermen, and extensive environmental damage would be viewed as leaving China’s weaker neighbors with virtually no options. Evidenced by years of Manila’s attempts at negotiations with Beijing, China has essentially pushed the Philippines into The Hague. Further, China’s closed-fist diplomacy that leaves much to be desired has pushed Asian nations (both traditional U.S. allies and non-allies) to engage with the United States. The experience would serve as learning lesson for Beijing—that accommodation can not be achieved by force alone, and that smart power matters.

The much-feared deployment of THAAD on the Korean Peninsula would be viewed as the inevitable choice for Seoul to defend its citizens in the face of Beijing’s inability to “get tough” with North Korea, despite recent sanctions that have limited Pyongyang’s capabilities. South Korea’s interest in THAAD, beginning in 2013, gave Beijing a three-year window to calm Seoul’s nerves over North Korean provocations. Instead, Beijing continued to pursue their “double relationship,” most recently evidenced by North Korea’s senior envoy and former foreign minister, Ri Su-yong, being granted a private meeting with Xi Jinping. This meeting came on the heels of North Korean ballistic missile launches and an explicit message that the country would not halt their production of nuclear arms. The takeaway for Beijing is as clear as North Korea’s commitment to proliferation: support for Pyongyang can not coexist with a healthy relationship with Seoul.

China can not be pinpointed as the cause for the LDP’s stellar performance in this week’s national elections in Japan; much of that can be attributed to the widespread distrust of the Democratic Party of Japan and their failures during the 2011 earthquake and Fukushima nuclear disaster. But strong anti-Chinese public opinion in Japan over territorial disputes in the East China Sea and recent Chinese naval activity in the disputed waters surely adds legitimacy to Prime Minister Abe’s view that Japan’s defenses need a makeover. As China continues its assertive stance against Japan in the region, which has driven Japanese favorability towards China to a mere 9 percent, increasing militarization in Japan and a growing security mindset should come as no surprise. The lesson here? Using sticks results in more sticks.

The alternative narrative would view each of Beijing’s vexations as stemming from U.S. meddling in the region, a result of the wider U.S. Rebalance that seeks to contain China’s growth and maintain U.S. regional and global dominance.

The United States has irresponsibly and dangerously increased tensions in the South China Sea. Ignoring China’s nine-dash line and extensive historical claims to the region, the United States has continuously conducted illegal naval and aerial navigation exercises over and through Chinese sovereign territory. As a natural reaction to protects its people and safeguard against foreign agitation, Beijing has constructed islands in the Chinese region for both civil and military purposes—all within the rights of the Party. In an attempt to influence China’s neighbors that have concerns over China’s rise, the United States has manipulated regional actors and sparked an arms race, as well as providing guidance for the Philippines to open an illegitimate case against China in the The Hague. The United States, a country that has conveniently not ratified the United Nations Convention on the Law of the Sea, has manipulated the process of the court. Because of this, China can not, and must not, recognize the court’s decision.

The deployment of THAAD on the Korean Peninsula is carefully marketed by Washington as a missile defense system against the North Korean threat. But, in line with the Rebalance approach and increasing U.S. concerns about China, the system allows for wider radar penetration that inhibits China’s offensive missile capabilities — the true aim of the U.S. Army’s system. Given the existence of a wide variety of weapons systems and deterrence methods already in the region, the deployment of the missile battery would add minimal benefits towards deterring the DPRK.

The marks of Washington can be also be found all over Japan. As a longtime security partner, the United States is counting on Japan to play a large role in its containment policy. With this goal in mind, Washington has given the Abe administration the go-ahead to pursue military growth.

These narratives are important when analyzing China’s foreign policy. What may seem like direct causality may actually be quite different than what a foreign government and its people are viewing as cause and effect.

Beijing would be wise to empathize with both narratives. In China, reputation matters. And a complete adoption of the first narrative would result in domestic backlash. The inability of the Chinese Communist Party to “stand up” to foreign subjugators would not only spell out a failure for Xi’s aims of Chinese preeminence in the region, but a direct threat to the CCP’s overall legitimacy. Alternatively, an embracing of the second narrative would be equally damaging to China and the region. A failure to recognize fault and the reality that actions spawn reactions, as well as growing anti-American sentiment in China, would lead to further aggressive Chinese behavior. China would rebuff the PCA ruling, undermining international law and pressing forward with its assertive stance in the region. Chilling relations between Beijing and Seoul over THAAD may result in China “doubling down” on their relationship with the DPRK, increasing tensions on the peninsula and a further proliferation of nuclear weapons. Lastly, growing skepticism and fears of Japan’s future would heighten tensions in the East China Sea. Any conflict there would challenge, and perhaps activate, the U.S. security commitment to Japan.

China is at a critical crossroads in its trajectory towards becoming a great power, and being able to navigate through that path will increasingly depend on the CCP’s ability to engage with various narratives. If accomplished, their reputation will advance beyond just regional hegemony, but towards becoming a legitimate great power and responsible stakeholder.

Brian R. Moore is a Resident Fellow at Pacific Forum CSIS and a graduate student at Georgetown’s School of Foreign Service in the Asian Studies program. He tweets at @thebrmoore.