How China Is Continuing to Muzzle Hong Kong 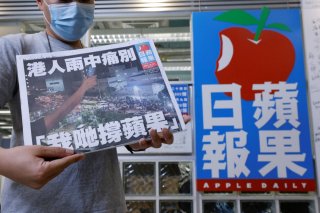 The approaching date of July 21 will be a day for great celebration within the People’s Republic of China: the one-hundredth anniversary of the founding of the Chinese Communist Party (CCP). In the weeks leading up to the event, Chinese state media and other apparatuses have looked to highlight the party’s major feats and accomplishments with particular focus on those taking place under the helm of current CCP General Secretary Xi Jinping. Nearing one decade in power, Xi has purged rivals, centralized decision-making, and attempted to crush any form of open dissent. To this end, the month of July will also mark another ominous anniversary: one year since the implementation of the Hong Kong National Security Law.

While many expected, or at least hoped, that Xi would allow the former British colony to maintain its semi-autonomous framework given its importance to both Chinese and global financial systems, the eruption of citywide protests in 2019 quickly changed calculations. While the outbreak of the coronavirus pandemic and memories of 2003’s SARS epidemic kept Hong Kongers off the streets temporarily, the CCP was likely well aware that the city’s populous was prepared to continue making their demands for freedom and democracy.

In response, in the spring of 2020, China’s rubberstamp National People’s Congress bypassed Hong Kong’s own legislative body and directly implemented its own Hong Kong National Security Law (NSL) to take effect just prior to midnight on July 1, 2020 (the twenty-third anniversary of Hong Kong’s return to Chinese sovereignty).

The results have been chilling.

The draconian law vaguely outlines crimes and offenses such “subversion,” “secession,” and “collusion with foreign forces” with those sentenced facing upwards of life imprisonment. When questioned as to more clear parameters on what these terms may suggest, Hong Kong officials have been unwilling to respond, and instead opted for an “arrest now, ask questions later” style purge.

By May of this year, over one hundred individuals had already been arrested under the NSL, including a one day sweep on January 6 of fifty-five legislators and activists, who Hong Kong police allege may have committed subversion stemming from an election primary of pro-democracy candidates that brought out over 600,000 voters the previous July.

Of particular ire to officials in both Hong Kong and Beijing has been media tycoon Jimmy Lai. Lai, seventy-three, is an outspoken critic of the CCP and the founder of Apple Daily, the city’s most prominent pro-democracy newspaper. Throughout 2019 Lai vocally championed the protest movement, and met with top U.S. officials including former Vice President Mike Pence and former Secretary of State Mike Pompeo to discuss the city’s evolving state of affairs. The perceived open courting of U.S. support enraged Chinese officials who have since used the meetings to justify accusations of “foreign collusion,” one of the various charges levied against Lai under the NSL, who has remained imprisoned for much of the past year.

The assault on Hong Kongers’ freedoms has not stopped there. Just this past month Hong Kong Police raided the headquarters of Apple Daily for the second time in less than a year, arresting company executives and seizing over $2 million in assets. Under near-constant persecution and now lacking the funds necessary to continue normal procedures, on June 23 the paper announced it would ultimately cease operations by the end of the week. With this latest assault on free press, journalists from even major foreign outlets and publications have been left wondering what is and is not allowed under the NSL, and whether even sharing second-hand quotes and slogans could be grounds for potential future arrest.

Congress should act quickly to pass bipartisan legislation such as the 2021 Hong Kong Safe Harbor Act to ease the pathway for Hong Kongers to immigrate to the United States under special refugee status. Following the recent UK announcement of expanding opportunities for Hong Kongers to emigrate under the long-standing British National (Overseas) scheme, Chinese officials have accused the move of being an infringement on their national sovereignty and threatened further response. For many in Hong Kong, time and options may be running out.

Additionally, the United States should continue to utilize the Global Magnitsky Human Rights Accountability Act of 2016 and other sanctioning mechanisms to punish Hong Kong and Chinese officials who are crippling the city’s freedoms. Even if sanctions may have a minimal effect on government and police officials who lack major overseas assets, it can still send a strong message that the United States will not tolerate the continued repression.

Finally, the United States should look to further utilize its outsized presence within global financial markets to ensure that international firms, particularly American ones, are not complicit in the CCP’s oppression and tyranny. Previous steps by the U.S. Treasury Department to hold financial firms in check on sanctions should be reviewed and expanded where necessary to continue raising the costs on both Chinese and Hong Kong officials for their actions.

Once a vibrant international outpost deemed “Asia’s World City,” Hong Kong is now a shell of its former self.

Despite the CCP’s claims, many Hong Kongers did not take to the streets to strive for secession or independence, but merely as a call to enjoy the freedoms they were promised, and for their voices to be heard. The United States would be lucky to have them.

Joe Bauer is a graduate student in International Economics and China Studies at the Johns Hopkins University School of Advanced International Studies in Washington, D.C.