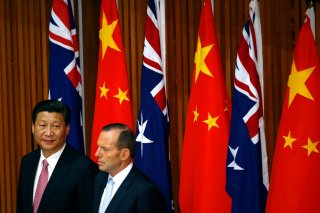 One needs to live in Australia to appreciate the constant barrage of national insults and economic threats which began in late 2019 and are ongoing. Importantly, these were not just issued by Chinese state media outlets but by high-ranking Chinese officials in Beijing and Canberra. An extraordinary decision by Beijing was made in November 2020 when its embassy publicly issued a dossier of Fourteen Grievances against Australian government policy as explanation for the poor relations and justification for the economic punishments against Australia. These include predictable complaints such as Australia’s overt criticism of Chinese policies regarding the South China Sea, Hong Kong, Taiwan, and Xinjiang. But most concerned domestic policies and legislation, such as laws passed to prohibit foreign interference in domestic institutions. The dossier also included Australia’s refusal to endorse the Belt and Road Initiative, decisions to ban certain foreign investments and acquisitions by Chinese entities, banning Huawei and ZTE from the Australian 5G network, funding think-tanks critical of the Communist Party, and the Scott Morrison government calling for an international inquiry into the origins of covid-19.

Although no one is surprised that Beijing is critical of these Australian policies, it is unprecedented for the Communist Party to abandon all cover of deniability and confirm that political decisions made by the Communist Party are responsible for the economic punishments on countries. Additionally, the fact that most grievances pertained to domestic rather than foreign policy demolished arguments still making the rounds in Australian and regional debates that repairing the bilateral relationship requires only that China be respected, left to tend to its own internal affairs without suffering opprobrium, and given the strategic space in its periphery owed to all great powers. As the dossier confirms, economic coercion is at the heart of Chinese statecraft and Beijing is punishing Australia for the latter refusing to give the former a right to directly shape or else veto governmental policy that affects Chinese interests, even if that policy is fundamentally domestic in nature.

TO PLACE Australia’s current plight in a broader geopolitical and strategic context of relevance to America and its evolving Indo-Pacific Strategy, one must further explain why China is singling out Australia for unique treatment given relations are also souring with other democracies.

It is widely known and understood that an important element of Beijing’s grand strategy is to dilute the effectiveness and credibility of American alliances and security partnerships in the region. Doing so reduces America’s capacity to maintain its regional strategic presence and influence, which will then make it much easier for Beijing to compel increasingly anxious and insecure states to accept a more subservient position vis-à-vis China. This is the setting within which China has expended considerable efforts and resources since early this century to groom and seduce Australia—a formal treaty ally and member of the Five Eyes intelligence network.

Indeed, the signing and ratification of the 2015 China-Australia Free Trade Agreement remain the most comprehensive economic agreement China has signed with any advanced economy. It is arguable that the innocuously sounding United Front Work Department (UFWD), a vast and well-resourced entity whose purpose it is to build the Community Party’s legitimacy at home and incentivize Chinese diasporas in other countries to advance Beijing’s interests, is more active in Australia than in any other allied nation. Communist Party entities have invested considerable amounts in Australian media assets to produce content sympathetic to Communist Party objectives. The purposes behind these and other activities are to create permanent and powerful entities within Australia who can be relied upon to advocate for Chinese interests. All this was accompanied by Beijing’s relentless promotion of the narrative that China’s rise and America’s decline is inevitable, the People’s Liberation Army is undeterrable and will pay any price to achieve its objectives, and China was issuing a special and never to be repeated offer for Australia to strike a fair but accommodationist bargain with its largest trading partner before it is too late.

This goes some way to account for Chinese rage in that the considerable sunk costs of the Australia project did not result in the country’s Finlandization. Contrary to these expectations, Canberra has become a serious thorn in the side for Beijing. For example, Australia was the first country in the world to formally ban Chinese firms from its 5G infrastructure and to properly confront the growing menace of UFWD activities through passing legislation prohibiting interference and the exercise of covert influence by foreign entities. Canberra’s willingness to engage the nation in a public conversation about UFWD activities was especially infuriating for Beijing. Doing that involved shining a light on the insidious nature of Communist Party intentions to a national and global audience. It embarrassed the Communist Party by lifting the veil on a vast and global intelligence operation involving the co-opting of Chinese diasporas around the world.

To Beijing’s further dismay, these Australian actions have encouraged North American, European, and Asian democracies to consider similar policies. It is why the Chinese Embassy’s Fourteen Grievances and editorials in state-owned publications continually decry Australia for being an “upstart,” “ungrateful,” and becoming the “leader of the pack” in spreading anti-Chinese policies and sentiment.

Additionally, Australian strategy is refusing to stand still or remain on the sidelines as China continues to expand its military and political presence and menace beyond its immediate periphery. Its 2017 Foreign Policy White Paper expressed a desire to work with other democracies to achieve a favorable balance of power. The 2020 Defence Strategic Update and 2020 Force Structure Plan committed Australia to help shape the strategic environment, deter potential enemies, and respond to important threats. Importantly, these documents pledged significant resources to develop military assets such as long-range and hypersonic missiles, unmanned vehicles, and offensive cyber capabilities in addressing unnamed state-based threats. It is an open secret that it is almost all aimed against China.

Beijing is also aware that this is about more than Australia making a defiant stand against the odds. It is about increasing Australia’s role and ability to work with America and others to achieve an effective check against China in all forms: from the military balance to blunting the geostrategic aims of the Belt and Road Initiative, from creating resilient and secure supply chains that do not depend on China for critical and strategic sectors to elevating groupings that can promote agreement between democracies such as the Quadrilateral Security Dialogue and Five Eyes intelligence network.

CHINESE ECONOMIC punishment of Australia is increasingly driven by rage and resentment. But it is also pernicious statecraft for a Communist Party able to force domestic institutions, media, firms, and citizens to respond to its demands. The point of economic coercion is not to cripple the entire Australian economy, as this is beyond the powers of the Communist Party, but to heighten national anxiety and encourage political, business, and community entities and prominent individuals to criticize the government’s management of relations with China. The ultimate objective, as the Fourteen Grievances makes clear, is to compel the government to change its policies.

The brutal nature of international politics suggests that the proverbial David rarely prevails over Goliath. Yet, the Australian case study should warm American hearts. There is a strong case that China has overreached and that smaller but successful democracies have far more agency and options than is widely appreciated.

First, the national conversation about the menace of the Chinese Communist Party in the region and on Australian soil did not frighten the country into submission. On the contrary, it has convinced growing numbers of political, business, and community stakeholders that the cost of doing nothing and allowing the Chinese Communist Party free rein is too great. This is evident in all surveys and anecdotal encounters with Australians who are increasingly critical of Beijing. This increases Australian political and psychological preparedness to absorb pain and disruption, making it harder for Beijing to achieve its objectives through economic coercion.

Second, necessity is the mother of invention. The imposition of economic punishments has forced Australia to reassess its economic relationships and markets—something which might have occurred naturally but over many years and decades. The Chinese restrictions and bans are fast-tracking the exploration of alternative markets and economic partners, including with largely untapped economies such as India and older partners such as the United Kingdom and the European Union. It may be that the Chinese market was a once-in-a-lifetime boon for the local economy. But Australian businesses are more serious about looking to other markets than has been the case for the past three decades. Events have given a shot in the arm to hitherto drifting national conversations about necessary reforms to invigorate manufacturing and the development of new technologies.

Nor is this all. Chinese actions are forcing the country to give greater thought to reimagining economic globalization. This includes the importance of secure supply chains and greater emphasis on the importance of trust between economic partners—which will only tend to occur when they have similar interests and institutions. This is leading to better alignment between strategic and economic interests. All are part of a broader conversation about national economic resilience which was long overdue. Other democracies are thinking about similar issues but the economic pressure being heaped on Australia is causing the latter to think and act more rapidly.