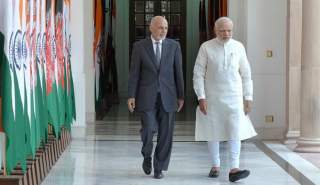 Modi’s Bangladesh outreach is part of a broader strategy of “SAARC-minus-one,” aimed at integrating members of the South Asian Association for Regional Cooperation (SAARC), except for Pakistan. Similarly, as part of its “Look East” policy, New Delhi plans a more assertive Asia-Pacific strategy, aimed at countering China by strengthening relationships with countries such as Australia, Japan, and South Korea, which fear Chinese hegemony.

But as India looks east, it is losing influence to its west to China and Pakistan. India’s inability to consolidate space in South Asia should induce greater caution in assessments of its rise as a global power given its inability to establish dominance in its periphery.

India has experienced a flurry of setbacks to its west as of late.

One, New Delhi has lost influence in Afghanistan, where President Ashraf Ghani has tilted his government toward Pakistan and China, as part of a bid to secure peace in his country. After coming into office last fall, Ghani’s first foreign visits were to Saudi Arabia, China, and Pakistan. His first presidential trip to India took place this April, after he suspended an arms deal with New Delhi.

Ghani has made a concerted effort to ease the shadow war between his country’s intelligence service, the National Directorate of Security (NDS) and Pakistan’s Inter-Services Intelligence (ISI). The NDS has backed away from its support for Pakistani Taliban (TTP) factions that engage in terrorism in Pakistan. A reduced footprint for Indian intelligence in Afghanistan could be on the cards as well. An ISI-NDS agreement, reported either as in the draft or final stages, has been the source of controversy in Afghanistan, but Kabul and Islamabad are likely to weather the storm and continue nurturing their bilateral relationship.

Ghani has also expanded outreach to the Afghan Taliban, through the facilitation of not just Pakistan, but also China. In recent months, the Kabul government has engaged in talks with the Afghan Taliban or elements connected to it; and Beijing has either played the role of observer or host in these parlays.

In the midst of the U.S. surge in Afghanistan, Indian and pro-India commentators called for the soft partition of Afghanistan and revival of the Northern Alliance it had backed in the 1990s. Those plans have fallen flat, despite India’s development assistance to Afghanistan. India is a non-entity in the Taliban talks and its influence in Afghanistan—achieved through riding on the coattails of a now modest US and NATO military presence—is on the wane. This reduction is translating even on the economic side; an Indian consortium has essentially backed out of a $10 billion mining deal in Afghanistan.

Two, India has been unable to leverage uncertainty in the region to secure Iranian partnership against Pakistan. In the 1990s, New Delhi and Tehran supported the Northern Alliance against the Pakistan-backed Taliban in Afghanistan. But both Tehran and the Afghan Taliban view one another in more pragmatic terms these days. The Iranian government has hosted the Afghan Taliban on multiple occasions, including last month.

And despite regional sectarian turmoil, Iran-Pakistan relations are surprisingly stable, if not improving. Pakistan wisely chose not to join the Saudi-led Yemen war. And Islamabad and Tehran continue talks over energy, trade, and security cooperation despite periodic insurgent violence along their shared border.

The current government in Islamabad, generally seen as pro-Saudi, has moved away from its initial coolness toward a gas pipeline with Tehran. China will construct much of the Pakistani portion of the pipeline. Tehran has even expressed interest in expanding the pipeline to China. Meanwhile, India—which was originally a member of the pipeline project, but backed out in part to deny Pakistan transit royalties—has dropped plans for an undersea pipeline bringing in Iranian gas from Oman. The expensive undersea pipeline was conceived to circumvent Pakistan, but a UN decision to expand Pakistan’s seabed territory has made the pipeline impossible without Islamabad’s involvement.

Three, China is pushing forward with a $46 billion economic corridor linking its underdeveloped and landlocked western frontier with the Arabian Sea and Persian Gulf shipping lanes through Pakistan. The Chinese-built Arabian Sea port of Gwadar is already operational, but lacks dedicated road connectivity to central Pakistan. But by 2017, Gwadar will be connected to China with the completion of the M-8 motorway and rehabilitation and upgrading of the Karakoram Highway. The China-Pakistan Economic Corridor (CPEC) promises to change the economic geography of the region, driving the next generation of growth in Pakistan and western China. CPEC, especially the Gwadar port, will also contribute to the strategic maritime depth of both China and Pakistan. Meanwhile, the nearby Iranian port of Chabahar, developed by India as a competitor to Gwadar, is at least a year from being operational and has only one crane to move containers.

Indian attempts to obstruct CPEC have and will continue fall flat. Modi reportedly described CPEC as “unacceptable” to Chinese officials, because it crosses through Pakistan’s Gilgit-Baltistan region, which India claims. But India’s veto power over development projects in Azad Kashmir and Gilgit-Baltistan is eroding. The Asian Development Bank will fund the construction of a dam in the Kotli district of Azad Kashmir; and a consortium might fund the Diamer-Bhasha dam in Gilgit-Baltistan.

Successful elections in Gilgit-Baltistan this week indicate that Pakistan is moving forward with normalizing the region, which lacks provincial status. Pakistani officials have pointed toward an Indian hand in terrorism along the planned CPEC route; but on the whole, Indian-backed militancy in Pakistan is on the wane, thanks in part to Pakistani military operations in Karachi and Balochistan, and a change in leadership and the foreign presence in Afghanistan. Meanwhile, protests grow in Indian-controlled Jammu and Kashmir, not just by Muslim separatists, but also by Sikhs, indicating that locals will resist the hardline policies planned by Hindu nationalists in the new coalition government there.

For most of the past decade, Pakistan has been hammered by political instability, terrorism, and economic decline. In India, Pakistan’s troubles have resulted in a distorted perception of New Delhi’s capacity to project power in the region.

But Pakistan is now taking a turn for the better. Deaths from terrorism are at their lowest rate since 2007 and continue to drop. The Pakistani economy has been stabilized and is primed for a take off. The civilian and military leadership are largely on the same page on major issues, resulting in political stability that shows signs of endurance. A second consecutive transition of power from one democratically elected government to another in 2018 looks reasonably likely. And while the Pakistani military remains committed to long-term counterinsurgency operations in the border regions with Afghanistan, it is now inching toward a resumption of its military modernization program.

Alongside its internal reform, Pakistan, aided by China, is engaging in a smarter, more effective approach toward the region, reflected in the aforementioned gains. But India’s evolving, more strident, strategic culture has resulted in a false sense of confidence among its strategic planners. If this does not reverse, they will be in for a big surprise. In South Asia, Islamabad and Beijing are going to give New Delhi a run for its money.