How China Plans to Leverage Its Relationship with Japan 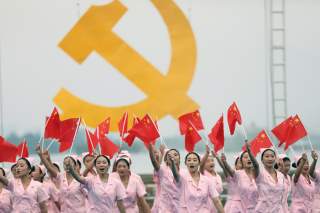 Sino-Japanese relations have enjoy a relative lull in their complicated relationship over the past six months. In September 2017, Prime Minister Abe paid a surprise visit to the Chinese Embassy in Tokyo marking China’s upcoming National Day as well as the forty-fifth anniversary of the normalization of Japan-China relations at the Chinese Embassy. We have seen Abe express open interest in President Xi’s signature initiative, the Belt Road Initiative (BRI). Furthermore, Abe has voiced numerous positive statements conveying Japan’s interests in building a future-oriented relationship with Beijing. The de-escalation in the relationship’s downward spiral was also signaled by a low-key commemoration ceremony for the Nanjing Massacre in December 2017 in which President Xi did not speak.

While the warming of relations should be applauded and supported by the region and the world at large, this push towards a Sino-Japanese détente should be understood through the lens of domestic politics, reform and increasingly turbulent geopolitics within the region and globally. At the same time, we should have a sober appraisal about the fundamental challenges in the bilateral relationship but also how an intensifying Sino-U.S. rivalry will make it difficult for Beijing and Tokyo to transform the dynamics of their relation.

Prioritization of Risks for Beijing: North Korea and the United States

The Trump presidency and its efforts to denuclearize North Korea have been identified as Beijing’s two biggest risk factors for continued socioeconomic development to achieve President Xi’s China Dream, the great rejuvenation of the Chinese nation and people. The North Korean issue has the potential to bring conflict to the region disrupting trade and regional stability, key precursors for China to maintain is socio-economic development. On the other hand, the Trump administration—if not treated with prudence and careful diplomacy—has the potential to push Sino-U.S. relations into a downward negative spiral that could manifest itself as Thucydides trap. As a result, leaders in Zhongnanhai have decided that they must improve relations with both Japan and South Korea, so they can concentrate their diplomatic efforts on Sino-U.S. relations and North Korea.

Leaders in Beijing seem to have recognized that their informal embargo against South Korea in 2017 to push back against the THAAD installment resulted in increased anti-Chinese sentiment and deepening relations with the United States. They also recognize that the anti-Japanese policy from 2012–2017 has not brought them the diplomatic results they wished.

Rather than maneuvering Tokyo into Beijing’s sphere of influence, regular incursions into the East China Sea (ECS) and anti-Japanese protests have concerns in Japan over China’s long term objectives for the region and caused a shift in Japanese trade and investment in Mainland China. Importantly, it has energized and consolidated Japan’s commitment to strengthening its economy, political influence and security capabilities.

Beijing understands that Abe is not going away anytime soon because of Abe’s political stability, successful economic and diplomatic policies and longevity in office (potentially to 2021). With that, they feel that they must form a more productive relationship.

Tokyo’s Cautious Engagement: History and Economy as Barrier and Bridge

On the Japanese side, Abe has consistently been open about the economic opportunities that a warm Sino-Japanese relationship would have and as a result he has made significant efforts to bridge the relationship. On matters of history for example, the Cabinet Statement on August 14, 2015, highlighted Japan’s role in bringing great harm and indignity to countries in the region. The Kitaoka Commission “On the History of the 20th Century and on Japan’s Role and the World Order in the 21st Century” also recognized this. Abe has also recognized the positive opportunities of President Xi’s signature foreign policy, the BRI and has expressed interest in joining it.

Functional Not Transformative Turn in Relations

Based on the above facts, rather than Sino-Japanese relations improving because a fundamental transformation in their relationship as we saw in the Franco-German relationship, the relationship is returning to being functional and cooperative in areas that are not contentious. In this sense, a return to the Seikei Bunri (政経分離）style of relations in which politics and economics are separated is superficially taking place. Progress on issues such as history, the Senkakus/Daioyutai islands in the East China Sea (ECS), and different views about the sovereign claims in the South China Sea are being deprioritized for now.

The ideal scenario is that both countries return to the Tanage (shelve) approach to dealing with the ECS Senkaku/Daioyutai issue in which leaders in both countries decided to let “wiser” future generations find a solution to the dispute of sovereignty over these contentious islands. This does not appear to be the trajectory of the issue over the past five years and going forward.

Rather than military conflict, China is engaging in as long-term strategy to delegitimize Japan’s legal basis for sovereignty over the islands. It is doing this through a so-called salami-slicing strategy of disproving Japan’s effective control over the island. This is being accomplished by the air defense identification zone (ADIZ), which includes the Senkaku/ Daioyutai islands. Here, planes must report their entry through the Chinese ADIZ, which demonstrates that the Chinese have effective management of the region.

The continued insertion of civilian vessels in the seas around the islands similarly demonstrates that Japan has no effective control of the islands. In the long term, the combination of the civilian vessels and ADIZ examples of Chinese control erodes away Japan’s legal claim.

For China, it can continue a dual path of engagement with Japan through economic cooperation and other forms of functional cooperation while at the same time erode away Japan’s legal claim over the Senkaku/Daioyutai Islands. Japan understands this but has not been able to conceive of a counter strategy to consolidate its claims.

Prime Minister Abe has consistently demonstrated a track record as a pragmatist. Improving relations with China has several dimensions. First, there is no solution to the North Korean nuclear quandary without Chinese leadership and cooperation. Warming Sino-Japanese relations may encourage China to put more pressure on Pyongyang. This could amount to fully committing to sanctions against the North or even regime replacement in which a more compliant and less belligerent Pyongyang denuclearizes in exchange for economic aid and a commitment by China (and other countries) to maintain the North’s security.

Second, Abenomics requires access to markets in an era where Japan’s demographics challenges mean that there are less and less consumers to drive economic growth. Frigid Sino-Japanese relations would not contribute to growing the Japanese economy. Participation in the BRI would be a boon to Japanese corporations and would contribute to Abenomics success and bilateral relations in general. By not joining or at least keeping the doors open to the BRI for Japanese corporations, Abe may even face a political backlash by his corporate supporters eroding away his political support base.

Third, without warming relations with Beijing it will be difficult to deal with bilateral issues such as the ECS Senkaku/Diaoyutai issue, which could spiral out of control as we saw in 2012 when the Noda administration Nationalized the Senkaku Islands. At a regional level, warming Sino-Japanese relations are also necessary to find ways to manage the South China Sea conundrum, anti-piracy, transnational diseases and other issues that could destabilize the region.

The 19th Party Congress in October 2017 has consolidated President Xi’s position as the core leader in China. He now has great latitude to engage in foreign policy that he feels will contribute to achieving the China Dream, the great rejuvenation of the Chinese nation and people. To do that China must have regional stability. Warming relations with Japan contributes to that stability by allowing China to trade with Japan and to continue to enjoy technological exchanges with Japan. At the same time, making the Sino-Japanese economic relationship denser, more expensive and more lucrative for the Japan has the effect of increasing Beijing’s economic leverage over Japan in the cases where there are political disagreements. In this sense, President Xi sees warming relations as a way to achieve the China Dream while at the same time move Japan more deeply into China’s economic orbit.

Dr. Stephen Nagy is a senior associate professor at the International Christian University in Tokyo, Japan, and a distinguished fellow at the Asia Pacific Foundation in Canada.