How China Sees America's Moves in Asia: Worse Than Containment 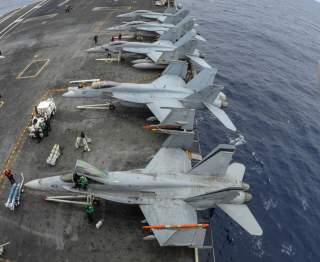 As President Obama prepares to embark once more on a trip to the Middle Kingdom, it will be worthwhile to reflect on the condition of this all-important bilateral relationship. Specialists and senior diplomats are fond of discussing the tremendous breadth of U.S.-Chinese interactions, most of which are not in the military sphere and are generally positive. This is, needless to say, the most massive trading relationship on the globe, after all. Then, there are American NBA teams playing exhibition games in China and getting plenty of attention from an adoring Chinese fan base. Less glamorous, but likely of much greater significance is the very extensive set of scientific collaborations that has been initiated in the domain of green energy.

And yet, we should all be amply disturbed by the obviously unstable military competition now coming into full view in U.S.-Chinese relations. It’s all well and good to describe the relations as having cooperative and competitive dynamics—akin to a couple of scrappy boys on the playground, right? Wrong. As these two “chums” are playing the “game” of geopolitics, one of them could easily brandish a switch-blade with untold consequences for international security. As the Ukraine crisis starkly revealed earlier this year, international politics is not a playground.

Putting U.S.-Chinese relations on a stronger foundation—a conspicuous failure of the current administration’s foreign policy—will require a more thorough understanding of Chinese strategy and especially perceptions. This is not a matter of more dialogue, or of closely reading China’s defense white paper. Nor is the anodyne and ambiguous terminology employed by diplomats particularly helpful. Understanding the perceptions of Chinese national-security elites requires a frequent “look under the hood” of U.S.-Chinese relations.

Here, a single, representative Chinese academic article is discussed in detail for its utility in gauging the state of contemporary U.S.-Chinese relations. The article entitled “On the U.S. Restriction of Chinese Sea Power in the Post-Cold War Era” was published as the lead article in the summer 2014 edition of the journal 东北亚论坛 [Northeast Asia Forum]. This is hardly China’s most significant foreign-policy publication, and its authors cannot be counted among Beijing’s foreign-policy elite.

And yet that may suggest its potential to cut through the cloud of opaque argumentation that often envelops the Chinese capital. Two of the three writers are from prominent military academies (army and air force), while the third is a researcher at the prestigious Zhejiang University. As the lead article in the journal, it must be assumed that the editorial staff regarded the article as innovative and significant, suggesting even that these authors could be representative of China’s future national-security decision makers.

The authors argue that the United States has become the most significant factor restricting the further development of Chinese sea power. They explain that sea power is at the core of American grand strategy and that China’s rapid rise is perceived in Washington to threaten the U.S. position of hegemonic leadership in the Western Pacific. These perceptions have given rise to “doubts and wariness” regarding China’s naval development.

For these authors, China does not just confront “遏制” [containment] by the United States, but something perhaps even more bellicose: “围堵”[a condition of being under siege] or even “掣肘”[a condition of being held by the elbows]. For the purpose of restricting Chinese naval power in the eastern, southern and western flanks, Washington is said to be constructing a “超长防线”[super long line of defense] that stretches from the Aleutian Islands to the Persian Gulf.

As noted above, this analysis puts a focus on three different vectors of U.S. activity. In the South China Sea, it is observed that over the last few years, the United States has begun to “directly contain” Chinese sea-power development. In that regard, the recent deployment of the new littoral combat ship (LCS) to Singapore is seen as deliberately aimed at countering China. These analysts outline the importance of Washington’s so-called “双锚”[dual anchor] strategy that seeks to facilitate enhanced military cooperation between Australia and Japan. Another vector of U.S. strategy, according to this analysis, concerns Taiwan. The island is said to form a critical strategic linkage to the South China Sea and its role in U.S. strategy is said to be increasing.

The final vector of U.S. policy is said to concern the Indian Ocean and involves an effort by Washington to strengthen the Indian armed forces. The idea, according to these Chinese analysts, is to use the India-China territorial dispute on land to “牵制 ” [pin down] China by diverting its attention away from the maritime flank. The authors assert that China faces an immense challenge to develop as a “陆海复合型国家” [hybrid land-sea power]. They note that many great powers—including France, Germany and the Soviet Union—faced similar challenges as hybrid powers, and each ultimately met defeat.

Another interesting part of the article examines how China should respond to alleged U.S. efforts to contain the development of Chinese sea power. Owing to historical reasons and resource limitations, China’s fleet is said to have been excessively reliant on submarines and small surface ships, neglecting large combatants. A more balanced fleet, employing aircraft carriers, will be capable of “突破” [breaking through] American restrictions on Chinese sea power to “uphold Asia-Pacific maritime strategic stability.” To American readers, of course, these two goals will seem to be in direct contradiction, but this bald Chinese assertion just illustrates the glaringly deep chasm that separates strategic perceptions across the Pacific. It is also interesting, moreover, that none of the authors are from the Chinese Navy—one is a civilian, one is from the Chinese Army and one is from the Chinese Air Force. Apparently, navalism has gone mainstream in China—not necessarily a positive sign for the future of security in the Asia-Pacific. If there is one ray of sunlight in this otherwise dark discussion, it is a brief suggestion that China must provide the Asia-Pacific with “maritime public goods,” to enhance regional stability and also to allay American doubts. But the overall tone is overwhelmingly pessimistic.

Two other points are noteworthy in this article from the vantage point of military strategy. First, the authors’ rather candid appraisal notes that the Chinese Navy remains significantly weak in anti-submarine warfare (ASW). Increasing the Chinese Navy’s proficiency at ASW is said to be “迫在眉睫” [extremely urgent]. However, they go on to observe that submarines have almost no answer to aerial attack, so the implication seems to be that China will double down on vectoring substantial, if unrealized, air-power potential (to include patrol aircraft, carrier aviation, helicopters and UAVs) against the perceived grave submarine threat. On a military subject of potentially even greater importance, these authors assert that Chinese nuclear forces are far too small at present. The nuclear balance, they argue, is an essential pillar of stability in the Asia-Pacific region, and they strongly argue in favor of further enhancing China’s sea-based deterrent.

This article may serve as evidence of the pervasiveness of a rivalry mentality in Chinese strategic discourse. There is hardly a whiff of optimism, such as references to “new type great power relations,” let alone “peaceful development” in this article. As the lead article by young national-security thinkers in a journal of middling prestige, it may represent the views of a wider swathe of Chinese foreign-policy thinkers—not just the Beijing and Shanghai elite. On the other hand, it is hardly difficult to find articles in more elite fora, such as a mid-2014 article in 世界经济与政治 [World Economy and Politics] by Peking University professor Hu Bo, who sees the U.S.-Chinese rivalry “expanding to all of the Asia Pacific,” and that both sides are pursuing “针锋相对” [tit-for-tat] strategies in the military domain.

For American strategists, the realization that rivalry discourse has become conventional wisdom and even modish in China may prompt some due self-reflection. Perhaps ad nauseam bellicose articles and Washington think-tank analyses reflecting on the putative Chinese challenge and advocating for strengthening the pivot have now poisoned this ultra delicate relationship to a high degree. Are U.S.-Chinese relations in a good place if typical international-relations journals in China are running lead articles advocating for enhanced ASW and nuclear forces as the primary means to counter U.S. strategy?

The two most important countries in the world should be talking primarily about climate change, joint management of the volatile Korean Peninsula and Persian Gulf regions, and especially the Ebola crisis, wherein intensive and large scale U.S.-China military cooperative assistance could make a huge difference. But the sad state of present day U.S.-Chinese relations means the leaders and senior diplomatic delegations are instead most likely at the November meetings in Beijing to squander limited bandwidth trading slurs over the fate of inconsequential reefs (and related patrol activities).