How China Sees the Next 'Korean War' 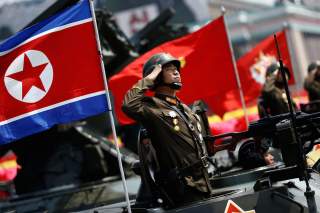 To be sure, the rhetoric of the past few days has been unprecedented and disturbing. Even if neither side resorted to nuclear weapons, the amount of conventional armed might—not to mention chemical weaponry—in proximity to major civilian population centers is quite sufficient to determine that a war on the Korean Peninsula could take the lives of millions. Now, Beijing has also hinted in its own way that it too is “locked and loaded” in the event that the United States strikes North Korea first, underlining that the Second Korean War could even spark a tragic great-power conflagration of epochal proportions. Yet, at the same time, it’s also plain that actions speak much louder than words, and that all the bombastic rhetoric might well amount to a somewhat logical prelude to intense negotiations, rather than an overture before nuclear catastrophe. Let’s hope so.

In this Dragon Eye column, I have long argued that North Korea is paramount among Asia-Pacific security issues, and that China is absolutely critical to any resolution (or even management) of the matter. For that reason, it behooves Americans to get “up close and personal” with Chinese thinking on the subject. An excellent primer is the English-language survey paper by Fu Ying, vice minister of the Chinese Foreign Ministry, that Brookings published back in May. It turns out that Chinese foreign-policy analysts and military strategists have a whole panoply of nuanced viewpoints on the subject of North Korea and what to do about it. There are even some optimists left in Beijing, for example Renmin University professor Jin Canrong, who wrote in a May 12, 2017, editorial, “The most likely possibility after North Korea ‘is possessing a nuclear weapon’ is that it has an even larger ‘poker chip’ to take into negotiations.” He added, “If North Korea would be really willing to abandon nuclear weapons, then the scenario of Trump inviting Kim Jong-un to eat hamburgers might well be possible. That would be a great achievement for Trump.” (如果朝鲜真的愿意弃核, 特朗普请金正恩吃汉堡的场景不是不可发生. 这将成为特朗普的一大成绩.) I will take on the challenging subject of developing a full typology of Chinese foreign-policy viewpoints on North Korea in my next Dragon Eye installment, but this edition will focus rather narrowly on the evolving military calculus on the peninsula.

As the wise Hugh White has written, one must sometimes fully envision a tragedy in order to avoid it, so that it turns out to be vitally important to “think the unthinkable.” This is done quite often now, and usually arrives at the same banal, yet fundamentally correct conclusion: that there is no military solution and that conflict must be avoided. Still, it is interesting and perhaps important to see if Beijing’s thoughts on the “unthinkable” are in line with Western appraisals. You would not find Fu Ying or even Jin Canrong discussing the details of a military scenario on the peninsula, but a series of in-depth articles in the June 2017 issue of the military magazine Naval & Merchant Ships [舰船知识] takes up a number of these sensitive questions.

The first of these Chinese military analyses articulates the rather terrifying notion that President Trump might seek a military conflict that would help to “distract attention from internal contradictions [转移国内矛盾].” It is noted that a U.S. president’s power in the foreign-policy realm is much greater and, moreover, that those powers are vastly increased across the board in wartime. However, the more interesting part of this analysis is the appraisal of North Korea’s military capabilities. Here, it is stated that the North Korean military may be weaker than often appreciated, because it has even “lacked basic fuel and ammunition for military exercises [缺乏基本的训练油料和弹药].” The article suggests North Korean artillery has limited range, and there is said to be a paucity of short-range missiles. Moreover, according to this analysis, the North Korean military is simply not equipped with an “active offensive capability [主动进攻能力].”

In fact, the article concludes that if North Korea were confronted with the massive air-attack capabilities of the United States, Pyongyang’s armed forces would have little alternative but to “lie upside down and take a beating [躺到挨捶].” This Chinese strategist says that such a conflict would not result in a direct U.S.-China military clash and so that it could be a “low-risk war [底风险战争]” for the United States, at least. For North Korea, this strategist suggests Pyongyang must aim at “prolonging the conflict’s duration [战争就会长期化].” These appraisals differ quite substantially from prevailing military assessments in the United States. However, one of the best explanations of Kim Jong-un’s evident determination to pursue nuclear weaponry could well be that North Korea’s conventional forces are perhaps much weaker than generally supposed. While the author levels several critiques at Washington, including the tendency of one president to completely contradict the policies of his predecessor, the piece has a rather surprising conclusion. It hints strongly that Beijing’s patience with Pyongyang is wearing very thin, and asserts rather surprisingly that America is actually not seeking to bring strategic pressure against China. Consistent with that assessment, the author hypothesizes optimistically that, if a war occurred on the peninsula, the United States “might well leave the peninsula altogether in the aftermath [很可能在战后撤离朝鲜半岛].”

A second military assessment in this series takes as its focus the credibility of North Korea’s nuclear deterrent—and is substantially less sanguine. It explains that the individual probability of a North Korean nuclear warhead striking U.S. territory is not high, but that the possibility that just “one single warhead actually penetrates the defenses to successfully realize a nuclear explosion creates an enormous psychological deterrent against the United States [1枚成功投送并突防成功实现核爆, 也是对美国巨大的心里威慑].” Praising U.S. strategy in the Cuban Missile Crisis, this Chinese strategist explains that it is not enough to possess nuclear weaponry, but that a country must signal its “determination to resort to nuclear weapons [核武器使用决心]” in order to achieve its desired strategic goals. That may well involve “discounting expected dangers [抵消威胁预期]”—a phenomena quite visible in the current crisis.

This assessment projects that North Korea’s possession of nuclear weapons could be decisive, but perhaps in unexpected ways. It is asserted that these weapons are most important to assuring that North Korea will not lose the war [可以通过核武器保证自己不失败]. Moreover, they may play an important role in preventing an escalation of a war once it has begun. For example, the analysis notes that the United States could not execute an Inchon-style envelopment when Pyongyang possesses the “ultimate weapon.” This author ultimately sees North Korean use of nuclear weapons as extremely unlikely, since that would be the “termination of the North Korean regime and nation [对朝鲜政权和民族都将是毁灭性的].” So, therefore, Pyongyang is not likely to reach for the nuclear button “if a plane is shot down or a ship is sunk.” For North Korea, the author contends, “nuclear weaponry is simply to protect national survival [核武器就是为了保证国家生存].” Lest anyone get too optimistic reading these thoughts, this Chinese military assessment closes with the observation that the most probable targets for North Korean nuclear weapons include Osan or Busan bases (in South Korea), Okinawa, Guam, Hawaii and U.S. carrier groups offshore.

A third assessment in the series develops an analysis of a potential U.S. preemptive strike, and concludes that such a strike is very unlikely to succeed, since there are too many targets, most of them are mobile and many “have also been hardened multiple times, and some are even built with the capability to withstand a nuclear strike [过了多次加固有一些甚至具备抗核打击能力].”

The above discussions regarding Chinese appraisals of possible military scenarios on the Korean Peninsula should not be regarded as authoritative. In fact, they are somewhat contradictory. For the authoritative Chinese position, one should certainly still consult Fu Ying’s paper for Brookings. However, it is still worthwhile to try to “look under the hood” of Chinese foreign policy and strategy as I have often endeavored to do in this Dragon Eye series. There might be a few insights here that could prove helpful to Washington’s admittedly challenging diplomatic circumstances. For example, it could be useful to understand that conventional military power asymmetries may be a significant driver for Pyongyang’s nuclear push. Likewise, it is somewhat reassuring to see that Chinese strategists also interpret North Korea’s likely nuclear doctrine as rather defensive, and as a weapon of last resort.

The unsettling feeling is now setting in that the U.S. homeland remains quite vulnerable, and that we have awkwardly returned to, more or less, a situation of mutually assured destruction—this time with a little, backward country that seems bent on making a mockery of America’s global stature. There will be an increasing tendency, of course, to crack the sanctions whip ever harder in search of a cost-free solution. But that is almost surely a delusion, unfortunately, and may well make the crisis worse, since backing an angry tiger into a corner is all but certain to cause unpredictable outcomes. For that reason, I have argued that what is needed now are not only strong deterrent measures, of course, but also an energized and creative “carrot diplomacy,” as I have spelled out elsewhere. This might also be supplemented by a tight China-Russia phalanx that can provide North Korea with the credible security assurances it logically seeks as part of a freeze/denuclearization grand bargain. Beijing may have taken a step in this direction recently.