How China Sees the Risky Path Ahead With Taiwan 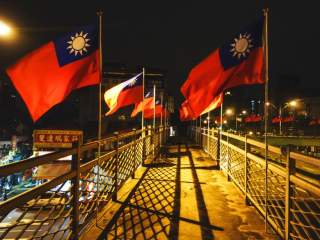 There are lots of rocks in the Western Pacific. If various and sundry hawks have their way on U.S. national security policy in the South China Sea, then Americans will be learning the names of such obscure features of marine geology as Scarborough Shoal, Fiery Cross Reef and Reed Bank. They may even soon become household names like Raqqa, Mosul and Kunduz. Let’s hope not, because the consequences would be far more deleterious for U.S. national interests.

However, there is a rock out there of seminal importance to world order for the twenty-first century. That rock is Taiwan and it has 23.5 million people on it—distinguishing it quite clearly from most other rocks (or reefs) out there that have quite oddly occupied the bandwidth among journalists and strategists since 2010. Taiwan has been an extraordinary issue in US-China relations since 1949 when Chiang Kaishek’s Nationalists fled to the island after defeat in China’s civil war. The only reason that Taiwan has been, by and large, out of the headlines since 2008 is that the island’s leader Ma Yingjeou quite radically shifted course from his two predecessors and bravely pursued a rapprochement with the mainland. That far-sighted policy has made for eight quiet years. Only readers unfamiliar with the very dicey situation across the Taiwan Strait from 1997-2007 could fail to appreciate the welcome and prosperous calm that has characterized the Taiwan issue over the last several years.

Of course, Beijing has always operated from the premise that it might ultimately have to use force against the “wayward province.” A sample of the new weaponry in its bristling arsenal that could be used to coerce “the beautiful island” might include:

2) a large fleet of submarines currently being equipped with supersonic anti-ship cruise missiles (a capability the US Navy still lacks) for holding the “barbarians” at a distance from the fight;

4) a much improved and large-scale helicopter fleet that suggests a Chinese amphibious assault would take place in three dimensions instead of two.

Against this buildup, the Obama administration recently announced it would proceed with a multi-billion dollar arms sale to Taiwan, but these weapons, such as destroyers designed in the 1970s, will hardly alter the bleak military outlook for Taipei.

A presidential election in the offing for January 2016 on Taiwan has the real prospect of a change in the ruling party, which means that Ma’s constructive direction for cross-strait relations could be reversed. With that in mind, this edition of Dragon Eye will probe a little deeper into Beijing’s sentiments with respect to the probable winner of that election, Ms. Tsai Ing-wen. After Tsai’s June trip to the United States, the lead article in the mainland journal 现代台湾研究 [Modern Taiwan Research], published by the Fujian Academy of Social Sciences, reacted with a short analysis that did not pull any punches.

The author starts out by comparing Tsai to the last Democratic Progressive Party (DPP) leader of Taiwan (Ma’s predecessor) Chen Shuibian, concluding that Tsai may be “更大的‘麻烦制造者’” [an even bigger ‘trouble-maker’]. The author contends that she was previously “最亲日本” [most inclined toward Japan], but also that she will “rapidly reorient [Taiwan] toward the U.S.” A highly suspicious viewpoint regarding possible Taiwan entry in the Trans-Pacific Partnership (TPP) is presented and the author, moreover, claims that Tsai “mixes up black and white” by blaming all Taiwan’s economic maladies on the mainland. The analysis notes that Tsai’s speech in Washington mentioned the term “democracy” no less than twelve times, described as an obvious effort to side in the political realm with the United States and against China. In the realm of security, the author decries Tsai’s determination to reinforce Taiwan-U.S. military cooperation and her promise that Taiwan will be a reliable partner for the United States in upholding regional security and stability. He also points out disapprovingly that Tsai’s visit to both the White House and the State Department represent a “breakthrough” for expanding the limits on Taiwan visitors to Washington. In the end, the analysis mocks “Taiwan-style democracy” as causing one to “笑掉大牙” [laugh one’s head off]. More soberly, the analysis states that the DPP continues to oppose “one China,” and its party program still calls for “Taiwan independence.” “Will the U.S. permit Taiwan to go over the edge?” the author asks.

To be fair, mainland experts on Taiwan had also expressed a certain level of frustration with Ma Yingjeou as well. A mid-2015 analysis from 台湾研究 [Taiwan Research], published by the China Academy of Social Sciences, notes with evident discontent that Ma has said, “There is no urgency to reach a [cross-strait] peace treaty.” There is some degree of empathy in this piece, or at least recognition, of Taiwan’s “caution” and “high level doubts,” as well as the related desire in Taipei to take the approaches: “先易后难” [first easy, then hard] or “先经后政” [first economics, then politics]. But there is criticism of the lingering influence of the “‘去中国化’及反共教育” [‘leave China’ and anti-Communist education] in Taiwan politics, especially as 2014 was said to have witnessed some tendencies in Taiwan toward “反中” [anti-China] “恐中” [China-terror] sentiments. In the wake of the “rebalance,” Washington is said to have “continuously strengthened its political and military control of Taiwan” in order to “以台制华” [use Taiwan to control China] and to prevent the cross-strait relationship from transcending the status quo.

Since the meeting between Xi and Ma in Singapore in early November 2015, many Western analysts have tended to view those historic talks as a mere election year ploy. That is unfortunate, because the cross-strait rapprochement since 2008 has served American national interests well. Entering into a period of greater uncertainty with respect to the Taiwan question, Washington hawks are certain to try to exploit Beijing’s current challenges in the cross-strait relationship. However, American strategists would be wise instead to reflect on some observations regarding similar dilemmas a decade ago from the most recent book by senior Bush Administration China expert and Princeton’s Thomas Christensen: “. . . If Washington (and Tokyo) were looking for a chance to wrest Taiwan away from the mainland forever. . . President Chen provided a clear opportunity to do so. But the Bush administration eschewed such an opportunity at every turn, and at times actively opposed Chen’s actions.”

Lyle J. Goldstein is Associate Professor in the China Maritime Studies Institute (CMSI) at the U.S. Naval War College in Newport, RI.  The opinions expressed in this analysis are his own and do not represent the official assessments of the U.S. Navy or any other agency of the U.S. Government.