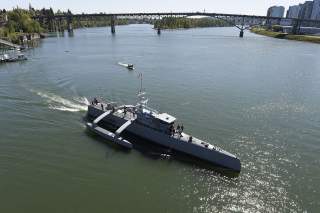 The Sea Hunter antisubmarine warfare continuous trail unmanned vessel was unveiled to considerable fanfare during 2016. This vessel has the promise to revolutionize naval warfare in the same way that Predator and Reaper drone aircraft have fundamentally altered counterinsurgency and counterterrorism. The forty-meter-long trimaran is much larger than any other attempts at fielding drones into the maritime domain, but is said to be capable of patrols of up to seventy days at a bewildering distance of ten thousand nautical miles. Were that not impressive enough, the robot ship is tasked with the most challenging mission of tracking quiet adversary diesel submarines. At a single (and seemingly quite affordable) stroke, this new technological innovation may have overturned some starkly unfavorable strategic trends in the Asia-Pacific.

Naturally, Chinese strategists are somewhat unnerved by these developments. One authoritative source describes the Sea Hunter as a “severe challenge to our country’s future submarine force [对未来我海军潜艇部队构成严峻挑战].” Another Chinese defense analysis concludes, “Undoubtedly, dealing with this shadowing-type unmanned ‘sentry’ already confronts China with a new study topic with respect to equipment development and tactical employment [已经成为中国在装备发展和战术使用中面临的新课题].” This edition of Dragon Eye will make a brief survey of these Chinese analyses of Sea Hunter in the hopes of coming to some conclusions about the future trajectory of this intensifying naval rivalry on and under the sea.

The quote immediately above comes from a rather detailed analysis that appeared in the June 2016 issue of Ordnance Knowledge [兵器知识]. The article presents some reasonably detailed data on Sea Hunter’s capabilities, including maximum speed (fifty kilometers) as well as the boat’s seakeeping abilities in rough weather “even up to sea state 7 [甚至在7级海况下].” Using active sonar mode, this Chinese estimate suggests Sea Hunter can detect submarines at a distance of up to eighteen kilometers. Much of the article discusses the vessel’s rapid development process, detailing the interaction over several years between DARPA (Defense Advanced Projects Research Agency) and the U.S. defense companies Leidos and Sonalysts. A particular emphasis in the article is placed on the relatively low cost of Sea Hunter, which at just $20 million per unit is more than ten times cheaper than each P-8 Poseidon antisubmarine aircraft, according to this Chinese analysis. Similarly, the drastically lower daily operating cost of this unmanned vessel compared to manned ASW systems is also highlighted. Of course, the main advantage of deploying such a system, namely that it does not put lives at risk [不会引发人员伤亡的后果], is also mentioned. In terms of how the United States might deploy Sea Hunter in battle, the authors of this analysis project that large numbers of these craft will be sent to undertake twenty-four-hour monitoring of points of egress for the Chinese submarine force [对中国海军潜艇的重要进出水道和海峡实施24小时跟踪].

The somewhat highbrow forum Defense Science and Technology Industry [国防科技技术] also published a piece about the same time. It is quite unusual for this magazine to focus on singular platforms or weapons systems, so this attention speaks to the perceived importance of Sea Hunter for China’s future military development. Among the authors of this piece is the well-known Chinese military academic Li Daguang [李大光] of China National Defense University. Li and his colleagues do not mince words, but declare that Sea Hunter will “precipitate a revolution in the domain of naval strategy [在海军战略领域引发革命].” Touching on another key advantage of the platform, they observe that Sea Hunter is not constrained by “human physiological or psychological limitations.” Although understanding that the present boat has no weaponry, this analysis appraises the vessels as having “rather good stealth characteristics.” The piece conveys that the Sea Hunter can help the U.S. Navy with its problem of having insufficient numbers of submarine and surface ASW assets [攻击潜艇和水面舰数量缩减后搜潜力量不足的问题]. As in the previous article, there is a recognition that the pursuit of Sea Hunter by the Pentagon has been fundamentally an effort to reduce platform and also operating costs. One approach advocated by these Chinese defense analysts is to double down on fielding “new-type nuclear submarines, and thus fundamentally reverse the [current] situation.”

A third Chinese analysis published in 2016 (no. 11) in the journal Ordnance Industry Science and Technology [兵工科技] is especially interesting, as it casts a somewhat skeptical eye upon Sea Hunter unlike the other two papers summarized above. The analysis begins with the observation that the United States already has the world’s most advanced antisubmarine system, relying on a wide array of sensors and platforms ranging from space satellites to fixed sonar arrays operating in the most important channels and straits. However, the admiration ends there and this analyst suggests that “the hull and superstructure seem very simple from outward appearances [外形极为简单].” It continues, “The whole model seems [like] science fiction [整体造型相当科幻].” Regarding its sonar-detection capabilities, the piece notes that the sonar will be hull mounted and that the vessel is unlikely to be equipped with a relatively advantageous towed array sonar. Moreover, the author points out that computer algorithms could be deficient at reading sonar signals and may have difficulty distinguishing a “reef, from a whale, from a submarine. And if it indeed is a submarine, does it belong to one’s own navy, an ally, or the enemy.” This author doubts that such complexities of the undersea environment will be easily solved by unmanned systems. There is additional doubt about weaponizing Sea Hunter and so the innovative platform is dismissed as “just another . . . sensor node.” Further doubt is raised concerning whether such a small vessel can really operate effectively in rough seas [高海况].

In the end, the most severe critique offered in this third Chinese appraisal is the conclusion that Sea Hunter might be used effectively by the U.S. Navy against a “weak adversary, such as Iraq or Libya.” By contrast, against an opponent with a “highly effective submarine combat system . . . [along with] a comprehensive maritime strike system,” the author does not see a major role for Sea Hunter. Indeed, the final section of the article surmises that such unmanned vessels operating forward without cover could become easy targets themselves for either unmanned aircraft or even “fishing boat interference [渔船干扰].” In a somewhat haunting prophecy that seems to echo the recent Chinese drone snatch in the South China Sea, the final sentence of the analysis suggests that the Sea Hunter could well become the “adversary’s war prize [对方的战利器].”

Taken together, the articles above suggest that Chinese defense strategists and scientists are busy scrutinizing this latest innovation developed for the U.S. Navy. It is to be expected, of course, as this rivalry heats up in the maritime domain (among others), that each side will invest ever more heavily to counter the other. Not surprisingly, Chinese strategists seem to disagree with one another, to some extent, regarding the challenge to the PLA Navy that Sea Hunter represents. Possible clues to Chinese responses are revealed in these discussions and such steps could well include devoting more resources to nuclear-submarine development (vice diesel boats), as well as developing a system to track and destroy Sea Hunter itself, of course. Indeed, it must be emphasized that the undeniable trend toward unmanned systems over the last decade in U.S. strategy has developed within the rather permissive environments of counterinsurgency warfare rather than in high-intensity warfare between great powers. So, their value in contingencies against peer competitors remains a considerable unknown. Perhaps that is unduly pessimistic, and indeed American defense scientists are, once again, to be congratulated on this undeniably impressive technical feat. The scope for civilian spinoff applications in the commercial and scientific research realms, meanwhile, seems enormous.

But we military strategists are a pessimistic and dour lot. Much more unnerving than the possible extensive loss of these unmanned vehicles in combat would be the reasonably likely prospect in coming years of a PLA Navy version of Sea Hunter “with Chinese characteristics” that regularly plies the international waters off of Apra and Pearl, or maybe even Bremerton and, yes, King’s Bay eventually too. Regrettably, that may be the dangerous future into which we are presently spiraling downward.