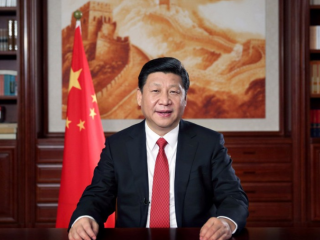 CHINA’S RAPID ascent to great-power status has, more than any other international development, raised concerns about the future of the liberal international order. Forged in the ashes of the Second World War, that order has enabled a seven-decade period of great-power peace, the expansion of democratic rule and a massive increase in global prosperity. Now, it seems, world order is under threat—not least from China’s rising power. While Beijing has thus far avoided active military aggression and refrained from exclusionary economic arrangements, American policymakers worry quite openly about China’s challenge to the underlying rules of the road. They hope that Beijing will embrace the existing pillars of global order and even work to support them; they fear that China will prove revisionist, seeking to undermine the rules-based order and fashion an illiberal alternative that excludes the United States.

This combination of hopes and fears has driven America’s China policy across multiple administrations. From Bush administration–era exhortations that Beijing act as a “responsible stakeholder” to Obama administration hopes that China would become a “partner in underwriting the international order,” American leaders have consistently called on China to join the prevailing global system. The question underlying the U.S. approach has not been whether the premise is correct, but rather which combination of carrots, sticks and engagement is likeliest to ensure that Beijing firmly embraces global rules and institutions. But at a moment when China is transgressing some of those rules and establishing alternative institutions, it is worth looking closely at the assumptions that have undergirded U.S. policy.

Three propositions support America’s approach. The first is that there exists one more-or-less-unified liberal international order, and that this order is both based on rules and open to any nation that seeks to join it. The second is that if China is brought into this liberal order, the underlying rules and institutions will shape Beijing more than they will be shaped by it. The third is that it is the task of the United States and its partners is to bring China into the existing order, and that if the attempt proves unsuccessful, the seventy-year-old, rules-based global order is headed for the dustbin of history.

The three propositions suggest a sophisticated U.S. approach to the world’s second most powerful country—one that sails between the Scylla of containment and the Charybdis of unconditional engagement. They promise an American policy based on enlightened self-interest and positive-sum outcomes in which, as Secretary of Defense Ashton Carter recently said, “everyone rises and everybody wins.” And it extends a hand to Beijing: come on in, China, and you’ll see that the rules-based water is fine.

The trouble is that each of these propositions is woefully incomplete. They simplify both the nature of world order and China’s role in it. And so long as they serve as the basis for American policy, Washington’s approach will lack the nuance and understanding required both to prod China toward greater global integration and to bring partners on board the effort.

CONSIDER FIRST the liberal international order from which China has benefitted and to which it should contribute. The term “international order” is shorthand and can invite confusion. There is not one order but many different components and layers of order. These include global institutions, such as the United Nations, the World Trade Organization and the International Monetary Fund, as well as regional institutions, such as the Asia Development Bank. They also include a dense network of treaties and regimes, ranging from the UN Convention on the Law of the Sea (UNCLOS) to the Nuclear Nonproliferation Treaty. The United States itself cannot be considered a “responsible stakeholder” in every one of them. Together with various rules and norms, ranging from those governing state sovereignty to those that relate to human rights, these institutions and regimes are interconnected but have distinct aims. They vary widely in their reach and purpose.

China has long been party to institutions and regimes, and its decision to support the prevailing system is not a binary one: Beijing rejects some rules, accepts others and seeks to rewrite others still. As a result, there is no single answer to the question of whether China intends to embrace the rules-based international order, nor is there a monolithic way to characterize the type of great power that China aspires to be.

In many global institutions, Beijing has proven a willing partner, and it has sought a leadership role in crafting new international regimes. In economic affairs, China seeks greater representation in and revisions to global institutions, just as it creates new economic institutions and regimes at the regional level. When it comes to security issues close to its borders, China is especially likely to reject prevailing regimes and rules.

Because there is no single international order, and because Chinese participation is diverse and complex, U.S. leaders cannot simply absorb China into a preexisting structure. If American policymakers hope to increase China’s participation in the web of institutions, regimes, rules and norms that together constitute world order, they must craft an engagement strategy that is as nimble as Beijing’s international participation itself.

WHEN POLICYMAKERS invoke the “liberal, rules-based international order,” they engage, consciously or not, in a fair bit of euphemism. The phrase refers to the prevailing constellation of institutions, regimes, rules and norms that seek to govern international behavior, many of which have been put in place under U.S. leadership since 1945. It is a rules-based order because it elevates standards above a might-makes-right doctrine, though there remain broad domains—such as cyberspace—in which few rules exist. It is open, because any nation-state that wishes to follow those standards can join its ranks; there are no exclusionary regional or ideological blocs. And it is liberal, because it is weighted toward protection of free-market capitalism and liberal political values. This order did not materialize as an undifferentiated structure; rather, it was built on many different levels, for many different purposes, over a period of many years. Some of the rules underpinning the maritime order, for instance, date back centuries, while standards expressed in key human-rights conventions are relatively new.

China was a founding member of several of the global institutions at the center of this order, including the United Nations, the International Monetary Fund and the World Bank. Other institutions took shape without Chinese participation. China joined the World Trade Organization only in 2001, for example, after a lengthy negotiation process and a period of observer status, and is a member of the G-20, but not the G-7. In addition, China participates in many regional organizations, including the Asian Development Bank, which it joined twenty years after its inception, and the East Asia Summit, of which it was a founding member and the key initial organizer.

Multilateral treaties and regimes represent another layer of international order, and China has a complex history of participation in them. The 1968 Nuclear Nonproliferation Treaty enshrined China as one of five nuclear states, but China did not ratify the treaty until 1992. It now participates to some degree in all the multilateral regimes governing nuclear, chemical and biological weapons. China played an active role in UNCLOS negotiations, but did not ratify the treaty until 1996, and since then has repeatedly contravened the accord’s provisions.

Prevailing norms may not be codified in formal documents or contain clear enforcement mechanisms. Rather, they become part of the global order as significant numbers of states support and uphold them. These include state sovereignty norms as well as others governing human rights, some of which are expressed in nonbinding agreements like the Universal Declaration of Human Rights. It comes as no surprise that China’s support of specific norms has both varied over time and changed as its definition of national interest has evolved.

Since 1945, active American leadership has been critical to the design, expansion and enforcement of international institutions, regimes and norms—across time, geography and issue area. But China has also helped to construct some of these rules, and the degree to which China played a role in fashioning global standards varies widely. China does not lie entirely outside this system, and Foreign Minister Wang Yi went so far as to declare in September 2015 that China is a “staunch supporter of the current international order.”

This characterization is clearly a shorthand of its own, and not fully accurate. As it has continued to amass a larger share of global power, China has taken exception to key international rules, established new institutions and regimes, and simply ignored other elements of global order that Chinese leaders believe inappropriately constrain their foreign policy. American policymakers and lawmakers therefore need a fuller view of Beijing’s variegated international approach if they hope to shape future Chinese attitudes and determine which Chinese actions to support or oppose.

IN RECENT years, China has begun to take active steps toward bolstering some existing global institutions and has become involved in the drafting of new global rules. For decades China was a fairly indifferent member of the UN Security Council, often abstaining from votes or taking a stand only when another member (typically Russia) was also willing to adopt the same position. This passive stance is changing: China has tripled its contributions to the UN budget (and now gives as much as Britain and France), deployed thousands of troops on UN peacekeeping missions and edged toward a more assertive position in the Security Council.