How China Sees World War I 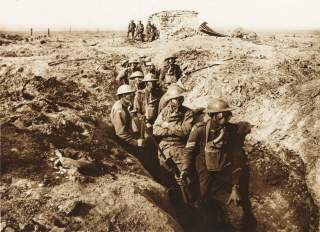 Over the course of 2015, readers can look forward to ever more commemorations of such crucial events from the Great War as the infamous sinking of the liner Lusitania, not to mention the unfolding of the bold and bloody, but ultimately bungled Gallipoli campaign.  From the perspective of Asia-Pacific security, the last year of sober reflection on the cataclysmic First World War has been quite useful for jarring this community of strategists to think about misperception, escalation spirals, nationalism, and offensive-oriented military strategies.

A new book from the Belfer Center at Harvard University explicitly links the memory of the Great War with emergent security challenges related to China’s rise. This author undoubtedly looks forward to parsing this new scholarship, but that is not my purpose here.  Much has been made of the analogy between Germany’s rise with the consequent outbreak of WWI and China’s rise with the clouds of uncertainty currently looming over the South and East China Seas. But what of China’s perspective on this much-discussed analogy?

As pointed out in a recent edition of Dragon Eye, the much more salient historical event in Chinese eyes is not WWI, but rather the Sino-Japanese War of 1894-95, a set of events that seems to have been discussed in all major Chinese military and diplomatic fora.  Still, a few Chinese strategists and scholars have taken up the issue of the First World War and this edition of Dragon Eye will survey and summarize these pieces in the hopes of understanding the Chinese view of these momentous events in the European context that reverberated so powerfully around the world.

Most of the recent Chinese reflections about WWI have, not surprisingly, taken as their focal point the remarks made by Japanese Prime Minister Shinzo Abe at the Davos Summit about one year ago.  Abe observed:  “This year marks the centenary of World War I. Britain and Germany were highly (inter)dependent economically. They were the largest trade partners (to each other), but the war did break out.”  By contrast, Chinese commentators emphasize that neither China, nor Japan can approach this history as disinterested observers. To their reckoning, China was one of the primary victims of the Versailles Treaty, while Japan was one of the leading parties in subverting its major principles to the detriment of China.  Indeed, Westerners not familiar with the “May 4th Movement” may not realize that the perceived failure of the Versailles Treaty – most particularly the direct transfer of German concessions in Shandong Province to Japan – became a major foundation for Chinese nationalism in the 20th century.  This movement and the feelings that inspired it, moreover, were related to the founding of the Chinese Communist Party just two years later in 1921.

(Recommended: The Most Terrifying Lesson of World War I)

As one Chinese analysis of the First World War, published by Xinhua researcher Qian Wenrong,  in the April 2014 edition of the magazine 军事文摘 [Military Digest] under the title “What is the Most Important Lesson of the First World War?” relates:  “ … at the Paris peace talks, the United States approved Japan’s seizures in Shandong.  After the war, Japan accelerated its invasion and expansion into China, occupying our country’s three northeastern provinces. The powers … including the United States, Great Britain, and France … did not even apply any sanctions against Japan, refused … to call Japan an invading state, and even demanded that China recognize Japan’s ‘special rights and interests’ in China’s Northeast, thus in actuality supporting Japan’s invasion.”

(Recommended: The Ghost That Haunts the Chinese Navy)

A longer version of that analysis by Qian appeared in the foreign policy journal  和平与发展 [Peace and Development]. In that article, Qian went even further in writing: “When Hitler came to power, he used the societal discontent with the Versailles Treaty and concern about economic difficulties to drive forward with military expansion.  In that respect, Abe is very similar to Hitler.”  He goes on to describe Abe’s attempts to reform Japan’s “peace constitution,” and suggests Abe is trying to “use Obama to contain China through implementation of the ‘rebalance to the Asia’ strategy…” Speaking directly to Abe’s WWI analogy, Qian states emphatically: “Contemporary China absolutely is not the Germany of 1914.  China’s leaders have announced to the world on many occasions that China ‘will never become a hegemonic power …’”  Ultimately, for Qian, the most significant lesson of the Great War are that the settlement of that conflict planted the seeds for the next world war by encouraging Japanese militarism and inflaming Germany’s bitterness as well.  Obviously, the historical wounds of the Japanese conquest of China are simply too raw for Qian to attempt a more detached and clinical perspective of the type that is commonplace among Western social scientists.

Fortunately, some Chinese analyses of WWI are a bit less emotive.  For example, a mid-2014 analysis that first ran in 解放军报 [People’s Liberation Army Daily] and was later republished in军事文摘 [Military Digest] discusses the impact of the war more generally and does not even directly broach the Abe speech at Davos.  It is somewhat reassuring, of course, to see this Chinese military newspaper reflecting on the utter failure of the “施里芬计划” [Schliefflen Plan], the risky German strike against France that opened the conflict.   Some attention to Western theorizing about WWI is indeed suggested by a reference to    “今天被西方学者称之为‘邪教攻势’” [what is described by Western scholars as a ‘cult of the offensive’].   The article discusses some of the war’s gravest atrocities, including the use of poison gas, as well as the incredible human costs.  While intoning that the Asia-Pacific must not walk this “blood-soaked road” again, the article also warns against “certain countries that are stirring up disputes  …”

An example of a much more scholarly Chinese-language discussion of WWI can be found in a 2013 edition of 国际政治研究 [International Politics Quarterly], published by Peking University.  In this impressive article that has the title “Economic Imperatives, Interdependence, and Germany’s War Decision in 1914,” Peking University Assistant Professor Mei Ran argues that economic factors have been overemphasized as a major cause of Germany’s decision for war in WWI.  In an atmosphere where Marxian analysis of world history still generally predominates, this conclusion is likely quite original and even boldly innovative. The suggestion that, in this case, political factors, whether originating in military strategy or in noxious political ideologies, may have completely trumped rational economic impulses favoring peace could well be germane to contemporary Chinese foreign policymaking, and to the larger dilemmas in U.S.-China relations as well.

It seems clear from the brief survey above that there is quite a range of views in China on the legacy of the First World War.  Some Chinese strategists seem inclined to use the centenary to “score points,” or are generally bitter that China’s role as a victor’s prize and victim of exploitation during that painful period has not been adequately recognized.  Nevertheless, the final article discussed above from Peking University does hint at a sophisticated historical understanding among China’s leading scholars of international relations. That at least some in the Beijing foreign policy elite have a profound understanding of great power rivalry and its catastrophic costs for Europe in the early 20th century, may suggest yet another reason why Western policymakers should not readily dismiss Xi Jinping’s call for a “new type of great power relations.”  At a minimum, this open-ended phrase has value in concisely articulating what we all seek to avoid.

Editor’s Note: The following is part seven of a new occasional series called Dragon Eye, which seeks insight and analysis from Chinese writings on world affairs. You can find all back articles in the series here.