This Is How China Is Slowly Creeping into Latin America 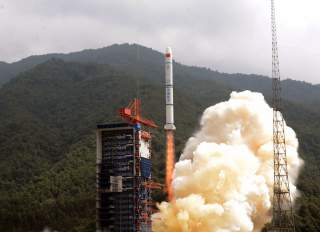 As China’s 19th Party Congress consolidates Xi Jinping’s position as the country’s most ambitious leader since Deng Xiaoping or possibly Mao Zedong, China and the United States are engaging in a global rivalry that echoes the Cold War with the Soviet Union. This time, it is a struggle for influence in global markets.

Latin America is the scene of China’s latest offensive. It has captured Latin American imaginations with tantalizing promises of partnerships in space technology. The launch of a third satellite for Venezuela last month is only the most recent example of longtime U.S. space partners being courted by Beijing. Much like other markets, China is vying for influence and market share through government subsidies for its space program that have trickled down into their activities abroad. Industry leaders worry that the growing influence of China in the global space market could have consequences for the United States, if it cedes ground in an industry that it has historically commanded. As the global space industry takes off, the United States should look to partner with Latin America and others and reassess their toolkit for countering China in space.

Through state-owned entities like the China Great Wall Industry Corporation, the Chinese government has been forging space partnerships in Latin America for decades. The country began its efforts in the 1980s, with the creation of the China-Brazil Earth Resources Satellites (CBERS). Since then, CBERS has helped bring both countries into the twenty-first century with the development of five earth-observation satellite models, with the CBERS-4 being the most current operational model. The two countries have also participated in BRIC bloc space cooperation, agreeing in July to jointly construct a remote-sensing satellite constellation with other members of the bloc.

In Venezuela, the Chinese space connection dates back to 2008 with the launch of the Venesat-1 communications satellite. Beijing’s assistance continued with the development and launch of the VRSS-1 remote-sensing satellite in 2012 and the VRSS-2 that launched earlier this month. China has fashioned similar relationships with Bolivia and Nicaragua, and has provided technical training to locals involved in these projects.

The common thread throughout these projects is that they have largely been financed through direct investments by the Chinese government. Beijing currently covers 70 percent of the funding for CBERS, with Brazil covering the additional 30 percent. Bolivia’s $302 million Tupac Katari satellite was largely financed by the China Development Bank, and by extension the Bolivian space agency, the latter of which was launched primarily to support this project. Additionally, the People’s Liberation Army’s Satellite Launch and Tracking Control General invested a reported $300 million in a space monitoring base in Patagonia, Argentina, which some are concerned could eventually be used for military purposes. Venezuela’s satellite projects have also been financed by China, with repayment coming partially in the form of oil.

The United States, on the other hand, relies heavily on agency collaboration, and generally avoids Chinese-style investments. Through the National Aeronautics and Space Administration (NASA), the United States has partnered with Latin American countries on a number of space-related projects, including the SAC series satellites with Argentina’s National Commission on Space Activities and the project with the Brazilian Space Agency to examine climate and space weather patterns in Brazil.

In addition to agency collaboration, the United States is heavily reliant on its commercial sector to represent its capabilities in the global space market, where a number of private companies provide space launch and satellite manufacturing services for Latin American countries. SpaceX, for instance, made history in March 2017 when they successfully launched and landed a recycled Falcon 9 rocket for the first time when launching an Airbus SES-10 communications satellite deployed to provide satellite services for Latin America. The Mexican satellite, Morelos-3, was built by Boeing and successfully launched on the United Launch Alliance (ULA) Atlas V rocket in 2015, following the loss of the Mexsat-1 satellite earlier that year due to a Russian launch failure. This followed the successful launch of the Mexican-owned Bicentenario satellite in 2012, which was built by Boeing and launched by Europe’s Ariane V.

Relative to China, however, U.S. investment in Latin American space has been limited. As China prepares for another upsurge in engagement with Latin America, space partnerships emerge as another source of Chinese leverage over the United States in the region. The country’s space program had a particularly successful 2016, which witnessed twenty-one successful space launches, just one less than the United States, though failures this year have hindered China’s launch schedule for 2017. Additionally, the country plans to complete the Beidou Navigation Satellite System by 2020, and hopes this global navigation system will be able to match the capabilities of similar systems from the United States, Europe and Russia. China has pledged to direct hundreds of billions of dollars worth of trade and investment into the region in the decades to come.

Furthermore, space technology produced in-house has been on the rise in Latin America, setting the stage for a potentially dynamic space industry worth partnering with. Argentina has launched two homemade satellites in recent years, and Brazil is working towards sending domestically made satellites into space on domestically manufactured rockets by the end of the decade. Costa Rica, Ecuador, Peru and Uruguay have also been investing in in-house satellite capabilities, choosing to develop low-cost CubeSat technology.

The United States remains the most important partner for many Latin American countries with ambitions to develop commercial and scientific capabilities in space. Yet China has become a competitor in this sector, in a region that is often taken for granted by Washington. As the space sector becomes increasingly commercialized, members of the newly re-established U.S. National Space Council should consider how best to leverage the industry to meet the challenges posed by Chinese competition. Actions have been taken and concessions made in the past for other industries heavily subsidized by China. Who is to say that similar efforts could not be implemented to protect U.S. space-faring entities?

Sean Kelly is the internship program and operations manager at Hudson Institute. Additionally, Sean monitors aerospace, defense policy and industry developments for Hudson research staff and has written on space and foreign policy for several publications.