How China and the United States Can Learn to Get Along 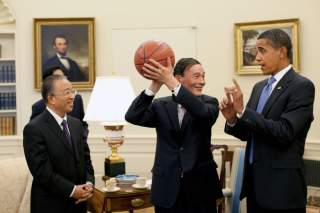 Great Britain long reigned as the globe’s greatest maritime power, determined to maintain a navy as strong as those of its next two competitors combined. The policy succeeded against such competitors as France and Spain.

However, by the end of the 19th century, Britain’s industrial revolution had run its course and two emerging powers ended London’s economic primacy. After violently breaking away from its colonial master, the United States overspread the North American continent and expanded beyond. Recently united Germany pressed to make up for lost time and achieve its place “in the sun.” Britain could not contain them as well as its traditional European rivals.

London chose to accommodate the United States and confront Germany. The result of the first was a somewhat fractious partnership that evolved into an enduring alliance. The result of the second was two world wars before the global order was settled.

Washington faces a similar choice in dealing with the People’s Republic of China. There are many differences in circumstances, of course, but there is one overriding similarity: the globe’s dominant force, accustomed to premier status, faces a serious challenge from a new power mixing rapid economic growth, nationalistic exuberance, and powerful grievances. Irrespective of America’s wishes, the status quo will not hold. Washington has been attempting a policy sometimes called “congagement,” mixing containment and engagement. As territorial disputes in the Asia-Pacific sharpen, however, the United States increasingly faces a choice between accommodation and confrontation.

Into this imbroglio steps Lyle Goldstein, a professor at the National War College. He performs two critical tasks in his new book, Meeting China Halfway. First, he acknowledges the legitimacy of the PRC’s desire for a greater international role. Second, he offers a strategy of cooperation for the two nations, which includes recognizing natural but much-reviled “spheres of influence.”

In challenging Washington’s growing hawkish consensus, he looks past the stark black-and-white contest presented by many U.S. policy makers and commentators. Goldstein advocates recognizing a larger Chinese role, a judgment “premised not only on the realities of the evolving global and regional balances of power but also on a reasonably positive outlook with respect to Chinese intentions. It is important to recall that China has no military bases abroad; nor has it resorted to a large-scale use of force for more than three decades.”

That could change, of course, but most likely would do so if Washington refuses to yield its dominating position. The young American republic pushed aside Great Britain, France, and Spain to dominate the North American continent. It should surprise no one if the PRC tried to do the same to the United States in East Asia.

Goldstein encourages both nations instead to choose cooperation, rewarding reach other’s good behavior. He acknowledges that to some, his strategy might seem to demand more of Washington. However, America’s military posture is far more dominant, which means that the United States must step farther back. Moreover, despite claims of weakness filling Washington, America remains by far the globe’s strongest state, with, writes Goldstein, “an almost unassailable strategic position.” Thus, the United States should lead for peace.

Forging a successful relationship requires Americans to honestly confront the past, which continues to color Chinese attitudes. It matters not what Washington intended to do or what message it intended to impart. Notes Goldstein: “the relationship is afflicted by history,” which “forms a major barrier to genuine reconciliation and thus also practical progress.” He doesn’t advocate an apology, but urges policy makers to be aware how the West, including America, imposed itself on China, and why that matters today.

From there, Goldstein discusses several difficult issues between the two nations and proposes policies that would encourage “cooperation spirals.” Some matters, such as economics and environment, are politically contentious, but not so freighted with emotion. Others reflect America’s and China’s roles in the world.

Goldstein begins with Taiwan. In a series of reciprocating steps, he urges the PRC to reduce military threats and allow expansion of Taipei’s international presence. In turn, he pushes the United States to end arms sales and encourage final status negotiations.

His proposals are painful to both sides: Beijing must abandon coercion against what it views as a secessionist territory, and Washington must drop its involvement in the final stage of China’s civil war. These steps are imaginable as part of the graduated, reciprocal cooperation Goldstein envisions; Taking them would reduce tensions between the United States and PRC. He is hopeful since “Taiwan and the Mainland have been taking concrete and frequently difficult steps toward peace.”

Goldstein proposes a similar approach for Africa. For China, he envisions greater humanitarian involvement, support for the African Union, dialogue with Washington, limits on arms sales and increased aid transparency. For the United States, he suggests encouraging Chinese humanitarian activities, increasing peacekeeping support, backing an expanded World Bank role for China, and closing AFRICOM. Such a course would dampen competition for natural resources and political influence in Africa.

Elsewhere the cases get tougher. In the Middle East, Goldstein ends his cooperation spiral with the United States pressuring Israel to sign the Non-Proliferation Treaty and China pushing Iran to recognize Israel. Wonderful ideas, but likely to face massive resistance by the other countries involved. Regarding India, Goldstein would have China back Delhi’s membership on the UN Security Council and the U.S. president shun the Dalai Lama and halt drone strikes in Pakistan. Big ideas worthy of debate, but, again, not easy to achieve.

In East Asia, the United States and China are at greatest risk of a military confrontation. The key to ensuring a peaceful, cooperative relationship is to transform how both nations treat each other and their allies. That won’t be easy.

For instance, for the Korean Peninsula, he envisions the United States withdrawing military forces, negotiating with North Korea and recognizing Pyongyang. I’ve long argued that these straight-forward policies are in America’s interest, despite being major breaks from past policy. For China, he suggests supporting four-power maritime patrols, military transparency with the South, reintroducing a military presence under the 1961 defense treaty and overseeing Pyongyang’s disarmament. In these matters, the North obviously has a vote. Pyongyang’s refusal would require development of a different cooperative spiral.

Toughest may be his proposals for both nations’ relations with Japan. Rather than seeing Beijing as always at fault, he attempts to understand the situation from China’s viewpoint. He notes that “Since 1995 the capabilities and preparedness of the US-Japan Alliance have been ratcheted up to such an extent that the alliance itself is now triggering a security dilemma that reflects Beijing’s acute security anxiety,” thereby “feeding China’s vast appetite for new and more capable military systems.”

That still doesn’t make his ideas easy to accept. He advocates that the United States reduce troop levels, push for joint Chinese-Japanese naval patrols, urge a Japanese visit to Nanking, press for joint administration of the Senkaku/Diaoyu Islands and turn the bilateral alliance into a more normal relationship. For China, he proposes accepting trilateral negotiations, guaranteeing supplies of rare earths minerals, settling East China Sea disputes, accepting Japanese constitutional reform regarding the military and backing Japanese membership on the UN Security Council. Again, the U.S. policy changes should come easily since they reduce a military role that no longer serves American interests. In contrast, Beijing would have to confront deep nationalist antagonisms toward Tokyo.

The difficulties in making such a cooperative approach work in so many areas are obvious. But Goldstein creatively challenges the confrontation ethos that appears to be taking over Washington. He forthrightly disputes the overused charge of appeasement, which he expects to be tossed in his direction. First, despite visions of the dangerous Chinese dragon, its record of military action and ambition so far is modest. Second, simply insisting on the status quo is a fool’s game, since an ever-stronger PRC cannot be expected to acquiesce forever.

Compromise and cooperation are the most obvious and, indeed, the only realistic paths. And they are fully consistent with American security. The United States is the world’s strongest military power, allied with or friendly to most industrialized states worldwide and most of the growing nations in Asia. The path forward should help Beijing feel similarly secure.

Today American foreign policy is dominated by a bipartisan consensus that what Washington says should go. That didn’t even work well in the immediate aftermath of the Cold War, when U.S. dominance seemed particularly complete. It certainly won’t succeed in the future, as that dominance diminishes. And there’s no way such an approach will work against a rising nation like China. Goldstein ends his remarkable book with: “[F]or America, there is no viable alternative to meeting China halfway.” He’s right.