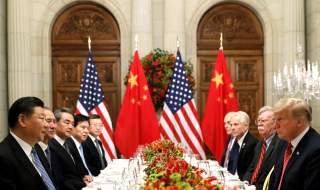 On the occasion of the seventieth anniversary of the founding of the People’s Republic of China, there is much head-scratching going on Washington, DC. Why hasn’t Beijing’s economy imploded yet? Why hasn’t China crushed the Hong Kong protests? How did China get ahold of 5G technology before us? How do they build quality warships so fast?

Yet, the biggest questions seem to revolve around the policy of engagement that the U.S. adopted since the early 1970s. Why and how have we enabled China’s rise? How is it that China did not become pro-Western like Japan and South Korea once Chinese had finally tasted the fruits of capitalism? Why didn’t the same mechanisms that facilitated massive foreign investment into China also cause it to embrace the “rule-based order” on the world stage? Put in a somewhat less polite form, these China questions could be boiled down to: how were America’s China experts [中国通] duped so badly?

The simple answer to these questions, of course, is that the vast majority of China specialists were never under any illusion that engagement would result in a China that looked something like the West. The hope, as some have put it, was at least that China would look somewhat less like North Korea and, indeed, contemporary China does not look anything like North Korea today.

But most Americans are frightfully ignorant of the rather dark reality of U.S.-China relations. Sadly and quite inexplicably, that ignorance includes many at the controls of the vast and ugly beast that is America’s dysfunctional and highly confrontational China policy today.

Not all the history of U.S.-China relations is negative, of course. When Dr. Peter Parker, a Yale-trained missionary and physician, first opened a modern clinic in China in 1835, the word spread far and wide. Chinese were said subsequently to view the American doctor and missionary as “little short of a deity.” About a century later, some heroic American doctors and nurses were in Nanjing trying to protect the Chinese population and recording the atrocities of the brutal Japanese conquerors. And let’s never neglect the extraordinary heroism and sacrifice of the American Volunteer Group (AVG), also known as the “Flying Tigers.”

Still, these important, positive moments are sadly outweighed by a history of suspicion and even blood-soaked hostilities. Indeed, about a year after the PRC was founded in 1949, Chinese and Americans were slaughtering each other in large numbers across the cold and bleak mountains of North Korea. Some Americans may stop to puzzle about the background surrounding the first-ever treaty between the United States and China and why it followed almost immediately upon the Treaty of Nanjing that ended the deeply humiliating Opium War.

Who can forget U.S. Navy Captain Josiah Tatnell’s statement at the bloody battle of the Taku Forts (1859) during the Second Opium War that “blood is thicker than water”? To be sure, a decent portion of the opium coming into China at that time was transported by American merchants.

Can the Chinese really still care that American armed forces played a critical role in breaching Beijing’s famously mighty defensive ramparts during the “Boxer Rebellion” in 1900? Need we still recall the apparently obscure massacre of Chinese workers from a few years earlier in Wyoming?  It was the Wild West, after all.

Moreover, recall that the famous May 4 Movement was partly directed at Washington, since President Woodrow Wilson had seemingly been willing to give entire Chinese provinces away to Imperial Japan during the Versaille Treaty negotiations. There is also the rather troubling detail that the U.S. Navy was cooperating with the Japanese Navy to police China’s interior rivers during the interwar period and earlier too. One classic account by an author who himself lived the Yangtze Patrol relates the horrible conversation between two “YangPat” sailors: “’You mean being fair only counts between Americans?’ ‘Well, white men.’ Bronson shifted in his chair. ‘I mean fair is different with slopeheads’ [Chinese]. They lie and steal. They’re dirty. Their yellow goes clear to the bone.”

The above history cries out for some humility in contemporary U.S.-China relations. But now, Americans must focus their historical lenses narrowly and get the details right. What happened in China seventy years ago in 1949 and why should Americans care today? Fortunately, a stellar book by Kevin Peraino appeared in 2017 that has precisely the needed detail on that momentous year based on meticulous archival research. China-watchers are strongly advised to take up this book. Below are five vital “takeaways” from that exhaustive study of the 1949 Communist victory in China that Peraino terms accurately A Force So Swift.

I’ve previously written in some detail the background to President Harry Truman’s emphatic statement in January 1950 that America had “no desire to obtain special rights or privileges or to establish military bases on Formosa or to detach Formosa from China.” Truman was not especially well educated or cosmopolitan. Like many other people from his time, he harbored prejudices against ethnic Chinese. Peraino reports that he wrote in a letter at age 27: “I think one man is just as good as another so long as he’s honest and decent and not a n****r or a Chinaman.” Yet, somehow, Truman seems to have matured and later arrived at a sound conclusion on the Taiwan question. Let us consider the more mixed legacy for American diplomacy overall from this period.

1) The United States intervened in the Chinese Civil War and tried unsuccessfully to tip the balance against the Communists. Peraino explains: “Truman and Marshall quickly lost Mao’s sympathy by playing a kind of double game – presenting the United States as honest broker while continuing to support Chiang’s nationalists militarily.” In the years after WWII, $2 billion was given over to the Nationalists and the U.S. military trained thirty-nine divisions to battle Mao’s forces. Chiang’s forces were ferried about on American planes and ships, moreover. Not only was this “pouring sand down a rat hole,” to borrow Truman’s artful phrase, but one must wonder how much earlier Mao would have prevailed were it not for this significant U.S. intervention in the Chinese civil war. From Beijing’s vantage point, this intervention continues to the present day.

2) The Nationalist government of Chiang Kai-shek executed a brazen interference campaign in American politics. According to Peraino’s research, “telegrams from Madame Chiang to her husband in early 1949 show that she was actively – and ‘secretly’ as she put it – recruiting sympathetic congressmen and military officials to make statements of support. She pleaded with the Generalissimo to send tens of thousands of dollars ‘urgently’ so that she could finish the job.” $2 million may have been funneled to the Republican Thomas Dewey in his unsuccessful campaign to unseat Truman. Attempting to recruit retired American generals to their cause, one such flag officer apparently recorded in a memo: “I would gladly accept $5 million or even more from rich Chinese.” Sadly, foreign money, including from Taiwan, continues to slosh around Washington, as it has for a very long time.

3) Starting in 1949, America resorted to subterfuge, including attempting to stir up rebellions in both Xinjiang and Tibet. In March 1949, Truman approved secret operations to “subvert Commmunist rule … by relying on ‘indigenous Chinese elements’ … ‘through appropriate clandestine channels.’” As the new U.S. intelligence apparatus mulled the possibilities, they were “particularly optimistic about the Muslim leaders in China’s Northwest.” During the Eisenhower Administration, these same operations involved smuggling arms to Tibetan rebels and long-time CIA direct funding for the Dalai Lama, according to an authoritative account.

4) The United States viewed the prospect of a Moscow-Beijing axis as particularly threatening and endeavored to drive a wedge between the Eurasian giants. American diplomats understood early on that there was the potential for a Sino-Soviet split and some expected that Mao might well pursue a Titoist path. Peraino explains: “The Soviets, the State Department analysts simplistically surmised, were ‘distrustful of all Chinese’ …” Understanding the history of Sino-Soviet hostility from the late 1960s and the later Cold War, one is greatly tempted to call these diplomats prophetic. However, it should be assumed today that Moscow and Beijing are both very well attuned to so-called “wedge strategies” and history is quite unlikely to repeat itself in this respect.

5) The hysteria following the end of the Chinese Civil War vastly exaggerated the Chinese threat and set Washington on a clear glide path to the Vietnam War. Just as Kennan and other senior statesman predicted the Sino-Soviet split, they also warned starkly against exaggerating the importance Mao’s victory and America’s influence upon that outcome. Not only was China a “backwater,” according to Kennan, but Mao’s victory was the result of “tremendous, deep-flowing indigenous forces which are beyond our power to control.” According to Peraino, fear in Washington over the “propaganda, intrigue, espionage, and conspiracy” resulting from the triumph of Communism in China caused American leaders to “set in motion a series of events that would profoundly alter American life – a first step into the morass of Southeast Asia’s wars.”