How Congress Should Really Evaluate an Iran Nuclear Deal 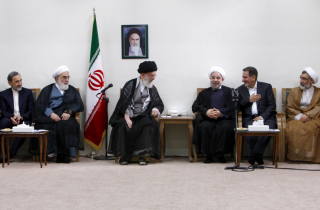 Iranian and Western negotiators in Vienna may or may not reach a final accord by June 30, exchanging sanctions relief for limitations on Iran’s nuclear program, and there is talk of another extension. Congress will have one month—two if an accord is reached during the summer recess—to approve or disapprove the deal. While recent statements by Iranian officials including Supreme Leader Ali Khamenei have raised doubts about how close the parties are to agreement, negotiations continue; and should an agreement emerge, Congress will face enormous pressures to endorse it.

From the outset, the Obama administration has briefed oversight committees but excluded Congress from its deliberative process, and few details from the negotiating table have been leaked. This has fed sentiment on Capitol Hill to increase sanctions pressure, and raised political resistance to an accord with Iran. Despite their misgivings, legislators and staff will be at a disadvantage in disputing the judgment of Secretary of Energy (and MIT nuclear physicist) Ernest Moniz about the adequacy of verification modalities and the estimated warning time to detect an Iranian nuclear weapons “breakout.” Congress, moreover, will face a stark choice: either endorse the negotiated terms, or be blamed for jettisoning the only available nuclear restraints on Iran while releasing the other P5+1 countries to lift their own sanctions.

There are three possible outcomes: 1) talks could end with no agreement; 2) an agreement may be reached and accepted by Congress; or 3) an agreement may be reached and rejected by Congress. In any of these scenarios, Congress will be keen to exercise its oversight function after having been largely sidelined during two years of talks. Perhaps predictably, some Members of Congress have advocated treating an agreement with Iran as an executive branch policy that will not outlast the Obama presidency, rather than as a U.S. commitment.

A more productive path for Congress may be to broaden the scope of its inquiry into the Iran negotiations, and explore some fundamental issues and assumptions underlying U.S. policy toward Iran that will remain relevant whatever the outcome of negotiations, and arguably more so in the aftermath.

For starters, the Obama administration should be asked to articulate its understanding of how policy is determined in Iran. Since his election as Iran’s President in June 2013, Hassan Rouhani has been portrayed as a “moderate” and proponent of reform. The White House touted President Obama’s September 2013 phone call to Mr. Rouhani as an historic conversation between the two “counterparts” after decades of bilateral estrangement. Washington’s Iran-watchers have devoted far more “ink” to Rouhani and Foreign Minister Javad Zarif, including their English-language tweets and YouTube video messages, than to other figures including Supreme Leader Ali Khamenei and his key regime lieutenants.

Congress should ask the administration to explain what power, authority or influence it believes the Iranian President exercises over the country’s affairs, including but not limited to the nuclear establishment. Is President Rouhani the chief executive setting policies and overseeing day-to-day stewardship over Iran’s economic assets, foreign activities, justice and law enforcement, control of the information domain and the like? And if major aspects of Tehran’s exercise of power are not under Rouhani’s purview, including activities hostile to United States and international interests, what have been the policy responses from the Obama administration since 2013, and what is the strategy going forward?

A second set of questions concerns economics and finance. The received wisdom in Washington is that Iran entered negotiations with the West because the pressure of economic sanctions had brought the country “to its knees.” No doubt declining oil and gas revenues, a weakened currency and interdiction of Tehran’s ability to conduct international financial transactions increased hardship for the people of Iran. The question for Congress is what effect this has had on the regime’s behavior.

The administration should be asked to explain what economic resources are under the direct control of Iran’s leadership and where that money has been going. Congress should know whether, if at all, existing sanctions have constricted Iran’s appetite for investment in its nuclear program, to say nothing of the considerable financial and weapons support it has been providing its allies in Syria, Lebanon, Iraq, Yemen and Gaza. As Iran’s Revolutionary Guards have long profited from smuggling operations enabled by the scarcity of goods caused by sanctions, it is appropriate for Congress to examine whether sanctions are indeed an effective lever on the Iranian regime’s behavior.

There are other areas Congress should explore in the process of weighing a nuclear accord. President Obama and Secretary Kerry have alluded to the prospect that a nuclear agreement could open the way to expanded U.S.-Iran relations and cooperation in other areas. A third area of focus, before U.S. reconciliation with Tehran’s clerics gains momentum, should be an unblinking look at Iranian politics and the elusive question of “reform” inside Iran. After voting irregularities, widespread protests and a severe regime crackdown marred the June 2009 reelection of Mahmoud Ahmadinejad in Iran, President Obama said, “There are people that want to see greater openness and greater debate and want to see greater democracy….I stand strongly with the universal principle that people's voices should be heard and not suppressed.” Yet four years later, when Hassan Rouhani was declared the first-ballot winner after the regime had disqualified 672 out of the 680 candidates registering to run for the presidency, it fell to British Prime Minister David Cameron to point out that this was “not democracy as we know it” as the Obama administration offered only congratulations.

If asked to spell out its perspectives on these larger questions, encompassing the Tehran regime’s activities and strategic priorities, could the administration’s Iran policy pass muster with Congress? Maybe the pain of sanctions was indeed the decisive factor that drew Iran to the negotiating table, and maybe President Rouhani and Foreign Minister Zarif came into the negotiations with a mandate to trade away as much of the country’s nuclear capacity as necessary to gain the requisite economic relief.

But if this was to be, simply stated, a sanctions-for-nuclear bargain, it is fair to wonder why President Obama made no serious effort at the outset to enlist the one party capable of lifting U.S. sanctions—Congress—to better to strengthen his hand in the negotiations, and equally, why he did not test Iranian intentions by seeking an authoritative channel to his true “counterpart”—the one figure in Iran capable of renouncing nuclear weapons-related activities: Supreme Leader Ali Khamenei. It is curious that Mr. Obama, having repeatedly pledged to do “everything that's required to prevent” Iran from obtaining a nuclear weapon, provided his own team so little negotiating latitude.

The oft-extended talks beg the question of whether for Iran this was ever primarily about gaining sanctions relief. With each expiring deadline, Iranian negotiators have emerged smiling and lauding the useful exchanges, even as both sides cautioned that no substantial points of agreement had been reached. What was on the table, and which side was unwilling or unable to accept it? If Iran was prepared to give up its nuclear weapons–relevant infrastructure but only if it gained more substantial sanctions relief, would not the administration have turned to Congress to solicit Members’ support for legislation that could close the deal and truly end Iran’s nuclear threat without military action?

Alternatively, if the P5+1 was offering sufficient sanctions relief but Iran was flatly refusing, at any price, to give up key elements needed for a nuclear weapons capability, what did the administration expect to accomplish by keeping this quiet and extending the talks?

Once the talks are over, with or without an agreement, it will be high time for Congressional oversight on the future direction and terms of U.S. engagement with Iran. Congress should explore the possibility that the Rouhani overture in 2013 to enter talks had a more complex agenda than securing sanctions relief, and that for its part the administration was pursuing a larger prize than curbing nuclear proliferation, namely a breakthrough in bilateral relations with Iran. Looking at destabilizing Iranian regime actions since 2013 in neighboring Arab countries, as well as its severe internal security measures—none of which encountered serious American resistance or objections—it is hard not to consider that perhaps this was Iran’s main goal all along.

Congress may have limited options in reviewing a nuclear accord, but it can and must do its part to assure that U.S. policy on Iran from here on will be guided by a deeper understanding of how the regime in Tehran sustains itself in power thirty-six years after the Islamic Revolution, and the implications for American and allied interests.