How the Coronavirus Crisis Could Damage Xi Jinping's Political Future 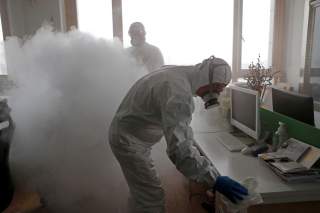 Xi has rapidly consolidated power since he assumed leadership of China's ruling Communist Party in 2012. In 2016, Xi was hailed as the “core” of the Chinese Communist Party (CCP) leadership. In 2017, Xi Jinping thought was officially incorporated into the CCP constitution. In 2018, Xi engineered a constitutional amendment that would allow him to continue in office for a third term in 2023. These developments led many to believe that Xi’s dominance of China could come to rival that of Mao, breaking with the collective leadership model favored by Deng Xiaoping. 2018, however, may have marked the apex of Xi’s power.

Xi has encountered serious challenges in his second term. The Chinese economy has been sluggish as the Sino-U.S. trade war rages on. In 2019, massive pro-democracy protests broke out in Hong Kong, threatening China’s control of the city-state and contributing to the traditionally pro-independent Democratic Progressive Party’s stunning victory in the 2020 Taiwanese presidential election.

The outbreak of the Wuhan coronavirus is an even graver challenge for Xi. For domestic consumption, the trade-war might have been attributable to a U.S. neo-containment policy aimed at preventing China’s rise, the Hong Kong protests attributable—although far less plausibly—to actions by the American and British secret services. But it is difficult to blame the public health crisis on the Americans or any other “reactionary external forces,” despite Beijing’s best attempt. Xi’s acquisition of dictatorial powers also makes it difficult to scapegoat local authorities in Wuhan. “When things go wrong or have a high risk of going wrong, then [the supreme leader] also [has] to bear all the responsibility,” according to Victor Shih, an expert on Chinese politics from the University of California at San Diego. Indeed, the Chinese state’s inability to contain and manage the crisis has exposed the extent to which Xi’s concentration of power has engendered a risk-averse and incompetent Chinese bureaucracy that lacks the capacity for action (buzuowei).

Cases of mysterious pneumonia were first reported in Wuhan, the capital of China’s Hubei province, on December 12, 2019. Wuhan, a city of more than ten million people, is also China’s transportation hub. Initially, local officials attempted to cover up the outbreak, hoping that the issue would go away on its own. A Chinese doctor, Li Wenliang, sent a message to fellow medics warning of an unusual pneumonia in December 2019. He was told by the police to “stop making false comments” and was investigated for spreading rumors. On January 11, 2020, the first case of death from the new virus was reported. The virus was not a major topic of discussion during the Hubei province annual plenary sessions of the People’s Congress and the Chinese People’s Political Consultative Conference, which lasted from January 11 to 17. The politburo meeting in Beijing on January 16 did not discuss the Wuhan coronavirus, despite the steadily rising number of cases.

On January 21, the Wuhan provincial government hosted a Chinese New Year cultural performance. Hubei’s top officials commended the performers for “beating the pneumonia paranoia” by putting on a great performance even though many of them were ill. The Chinese state did not quarantine Wuhan until January 23 when five million people had already left the city for the Chinese New Year holiday. On January 26, Xi finally presided over a politburo standing committee meeting to discuss how to contain the Wuhan coronavirus, which had by then triggered a full-blown public health crisis. By February 13, there were 59,895 confirmed cases of infection and 1,380 deaths.

The Chinese state waited for almost two months before implementing any serious measures to battle the virus, underscoring how sclerotic the bureaucracy has become. Xi’s relentless anti-corruption crusade spooks many officials. The cadres of government functionaries, apprehensive about being accused of corruption, have learned to do nothing and keep their heads down instead of governing and pushing for good policy initiatives, which was the path to career advancement in the past. The anti-corruption campaign has purged the vast CCP cadres of their most enterprising minds. The survivors believe in passivity and staying safe.

Xi has brought the cadres to heel by demanding unconditional loyalty to the party, and by extension, to himself, rather than competence. And the cadres, ever concerned about career advancement, understand that loyalty means not telling the truth in case it is uncongenial to the supreme leader.

Xi’s concentration of power has put him in a difficult position. In order to govern China, he had to rely on a bureaucracy that defaults to inaction and concealment. Importantly, the coronavirus outbreak, instead of the Sino-U.S. trade war and the Hong Kong protests, is the real test of the Xi administration’s ability to govern. Even Xi recognizes that fact. Beijing could de-escalate the trade war with agricultural orders massive enough to eliminate most of U.S.-China trade deficits in order to pacify President Donald Trump. Beijing could also stamp down the Hong Kong protests by force if they do not dissipate on their own. However, neither carrot nor stick at Xi’s disposal could eliminate the virus. What Xi needs now is a competent bureaucracy capable of working with public health experts to contain the virus outbreak.

The Emboldening of Xi’s Intra-Party Critics

Xi’s elimination of the presidential term limit of the People’s Republic of China in 2018 demonstrated his tight grip on power. However, this political maneuver also generated criticism from within the party. In 2018, Fan Liqin—a close friend of Deng Pufang, Deng Xiaoping’s eldest son—openly criticized Xi with a “big-character poster” (daizibao). Fan, by referring to historical CCP debates on the perils of personality cults, attacked Xi’s ambition to “dress himself up as the emperor and the savior of the Chinese nation.” If someone as brilliant as Mao could become arrogant and make serious mistakes when he concentrated power, then why would Xi be immune from the same corruptive effect of power, Fan asked.

There are signs that Fan’s criticisms might be gathering support because some people believe Xi to have mismanaged the Sino-U.S. trade war and the Hong Kong protests, despite the administration’s best attempt at blaming foreign reactionary forces on these developments. Qiushi, the leading mouthpiece of the CCP Central Committee, carried an unusual article that attracted almost no attention in the West on September 15, 2019. The article, which was based on a speech Xi made in 2014, discussed the importance of ensuring “orderly succession of top CCP leadership.” CCTV Evening News (Xinwen Lianbuo), one of the most-watched television programs in China, subsequently reported on the article’s publication at the beginning of the program. Importantly, this position undercuts Xi’s desire to pursue an unprecedented third term as the PRC chairman. This article’s publication, therefore, is a retreat that signifies Xi’s need to palliate intraparty critics who are unhappy with Xi’s concentration of power.

On August 18, 1980, Deng Xiaoping made a landmark speech that laid the foundation for instituting a system of collective leadership in China. “A good system would prevent bad people from abusing their power, while a bad system would prevent good people from doing good things, if not forcing them to do bad things.” “Stalin, as Mao once observed, undermined the socialist system [by concentrating power and cultivating a cult of personality]”. This is the ideological foundation (lilun jizhu) from which Xi’s intra-party critics operate to attack Xi. Consequently, Xi cannot silence and eliminate these critics, because it would necessitate a direct attack on Deng’s political legacy, a move that would risk severely undermining the CCP’s (and his own) authority.

Nonetheless, intraparty criticisms of Xi’s concentration of power had been little more than political annoyances for Xi, as they centered on abstract claims that concentration of power was bad. The mismanagement of the Wuhan coronavirus crisis, however, substantiates Deng’s warnings, as it reveals how the cadres’ fear of Xi engenders inaction, incompetence, and dishonesty.

On February 12, Beijing replaced the senior officials in Hubei. This is not necessarily an attempt to shift the blame onto local officials. In fact, removing these officials now could highlight how Beijing had appointed the wrong personnel to Hubei in the first place. Furthermore, Xi had no choice but to replace the top CCP leaders in Hubei with his proteges, a move that could further erode Xi’s authority if they do not resolve the public health crisis quickly. The safest strategy for Xi to play in Hubei would have been to let the previous team take responsibility and deal with the crisis that was largely a result of their incompetence.

But Xi did not choose the safe option, which suggests that he might be facing intraparty pressure to contain the crisis swiftly; his political future is tied to his administration’s management of this crisis. However, Xi cannot count on the CCP leaders from Hubei, who supervised the initial outbreak, to take effective steps. Their political careers are over anyway, and they have no political incentive to do a good job. Taking stock, the Wuhan coronavirus crisis casts a long shadow of uncertainty on Xi’s political future as the number of both infections and fatalities continues to climb.