How to Create a Baltic Bulwark Against Russia 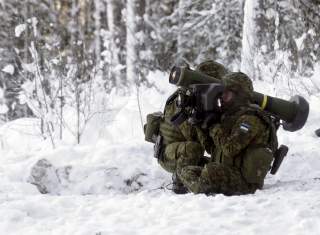 The North Atlantic Treaty Organization was founded on April 4, 1949. Unfortunately, today European members of NATO repeatedly fail to maintain their militaries. However, some of them have not forgotten history and the importance of self-defense. America would be wise to press the Baltics and NATO-Europe to do more to fortify themselves.

Seventy years ago, the Soviet Union forcibly deported of ninety-five thousand people from the Baltic states to Siberian gulags for alleged disloyalty. The now independent Baltic states of Estonia, Latvia, and Lithuania vividly remember that tragedy and take defense seriously. Indeed, an oft-cited 2016 report by the RAND Corporation found Russia could seize the Baltics in three days and NATO would be unable to quickly help. Meanwhile, Americans are rightly concerned with the cost of war, and Washington is increasingly focused on China.

But there is a solution the Baltics are embracing and should double-down on—total defense.

Total defense is the idea that everyone is a part of their country’s security and must be prepared to resist any invasion. It is a defensive, whole-of-society strategy that raises the cost of invasion and lowers the chance of enemy success. Given Russia’s invasion of Georgia in 2008 and Ukraine in 2014, this idea is gaining traction.

At a minimum, total defense includes government information campaigns with brochures and training on vigilance and how citizens should respond to war. This includes looking out for the “little green men” (special operations forces without insignia) Russia uses to deny official involvement. Total defense also includes conscription and official paramilitaries and civilian groups trained as partisans, saboteurs, and scouts.

All three Baltic states have adopted total defense to varying degrees, with Lithuania starting in the 1990s. Estonian defense plans call for total defense, and Latvia has put the strategy in its constitution.

Moreover, both Estonia and Lithuania have conscription, and all three states have government-sanctioned paramilitary organizations. Estonia has a militia called The Defense League, Latvia has the National Guard, and Lithuanian has the Riflemen’s Union. Militias, civil associations, police officers, veterans, reservists, and any able-bodied citizen is expected to assist regular armed forces and resist independently if necessary.

Total defense works and has a history. One example includes an attempted Russian-backed coup in Estonia in 1924. Russian special forces in Estonian uniforms, along with local collaborators, attacked government, communication, and military installations. But on- and off-duty military officers noticed something amiss and reacted quickly, in some cases just scaring the attackers off by fighting back.

According to RAND, Switzerland also practiced total defense during the Cold War with “infrastructure denial” by “prepar[ing] every major road, bridge, and other key infrastructure near its borders for rapid demolition.” If invaded by anyone, the Swiss planned to destroy their transportation infrastructure and use pre-planned traps and camouflaged defensive installations to stall an enemy's advance.

American support for total defense of the Baltics is the most realistic and politically feasible option. Washington is wary of spiraling costs and putting additional over-stretched soldiers’ lives at risk. Additionally, most European members of NATO don’t take their own defense seriously. Encouraging the Baltics to help themselves is a good thing for everyone. America benefits when nations can defend themselves instead of relying on Washington to save the day. America is a balancer-of-last-resort, as alliances traditionally function.

It is unlikely America would be willing to provide the seven brigades, tanks, artillery and planes RAND estimates are needed in the Baltics indefinitely to deter Russia. Washington is busy fighting six peripheral wars in Iraq, Afghanistan, Syria, Yemen, Pakistan, and Somalia. Besides, American nuclear weapons are committed to NATO and serve as a major deterrent.

European allies must do far more to help—that they have the capacity but lack the political will to do so is shameful. In 2011, the United Kingdom, France, and Italy ran out of ammunition and needed America's firepower and logistical help defeating Libya's Muammar Gaddafi, a Third-World dictator. Also, Germany’s military is in bad shape—about 43 percent of German tanks and 25 percent of its air force don’t work. Finally, the United Kingdom doesn’t have enough ships to escort its two aircraft carriers.

What America Should Do

The Baltics cannot win a conventional war, but they can bleed an attacker through stubborn insurgency.

Washington should encourage the Baltics to double down on total defense through diplomatic encouragement and pursue policies that force NATO-Europe to do more to support and defend them. Done correctly, it would turn the Baltics into porcupines that would give Russia pause without substantial costs or risks to America.

Furthermore, the Baltics must ensure crisis instructions could be disseminated despite jamming and cyberattacks. Militias and citizens need to know their terrain, weapons and supplies locations, and how to recognize a coup attempt.

NATO has a problem when its members don’t want to do what is necessary to defend themselves, but the Baltics are an exception. Washington should press the Baltics in achieving total defense and NATO-Europe to take the lead in filling the gaps. This will free up the United States to focus on vital priorities at home and in Asia.

John Dale Grover is an assistant managing editor with the National Interest. He is also a fellow with Defense Priorities and a writer with Young Voices. His articles have appeared in The Hill, Fox News, Real Clear Defense, and The American Conservative.