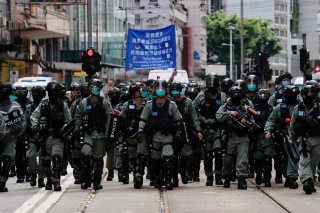 Are the United States and China irrevocably headed on a course toward confrontation? Secretary of State Mike Pompeo is calling for a global anti-China coalition and met in London with Nathan Law, a politician and activist in Hong Kong, as well as with the last British Governor-General Chris Patten, a stalwart defender of Hong Kong’s freedoms. The Trump administration has also ordered the closure of the Chinese consulate in Houston, thereby further heightening tensions between Washington and Beijing. Some observers detect, or indeed are even promoting, the rise of a new cold war to replace the old U.S.-Soviet confrontation. Whether this is a development that can be avoided has provoked widespread controversy in America and elsewhere. America’s allies in the region shown scant avidity for a clash with Beijing even as they chafe at its attempts to flex its muscles abroad.

The central international flash-point is currently Hong Kong. Recent developments in Hong Kong, culminating in the promulgation of a new national security law that appears to abandon Beijing’s earlier commitment to allow Hong Kong autonomy under “one country, two systems,” have raised international alarm about China’s intentions. What are the goals of Chinese Communist Party leaders in Hong Kong? Are they in fact violating prior agreements with the United Kingdom and promises to the people of Hong Kong? What are the implications for Beijing’s broader regional behavior and its relationship with the West? And how will it deal with the international response to its actions in Hong Kong?

Below is a link to a video of webinar featuring a panel of prominent experts whose discussion was moderated by National Interest editor Jacob Heilbrunn:

· Ambassador Kurt Tong, who served as United States Consul General and Chief of Mission in Hong Kong and Macau from 2016 to 2019 and is now a Partner at The Asia Group in Washington, DC.
· Professor James Feinerman, the James M. Morita Professor of Asian Legal Studies and Co-Director of the Georgetown Law Asia Program at Georgetown University.
· Professor Steven Tsang, the Director of the SOAS China Institute at the School of Oriental and African Studies, University of London.
· Dr. Paul Heer, a Distinguished Fellow at the Center for the National Interest and a former National Intelligence Officer for East Asia.