How Dangerous Is the Islamic State to Israel? 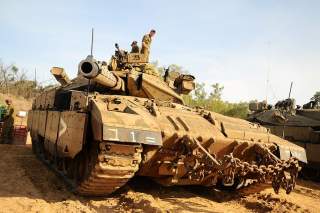 At the end of October 2015, Islamic State uploaded its first video in Hebrew and threatened that “not a single Jew will remain in Jerusalem.” Two months later, an audio tape of Abu Bakr al-Baghdadi, the leader of Islamic States, surfaced. He threatened Israel directly for the first time: “Palestine will not be your land or your home…It will be a graveyard for you.” A few weeks later, in January 2016, Israel’s president Reuven Rivlin stated: “The Islamic State is already here [in Israel].”

The first firefight between the IDF and an Islamic State-affiliated group in the Golan Heights, and a foiled terrorist attack on Israel’s national football team in Albania, both at the end of November 2016, have evoked the question: how dangerous is Islamic State to Israel?

In order to answer this question, one should assess three theaters: (1) Israel’s border areas where Islamic State-affiliated groups are active; (2) the Palestinian territories; (3) Israel.

The Border Areas: Sinai and the Golan Heights

Cairo is confronted with a serious insurgency in the Sinai Peninsula. Wilayat Sinai, the Sinai Province of Islamic State, concentrates its attacks on Egypt’s security forces in the Sinai and has caused hundreds of casualties. However, since summer 2016, Egypt’s counterinsurgency campaign seems to have gathered momentum; the attacks of Wilayat Sinai have become less effective and complex. Although the border is fairly quiet from Israel’s perspective, the IDF believes that Wilayat Sinai will eventually attack Israel as well. Thus, the IDF has already intensified border controls.

The Syrian civil war confronts Israel with a highly volatile security situation in the northern theater. There were several incidents along the Syrian-Israeli border in the last years, ranging from (accidental) mortar and artillery fire to targeted attacks on Israeli military patrols. Israel, however, has kept its deterrence up with occasional aerial attacks in Syria. Nevertheless, the overall security situation in the Golan Heights is rather quiet.

At the end of November 2016, however, a reconnaissance unit of Israel’s Golani Brigade was attacked by the Khaled Ibn al-Walid Army (an Islamic State-affiliated group formerly known as the Yarmuk Martyr Brigades.) This was the first direct military encounter between Israel and Islamic State. Only time will tell if this incident turns out as an isolated case or turning point in the Golan Heights.

Another scenario Israel should closely monitor is a possible destabilization of Jordan by Islamic State. Keep in mind that Israel shares its longest border with the Hashemite kingdom. Frustrated members of the Muslim Brotherhood, Salafi Palestinians and economically-neglected Bedouin tribes might present a base for recruitment. However, the Jordanian security agencies have proved capable and loyal to the regime.

So far, there have been very few indications of a direct Islamic State presence in the West Bank. Besides the effective work of Israeli security agencies (sometimes in close cooperation with Palestinian counterparts), the support for Islamic State in the West Bank seems to be limited. Polls have shown that only three percent of the Palestinians consider Islamic State as “truly Islamic” (in contrast to nine percent in Gaza.) Nonetheless, Islamic State promotes its cause: in July 2015, the organization uploaded a video that featured Palestinian fighters in Syria who called on their fellow countrymen to pledge allegiance to Islamic State. At least some of the lone wolf attackers who triggered the terror wave that hit Israel between October 2015 and spring 2016 and caused the death of more than forty Israelis, had been inspired or incited by Islamic State. The deadliest terrorist attack in this regard was committed by two residents of Yatta in the southern West Bank. They opened fire in a restaurant at Tel Aviv’s Sarona Market and killed four Israelis on June 8, 2016. Israel’s Shin Bet emphasized that the attack had been inspired by Islamic State; however, the terrorists had acted alone without direct support of the organization. Thus, Islamic State is above all an inspiration for Palestinians willing to resort to violence.

The Gaza Strip, however, is a different story. Salafism is deeply rooted in parts of Gazan society. Local Salafist groups pledged allegiance to Islamic State. Al-Baghdadi, however, rejected the offer and pointed out that the groups were too weak and ineffective to be considered an Islamic State province.

The Salafist groups are trying to drag Israel into another military escalation by provoking counterattacks through rockets and IEDs along the border fence. They hope to weaken Hamas, their current main enemy. Islamic State and their local supporters consider as misguided Hamas’ core objective, the national struggle of the Palestinians, and promote the establishment and extension of the Caliphate instead. Hamas, in return, perceives the Salafists as a serious challenge to its rule in Gaza and cracks down vigorously on them from time to time.

Thus, Israel must keep a close eye on Islamic State-related activities in the Palestinian territories. However, internal developments in the Gaza Strip defy Israeli control for the most part.

The most dangerous scenario in this context derives from Arab Israelis who support Islamic State. Israel’s Shin Bet has perceived an increasing trend of ISIS-inspired attacks and has qualified this as a severe threat to Israel. The most important medium for recruiting and for spreading propaganda is the internet. Polls have shown that in 2015, around sixteen percent of the Arab Israelis approved ISIS. This seems rather troubling when compared to far less approval in other Arab States, for instance in Jordan (three percent), or in Lebanon (zero per cent). In 2015, some forty Israelis were arrested because they were suspected of supporting Islamic State (the organization had been outlawed in Israel in September 2014). In 2016, 46 Israelis were in prison because of their connection to Islamic State.

So far, Israeli security agencies have managed to neutralize most Islamic State cells at an early stage. Thus, the number of terrorist plots that crossed the line from planning into action is limited. Some Israelis were already arrested when they were just about to join Islamic State. In August 2015, for instance, the Arab Israeli Iman Khanjo was detained in Turkey and brought back to Israel. The 44-year-old doctoral student in Islamic Studies and mother of five wanted to cross the border to Syria and join Islamic State. Others, however, were more successful. A 23-year-old Israeli used a paraglider to fly from the Golan Heights to Syria in October 2015. It is estimated that fifty to one hundred Israelis are fighting in Syria/Iraq; several dozen are probably fighting with Islamic State.

The returnees, however, pose the greatest risk. Around a dozen Israelis came back after fighting and were arrested. In September 2016, a whole family was detained when they returned to Israel. The couple with three kids from the Israeli city Sakhnin had traveled to Turkey and joined Islamic State after crossing the border to Syria.

The most severe threat emerges from terrorist cells in Israel. In July 2015, six residents of the Bedouin village Hura, including four teachers, were arrested for setting up an Islamic State cell and distributing propaganda under their students. In December 2015, it was revealed that Israel’s Shin Bet had detained five Arab Israelis in Nazareth who had pledged allegiance to Islamic State. The cell was already in possession of weapons. In October 2016 six Arabs from Shufat (Jerusalem) were charged with the planning of an Islamic State-inspired terrorist attack.

Although Israel’s security agencies stopped most ISIS-related terror cells at an early stage, there is a troubling trend: young lone wolf terrorists. Individuals not affiliated with a terrorist organization, or small, independent cells conduct terrorist attacks, inspired and incited by Islamic State propaganda without direct links to its commando structure. The terrorist attacks in San Bernadino (December 2015) and Orlando (June 2016) in the United States, as well as in many other countries in the world, show that this is a global problem.

In the context of Israel’s various security risks, Islamic State currently is a substantial but not necessarily a primary threat to the Jewish state. The Islamic State-affiliated groups at Israel’s borders in Egypt and Syria present no existential threat. Even if they decide to turn on Israel, they have never been confronted with a first-rate military force like the IDF before. After all, as Amos Yadlin pointed out, Islamic State consists of a couple of thousand terrorists armed with Kalashnikovs on pick-up trucks.

The Arabs in the Palestinian Territories and particularly in Israel present a much more severe threat. Although Israel’s security forces prevented most of the terrorist attacks through ceaseless efforts, they have detected a growing identification with Islamic State.

An attack on Israel would be a tremendous propaganda victory for Islamic State. Thus, the more Islamic State is suffering military setbacks in Syria and Iraq, the more probable terrorist attacks against Israel become. The recently foiled attack on Israel’s national football team in Albania in November 2016 suggests that Israeli or Jewish institutions abroad could become possible targets as well.

Marcel Serr is the assistant director of the German Protestant Institute of Archaeology in Jerusalem (GPIA).