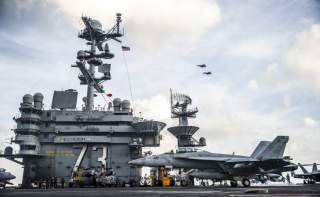 China’s reemergence as a wealthy and powerful nation is a fact. In recent decades its rise has been unprecedented, moving from the tenth-largest economy in 1990, to the sixth-largest economy in 2001, to the second-largest economy in 2010. According to the International Monetary Fund (IMF), China now surpasses the United States in terms of purchasing power parity. By the same measure, China’s economy was only half the size of America’s a decade earlier, and it is this trajectory that is molding assumptions about the future regional power balance and order across the Indo-Pacific. Recent declines in growth and rising questions about future stability have yet to alter most perceptions about tomorrow’s China.

China’s deepening integration with the regional and global economy underscore the difficulty of pushing back when China transgresses rules and norms. Take the issue of infrastructure. Infrastructure will gradually redraw the strategic economic and security connectivity of the twenty-first century, and China’s infrastructure prowess has been on prominent display of late. President Xi initiated the recent Asia-Pacific Economic Cooperation (APEC) forum with a speech touting the linear projection that China will invest some $1.25 trillion over the next decade overseas, and wants to invest $40 billion in re-establishing the old Silk Road while also building a new Maritime Silk Road. These sums are in addition to China’s proposal for a new $50 billion Asia Infrastructure Investment Bank. Like the New Development Bank (previously called The BRICS Development Bank), these schemes chip away at the existing Bretton Woods international economic architecture with bodies of uncertain governance. As Indian Union Commerce Minister Nirmala Sitharaman put it at a recent conference, “If Bretton Woods institutions will not provide infrastructure financing for emerging economies, then we will have to find alternatives.”

China is filling a vacuum in infrastructure financing. But rather than reflexively opposing and expecting friends in Indonesia, India, and elsewhere to turn aside opportunity, the United States would be far better off seeking to create opportunities through existing institutions. The United States should be reinvigorating existing economic institutions like the IMF, World Bank, and the Asian Development Bank, while ensuring that any new institutions adhere to transparent and based on agreed-upon principles.

The Difficulty of Trust-Building

To listen to some analysts, the focus of Sino-American relations should be on trust-building. But talking about trust is not the same thing as increasing trust. Not even confidence-building measures (CBMs) aimed at reducing military tensions are guaranteed to reduce such tensions.

Take the recent bilateral summit meeting between President Xi and President Barack Obama on the margins of the APEC summit. The atmospherics were cordial, there were no substantive changes over territorial and sovereignty issues—or for that matter, any of the most neuralgic security issues driving strategic competition in the Asia-Pacific. China committed itself to nothing specific or binding. The United States accommodated the appearance of improved military-to-military relations despite a lack of any substantive measure. Two confidence-building measures received a lot of press, but they are at best frameworks on which to build rather than new agreements. A CBM on Rules of Behavior for the Safety of Air and Maritime Encounters at this point creates a military-to-military dialogue on avoiding surface ship collisions, but neither side is committed to anything that it was not already obligated to under existing international accords. Over time, of course, as new annexes are added and dialogue progresses, perhaps this will provide the basis for more predictability in military operations. The other CBM on the Notification of Major Military Activities is more encouragement than direction, and what constitutes a major strategic development is totally vague. At best, the measures provide a basis for future cooperation. The same can be said with regard to calls for progress on moving from a Declaration of Conduct to a Code of Conduct, even while China continued to build artificial islands and potentially military installations from submerged features in the South China Sea.

At the Center for a New American Security, we recently hosted a delegation of officers and analysts from the People’s Liberation Army’s National Defense University. Conceding that nothing had been done to solidify a genuine reduction in maritime tensions, they asked for a list of practical steps China could take to reduce the prospect of escalation in the East and South China Seas. We provided them with specific ideas--from clarifying the 9-dash line claim, to including coast guard forces and not just naval forces in discussions on avoiding incidents at sea, to signing a binding code of conduct, to avoiding dangerous maneuvers around our ships and planes within their Exclusive Economic Zone. They responded: "No, give us realistic things we can do." It is difficult not to think that China wants the appearance of peaceful rise, not the reality. It does not wish to confront the United States, but it is happy to take advantage of our hesitation and indecisiveness. China appears to favor a “new type of major power relations” with the United States in order to compel the United States to recognize China’s core interests above the interests of its neighbors—even though when it comes to defining its maritime interests they appear to expanding, from control over near seas to extended global sea lines of communication.

We have to accommodate a rising China, but we do not have to accommodate imprudent and even aggressive behavior. China’s increasing wealth is a fact, but so is its pattern of maritime coercion. China is seeking to use multiple levers of power to coerce its neighbors to give way to Chinese dominance. Indeed, China has recently resorted to a pattern of “tailored coercion” in maritime Asia. While engaging in protracted diplomatic discussions on a binding code of conduct or new confidence-building measures, China has systematically used public diplomacy, legal, and psychological instruments of power to redraw contemporary boundaries. Generally China has sought to do this incrementally, in salami slices less likely to trigger escalation or strong responses. Because so many neighbors lack the quality and quantity of Chinese coast guard, law-enforcement, and other paramilitary forces, it has been relatively easy to stake a claim in these often disputed areas.

It is tailored in its design to be forceful with minimal military force. The use of coast guard and other law-enforcement platforms, coupled with other power, however, and more its pattern of assertiveness that stirs anxiety and concern. A China that is both militarily and economically strong and determined to have its way unilaterally through coercion if necessary is a problem for those countries in the region that prefer an inclusive, rules-based approach to cooperation.

From unrelenting patrols in the contiguous and territorial waters of the Senkaku/Diaoyu Islands, to the declaration of an Air Defense Identification Zone (ADIZ) last November, Chinese vessels and aircraft in the East China Sea are posing a heightened risk of an incident with Japan and the United States. In two instances in the spring of 2014, Chinese SU-27 aircraft approached within 30 meters of Japanese surveillance aircraft. Similarly, in the South China Sea, China’s “cabbage strategy” around Scarborough Shoal and the Spratly and Paracel Islands plants Chinese maritime forces and then promotes their growth. Photographs taken in March show China’s reclamation of Johnson South Reef in the disputed Spratly Islands, and Beijing’s reclamation of land features in various parts of the South China appears to be intended to help China extend its power projection while bolstering legal claims. Johnson South Reef is also the site of a Vietnam-China naval skirmish that left more than 70 Vietnamese dead in March 1988.

Although China is not alone in seeking to advance its territorial claims and maritime interests, China’s behavior is uniquely escalatory. That is why U.S. Secretary of Defense Chuck Hagel singled out China’s “destabilizing, unilateral actions” against its maritime neighbors at this year’s Shangri-La Dialogue in Singapore. The placement of a drilling platform in disputed waters off Vietnam in May 2014, coming after months of concerted diplomacy to improve Beijing-Hanoi relations, is particularly perplexing to many in the region. Not only was it a reminder that in 1974 China used force to occupy the Paracels during a particularly vulnerable time for Vietnam; it also underscored the level of assertiveness China is prepared to use today. When Vietnam responded by trying to match the level of Chinese ships around the oil rig, China responded each time by upping the ante in the number, type and tactic of the ships.

Researchers at the U.S. National Defense University looked at more than 1,200 military, paramilitary, legal, economic, diplomatic, and administrative actions undertaken by claimants in the South China Sea from 1995 and 2013. Even based on unclassified data, Dr. Christopher Yung and Patrick McNulty found that China had dramatically escalated its assertiveness since 2009. With respect to all actions, China accounted for about 55 percent of the total actions, with a significant jump in assertive actions since 2009. Military and paramilitary actions followed the same trend, with a spike in military assertiveness in the South China Sea clearly seen over the past few years, peaking at 62 actions in 2012 alone. A more complete, classified accounting would likely show a similar spike but even far more actions.